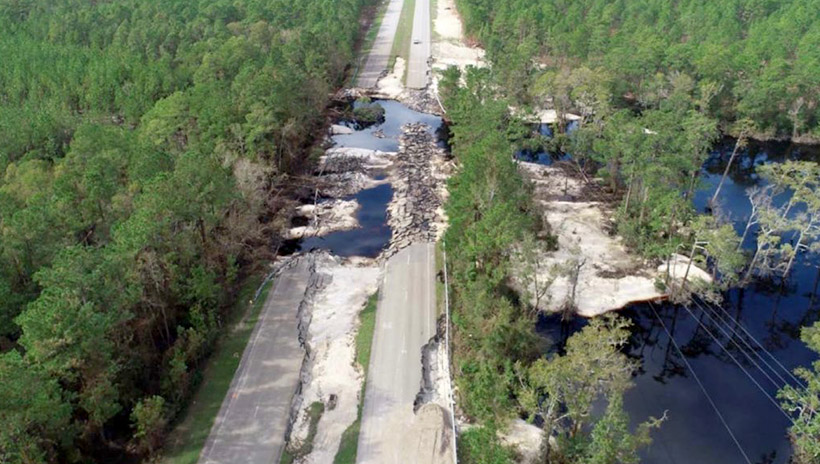 Jones County residents are still feeling the effects of recent hurricanes. At least one of the county's three towns remains flooded, and two of its six schools were condemned.

Those facts came out during a Wednesday, Aug. 28, news conference at the state Legislative Building. Republican state lawmakers and U.S. Sen. Thom Tillis, R-N.C., used the briefing to emphasize the slow pace of the Cooper administration's response to hurricane recovery.

North Carolina has spent just 7% of its disaster relief funding over the past 500 days, Tillis said.

Many families in southeastern North Carolina are still without homes nearly a year after Hurricane Florence devastated that part of the state, and three years after Hurricane Matthew. The state got $236 million within a matter of weeks, Tillis said.

A year-and-a-half later, 93% of that money hasn't been spent, Tillis said.

"If you're someone who was hit by Matthew or promised a buyout, didn't get the buyout, rebuilt your home, and had it destroyed in Florence, you've got to be asking the question, 'Why isn't that money flowing sooner?'" Tillis said.

Tillis said he plans to file a bill after Labor Day to address some of the disaster concerns. Still, he said, it's difficult to explain why the majority of the funding has been withheld.

If the governor is correct in saying $93 million has been "spent or committed," that still would only amount to 39% - or less than half - of the $236 million originally awarded.

In his release, the governor says North Carolina "doesn't yet have one single penny of CDBG-DR federal housing money that's specifically for Hurricane Florence survivors." That statement is technically true, but excludes key information.

Although no CDBG-DR money was allocated specifically for Hurricane Florence, the Trump administration in June signed a bill into law allowing states to interchangeably use funds from Hurricane Matthew for Hurricane Florence. Several Republican state lawmakers, who spoke to the lingering effects of the storms, joined Tillis for the news conference.

Last year, flooding in Jones County damaged Trenton Elementary and Jones Middle School so heavily that teachers and students had to relocate to other buildings. As of June, the town of Trenton remained underwater, with the courthouse and jail yet to reopen.

"We're constantly having to see the suffering in these folks' eyes - they're out of their homes, out of their communities," said Rep. Brenden Jones, R-Columbus.

Tillis emphasized it will be difficult to ask the federal government for more if the state fails to spend what it already has.

A General Assembly program evaluation report says North Carolina has "consistently" been identified as a slow spender, a term referring to organizations that spend less than 10% of the amount they would need to use up the grant by the proposed end date.

Even South Carolina, which saw less storm damage, had spent more on Hurricane Matthew recovery, dishing out 22% of its CDBG-DR award by December 2018, compared with the 1% North Carolina had spent over 10 months, the report showed.

"I'm telling you, it hurts our case when we're designated as a slow spender, when other states that experienced similar damage are doing much, much better," Tillis said.

"This is not about political in-fighting," he added. "This is about producing results for the Democrats, Republicans, city officials, county officials, and businesses that want that money released, so that we can build a case for the next money that needs to come to this state."