After an eventful weekend at home, the ECU soccer team will have its first road matches of the season when the Pirates head north to take on Virginia and Radford. east carolina university, ECU, women's soccer, gameday, virginia, radford, august 29, 2019
Home
Categories
Login 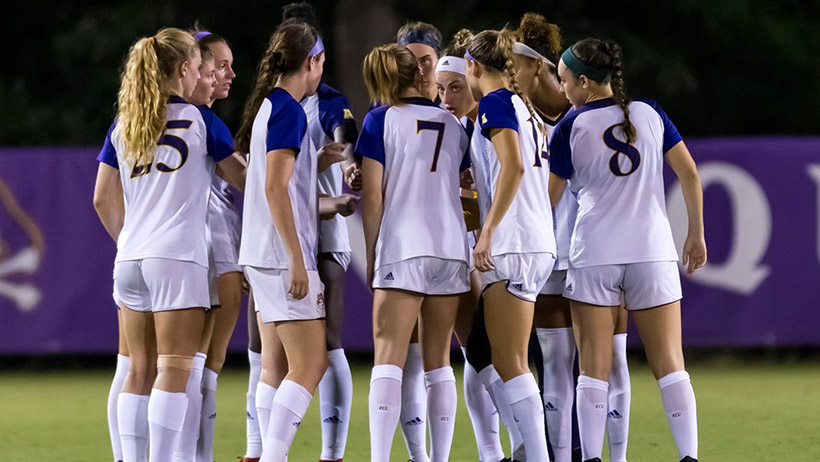 GREENVILLE, N.C.     After an eventful weekend at home, the ECU soccer team will have its first road matches of the season when the Pirates head north to take on Virginia and Radford.

"We have two very good opponents this weekend and it will be a tough road test," said head coach Jason Hamilton. "We have talked about needing to be good on the road this season in conference so we will use these opportunities to prepare for that. Both teams were successful last season winning 16 games each, and both are off to a great start this season, picking up where they left off."

ECU (0-0-1) had its original home opener against George Mason rained out with the Pirates leading 1-0 at the half. ECU officially got its season underway on Sunday when Daria Draovitch's late goal salvaged a 1-1 draw against Richmond. Although ECU only left with a draw, the Pirates were on the front foot for most of the game, taking 20 shots to just 10 for Richmond while also controlling 61% of the game's possession. Cashlin Copley led the offense with four shots, while Jenna Dages, Grace Doran and Jayda Hylton-Pelaia all took three. Hylton-Pelaia, Melanie Stiles, Carsen Parker, Kim Sanford and Marianna Shurina played all 110 minutes for ECU.

Virginia (2-0-0) started its season in a dominant fashion befitting the Cavalier's No. 9 ranking in the national polls. The Cavaliers topped UC Irvine 7-0 in their home opener before putting six unanswered goals past Liberty while on the other end, Virginia allowed just one shot over 180 minutes of play. Diana Ordonez had an excellent start to her collegiate career, scoring a goal to go with two assists against the Anteaters before bagging a hat trick against Liberty. Overall, eight different Cavaliers scored over the two games and nine players had at least one point.

"I think Virginia will be a contender for the College Cup this season, I watched a lot of teams last week and no one has impressed me as much as them," Hamilton said. "This is a great experience for our group to go on the road and play one of the top programs in the country in a very tough environment, there is no better way to prepare us for the AAC. I am excited to see our ladies go out and compete and challenge themselves."

Like Virginia, Radford (2-0-0) started its season with a pair of shutout victories. The Highlanders opened with a 3-0 home victory over Appalachian State before hitting the road and leaving with a 2-0 win at Mount St. Mary's. Kayla Thomas was named the Big South Defensive Player of the Week after racking up four points during the two wins, with an assist against Appalachian State and a goal and assists against Mount St. Mary's. Gabi Paupst also had four points, scoring a pair of goals against the Mountaineers.

"Hopefully we can learn from last weekend with Richmond when it comes to the second game of this leg," Hamilton added. "We beat Radford pretty good last season, it was one of those days that everything clicked for us. Last year is gone, and we can't even think about that. We are playing at their place and they will be a different team than they were the second game of the season last year."

ECU is 0-1-1 all-time against Virginia, with the most recent meeting coming in 2017. The two teams tied 1-1 in Greenville on that occasion, with Marianna Shurina getting the assist on the Pirate tally. The Cavaliers took a 4-0 win in 2004 which was the only time the two squads have met in Charlottesville.

The Pirates have had more success against Radford, owning a 5-2-0 record against the Highlanders. Last season, Radford came to Greenville for ECU's home opener and the Pirates claimed a 5-1 victory. Jenna Dages, Grace Doran, Carsen Parker and Kat Gonzalez all scored for the Pirates while Morgan Dewey and Jayda Hylton-Pelaia had assists. It was the first meeting between the two schools since the 2001 season. In three meetings at Radford, ECU is just 1-2-0.