More than two hours into a long-anticipated meeting, audible moans swept the packed room where the State Board of Elections authorized several voting technologies for the 2020 election — including an updated version of controversial touch-screen devices. carolina journal, board of elections, voting machines, touch-screens, august 26, 2019
Home
Categories
Login 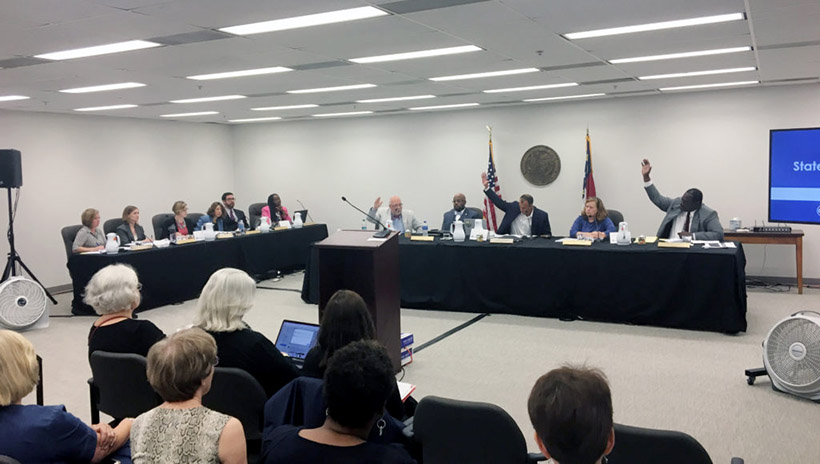 More than two hours into a long-anticipated meeting, audible moans swept the packed room where the State Board of Elections authorized several voting technologies for the 2020 election - including an updated version of controversial touch-screen devices.

In a 3-2 decision, the board approved Election Systems & Software, followed by unanimous approval of two other companies, Hart InterCivic and Clear Ballot.

County election boards will choose among the approved vendors.

ES&S provides a touch-screen device. After voting, the results are printed on a paper slip resembling a grocery-store receipt with a barcode which is read and recorded by the machine. While barcodes are unreadable to voters, ballot slips allow voters to verify that the machine recorded their votes.

About a third of North Carolina's counties - including Mecklenburg, the state's largest - have used touch-screen devices. Officials in those counties have balked at rejecting them.

The other vendors use an optical scanner which reads the paper ballots voters have marked. Voters feed their ballots into the scanner.

Democratic board members Stella Anderson and Jeff Carmon opposed the barcode technology, saying if voters can't verify that the machine accurately recorded their vote, it could jeopardize their faith in the election process. Those in favor - Republicans Kenneth Raymond and David Black, along with newly appointed board chairman, Democrat Damon Circosta - say they're giving county officials the freedom to choose the technology they prefer.

Circosta acknowledged that every piece of new technology needs to be tested for hacking vulnerabilities, but also noted the board uses technology in all aspects of voting.

But county board officials, he said, were eager for the State Board to make a decision.

"I've listened to other experts. These are the folks who are running our elections in North Carolina. What they're telling me is, 'This has been an over two-year process, and we've had enough of not knowing where to go.'"

The public comment period featured passionate pitches from lawyers, advocacy group representatives, and voters who rejected the barcode technology. They cited its higher costs and said the system could leave elections more susceptible to hacking or unintentional error. Only one speaker, ES&S manager Will Wesley, spoke for the technology, noting it has been used in 1,200 jurisdictions around the U.S.

Before the vote, Anderson cautioned that whatever technology each county selects probably will be used for at least 15 years, and it's worth taking the time to verify dependability.

"I believe we've heard pretty loud and clear they're not going to be largely confident with a barcode ballot," she said.

But the State Board isn't compelling counties to do anything, Circosta responded. They're simply approving optional equipment. He added he wouldn't endorse any of the technologies if he didn't have full confidence in them.

"I don't give a flip about the vendors and their timelines," Circosta said. "I care about one thing and one thing only: Getting this right."

The board has already agreed to decertify its direct-recording electronic, or DRE, voting machines in December. DRE devices are touch-screen machines, some of which don't produce a paper receipt voters can review. Some voting-rights activists view them as unreliable and more prone to tampering or hacking than using paper ballots.

That means 2020 will be the first time in decades when every North Carolinian will vote on a paper ballot, Circosta said in a statement released after the meeting.