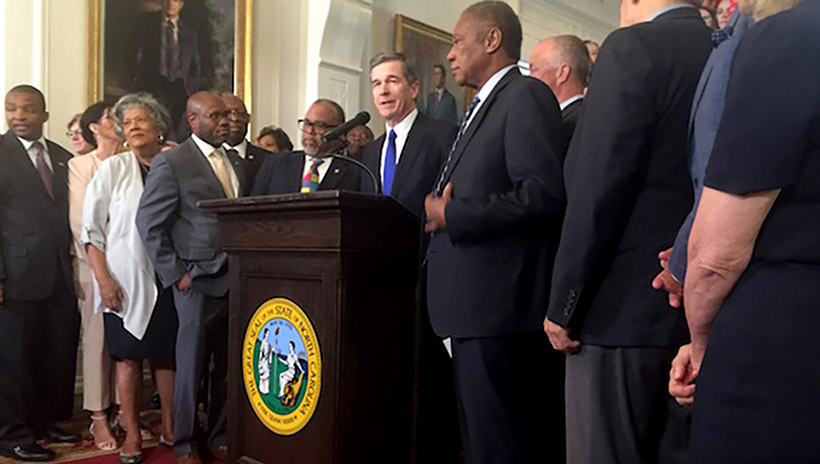 What's at stake without a budget?

It's been a long hot summer on Jones Street. Without a full budget, stand-alone bills to fund time-sensitive and broadly agreed upon spending is a piecemeal approach to funding the state's priorities, and still subject to the veto stamp.

Ending the session without a budget agreement has consequences. For fiscal conservatives like me, reverting to 2018-19 spending and saving $2.5 billion isn't a bad fallback plan.

But without the new spending plan in place, teachers won't get their sixth and seventh consecutive pay raises, state employees won't get their largest salary increase in a decade, $4 billion in capital projects won't be funded, the Department of Health and Human Services offices won't move to Granville County, Brody School of Medicine won't get its new building, teachers won't get $150 to spend on classroom supplies, and there won't be money placed back into the rainy-day fund. Some $24 billion won't be spent on key state priorities.

Despite efforts to get teachers and state employees their raises, Medicaid transformation funds in place and other stopgap measures, lack of funding is creating, among other things, real threats to public safety.

There's $91 million in the budget for school-safety measures, most of which would go toward hiring new student resource officers and mental health professionals to ensure our schools are safe places to learn and to work.

According to Attorney General Josh Stein, as of May, North Carolina has a backlog of 15,000 untested rape kits, the highest in the country. Some are decades old. There's $6 million in the budget to test rape kits, which Stein believes would eliminate the backlog. There are victims waiting for justice, survivors looking for closure, and rapists on the streets. Stein says 30-year-old sexual assault cases have been solved with recent rape kit testing. But the money to test the rest of the kits is held up in the budget.

The budget plan allocates $18.5 million in additional hurricane recovery money to help families get their lives back together, get their homes repaired, get businesses back on their feet, and get water and sewer systems, as well as roads, dependable again. There's $21 million to re-nourish the coastline and prepare for the next storm, which is coming.

The State Bureau of Investigation recently found 284,289 criminal convictions involving 145,000 people, some going back to the 1980s, were never reported to the National Instant Criminal Background Check System, the federal clearinghouse used by firearm licensees to determine whether a prospective buyer is eligible to purchase a gun. More than 230 million NICS background checks have been made, leading to more than 1.3 million denials. The SBI has connected those missing convictions with the NICS database, but no one knows who or how many convicted criminals may have mistakenly gained clearance to buy a gun. Cooper, in an Aug. 8 order, directs the SBI to identify and fix gaps in reporting criminal convictions from now on. But the money to do that is held up in the budget he vetoed.

Who would put the public safety of the state at risk? Cooper vetoed the budget and has refused to negotiate any deal failing to include Medicaid expansion. The General Assembly has offered to hold a special session to discuss the problem of climbing health-care costs, which is leaving many North Carolinians uncovered. The governor has, as of press time, refused to budge and stands by his veto.

What about an override? To reach a required 60% majority of members voting and present, some Democrats would have to join Republicans. Cooper has dug in his heels and insists legislative members of his party do the same, despite their promises when elected to represent the people of their districts.

Pursuant to our state constitution, the General Assembly is composed of 120 House districts and 50 Senate districts, each representing about the same number of people. Every district has Democrats, Republicans, unaffiliated voters, and even citizens who have chosen not to register to vote. The distribution may vary by district, but all four of those groups are represented in each. Yet some members have chosen to uphold the demands of their political party over the concerns and needs of the people of their district.

It's puzzling. Will the new pledge from candidates for elected office be, "I promise to kowtow to my political party's bosses over what's best for my constituents?" "Party first: Your interests when I'm allowed?"

We deserve representation from our legislators over blind political allegiance. We entrust them with our money and expect them to spend it well and wisely. There's too much at stake to expect less.