ECU Opener Cancelled Due to Weather 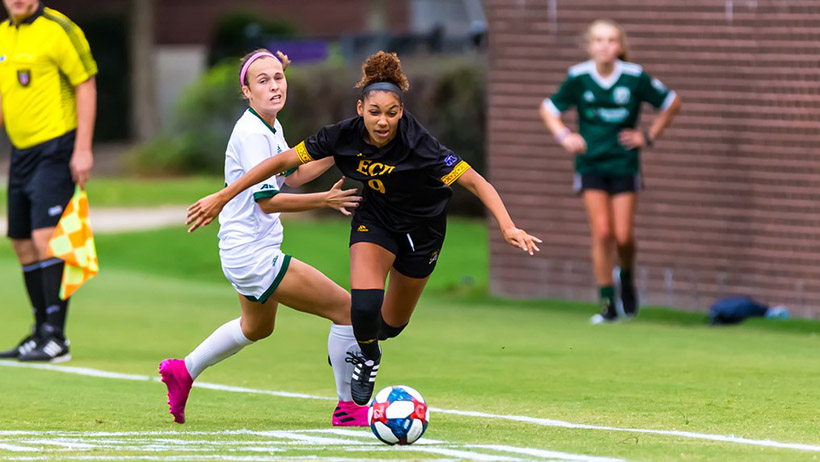 "It was tough to not be able to finish the game tonight as we thought our group was playing really well," said head coach Jason Hamilton. "We had control of the game and we broke through right before half time on a great goal from Grace (Doran) giving us even more momentum. We had a very dominant lead in every stat for the 45 minutes that we played and have to build off that going into our next game. It was great to see so many fans come out to support us and stick through the delays, we hope to see them back on Sunday."

The two teams kicked off at 7 p.m., but the weather had other plans. Less than eight minutes into the opening half, lightning sent the game into a weather delay.

After more than an hour, the two teams were able to leave the locker room and retake the field.

The Pirates were on the front foot for most of the half, holding 69% of the possession and taking eight shots to George Mason's two. The Pirates also had four corner kicks, while the Patriots had zero.

The last of those corner kicks provided some separation for ECU. With just one minute remaining in the first half, Daria Draovitch played a corner to Grace Doran at the top of the George Mason box. Doran was able to control Draovitch's cross and then loop a shot over the George Mason goalkeeper and into the goal off the underside of the crossbar, giving ECU a 1-0 lead.

Unfortunately for the Pirates, lightning prevented the teams from retaking the field for the second half, forcing the referees to call the game.

ECU will be back in action on Sunday night when the Pirates host Richmond. Kickoff is scheduled for 7 p.m., inside Johnson Stadium.