Three medical students at ECU's Brody School of Medicine have been awarded the university's most prestigious scholarship.

Brandon Garcia, Kayla Mayes and Grant O'Brien - who like their classmates are all North Carolina residents - have been chosen for the Class of 2023 Brody Scholar award, valued at approximately $115,000.

Each student will receive four years of medical school tuition, living expenses and the opportunity to design his or her own summer enrichment program that can include travel abroad. The award will also support community service projects the students may undertake while in medical school.

Since the program began in 1983, 143 students have received scholarships. About 75 percent of Brody Scholars remain in North Carolina to practice, and the majority of those stay in eastern North Carolina.

Garcia graduated from the University of North Carolina at Chapel Hill in 2017 with a bachelor's degree in biology and minor degrees in chemistry and Spanish.

While pursuing his undergraduate degree, Garcia -who hails from Browns Summit and graduated from Page High School in Greensboro - was heavily involved in community work that he hopes to build upon as a physician. He led social injustice conversations as a counselor and sub-committee co-chair of Catalyst Conference, an organization that hosts an annual event for high school students from North Carolina. He was also involved with ISLA, a Chapel Hill-based nonprofit organization offering educational programs for Latino youth and adults. 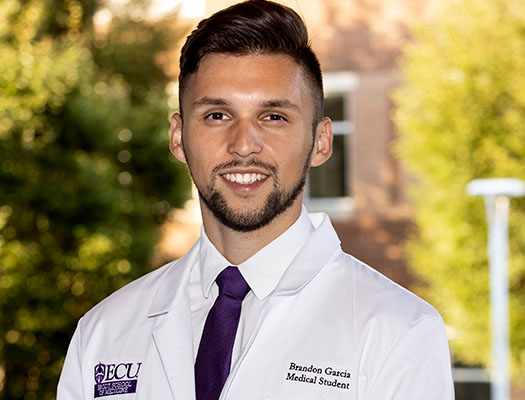 Brandon Garcia | Photos: Rhett Butler
Garcia, the son of Rose and Reinaldo Garcia, said he realized his calling to medicine following experiences with family and time he spent in Peru with Hands on Peru. The international nonprofit organization is committed to improving access to medical care and quality education for disempowered and marginalized populations in Trujillo, Peru, and its surrounding areas.

"I recognized the necessity and void of physicians for the underserved," said Garcia, adding this awareness was solidified during the two years he spent working with Piedmont Health Services through MedServe, which matches college graduates interested in careers in medicine with primary care physicians in rural and underserved areas of North Carolina.

"I was given the opportunity to witness the importance of patient-provider relationships as a medical scribe and the evolution of technology in medicine as a health informatics specialist," he added.

In addition to gaining the skills and knowledge necessary to be a great physician, Garcia said he wants to get involved in the community while in medical school to help build relationships and be able to "provide proficient and wholesome care for the patients of eastern North Carolina."

Garcia said he believes the best way to treat a community is to know a community, and he has found his love for sports to be another unique way to interact with others.

"I am beyond thankful for the Brody family for their generous donations. This opportunity will enhance my experience while in medical school because I will be able to shift my concentration to my studies while pursuing my desire to work in primary care instead of worrying about debt repayment," he said.

O'Brien graduated from Duke University in 2017 with a bachelor's degree in neuroscience.

The Concord native worked as a high school math teacher in Warren County for two years before beginning his medical education at Brody.

The son of Steve and Kathy O'Brien said he was inspired to pursue a career in medicine as a child after witnessing the impact his father, a pediatrician, had in their diverse community. 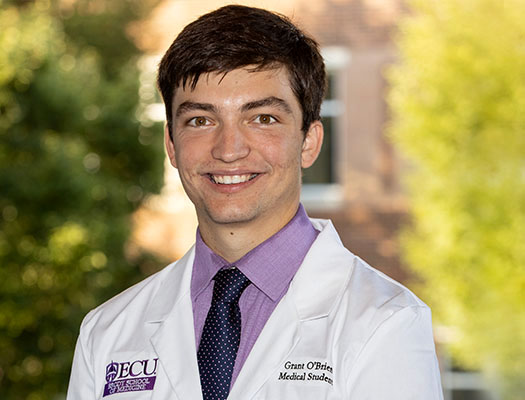 Grant O’Brien
"I loved how health care provided unique and meaningful opportunities to meet and make a difference for people of all walks of life while also satisfying my curiosity in science," O'Brien said. "I became sure that I would pursue medicine during a summer providing health outreach to migrant farmworkers in North Carolina."

While an undergraduate student, O'Brien was the co-president of Duke's ESL Tutoring Club and spent time serving as a health outreach worker to migrant farmworkers through the university's DukeEngage civic engagement program.

During his time at Brody, O'Brien said he hopes to immerse himself in the Greenville community and work with high school students who are interested in pursuing careers in medicine or science.

"I look forward to learning from the Brody professors who are doing such incredible work in providing high-quality, compassionate health care for eastern North Carolina communities," he said. He has not yet decided on a specialty, but said that he could see himself "being happy in a career in primary care in an underserved community in North Carolina."

O'Brien added that he felt "incredibly humbled and grateful" to be selected as a Brody Scholar and was inspired by the Brody Scholar physicians he met during the interview process.

"It felt like they possessed a genuine sense of purpose and motivation to make a difference in their communities, and I am excited to learn from them and follow in their footsteps," he said. "It is such a gift to have the financial freedom to choose a specialty and career path based on what matters to me without having to worry about paying off student debt. I feel very fortunate and grateful to the Brody Foundation for making this investment in me."

Mayes is a Winston-Salem native who graduated from North Carolina Agricultural and Technical State University in 2017 with a bachelor's degree in biology.

While at Brody, Mayes says she would like to serve as a liaison between the medical school and students at her alma mater and eventually "establish a standalone mentorship program to help students at historically black colleges and universities understand the importance of minorities in medicine." 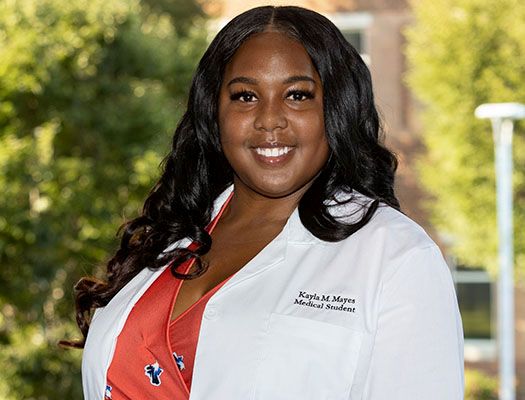 Kayla M. Mayes
Mayes interest in medicine was sparked early in her childhood due to poor health outcomes in her family, as well as by her own medical history.

"I have developed a strong interest in primary care from witnessing the burden of my family's care costs, being confided in by my patients as a nurse assistant, and observing challenges faced while developing appropriate care plans based on patient financial ability," she said.

Mayes said she hopes to utilize her platform as a physician to advocate for her patients, act as a servant leader in her community and mentor aspiring future physicians.

"I aspire to design innovative methods to improve patient compliance and increase engagement in their care plan," she said. "I will use clinical knowledge to aid in the reformation of health care policies to ensure patients have access to equitable health care regardless of their background."

Mayes said that being a Brody Scholar means more to her than being the face of an institution or having a scholarship.

"I am grateful to the Brody Family for the ability to attend Brody without the significant financial burden that comes with medical school, and I firmly believe to whom much is given, much is required," she said. "As a Brody Scholar, I plan to use this gift to pay it forward to those who will come after me and the community I will serve now as a medical student and later as a physician."