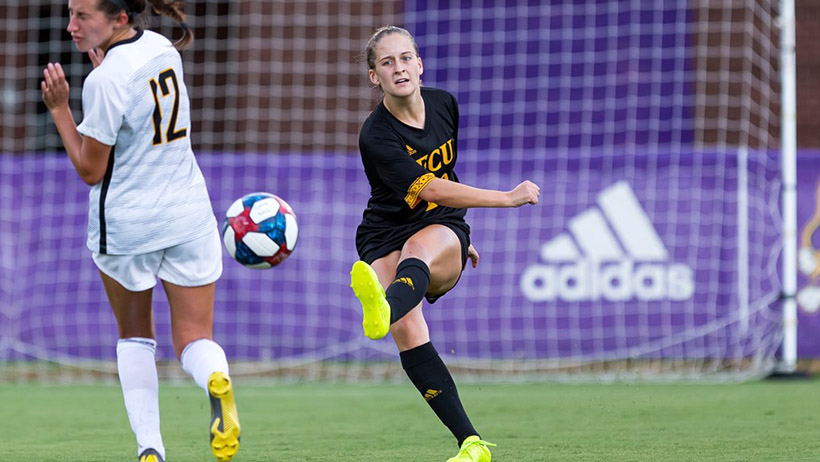 
GREENVILLE, N.C.     After finishing the preseason with an exhibition victory, the ECU women's soccer team will get the season underway on Thursday evening when the Pirates host George Mason.

ECU will have high expectations this season after a 10-6-3 record in 2018 as well as a spot in the American Championship Semifinals. The Pirates were picked to finish fifth in the conference's preseason poll with Jayda Hylton-Pelaia being chosen as the league's Preseason Defensive Player of the Year. ECU has one tune-up match under its belt, having topped VCU 1-0 in an exhibition. 2018 leading scorer Jenna Dages grabbed the scrimmage's only goal, scoring a header off a corner kick by Erin Mikalsen.

ECU is just 3-8-0 all-time against George Mason, although the Pirates have a 2-2-0 home record against the Patriots. The two teams have met just three times since ECU left the CAA following the 2000 season, with ECU winning in both 2014 and 2015 while George Mason won 2-1 last season. Dages opened the scoring in that loss, but the Patriots answered just seven minutes later and then scored the winner in the 57th minute.

Thursday night will be the first time since the 2017 campaign that ECU has opened the season with a home game. In season openers, the Pirates are 11-13-1 all-time in their history while they are 17-8 in home openers, including a 5-1 triumph over Radford last season.

Kickoff is scheduled for 7 p.m., on Thursday night inside Johnson Stadium. Admission is free for all fans. Those who cannot make it to Johnson Stadium can watch the live stream HERE or follow the live stats HERE.