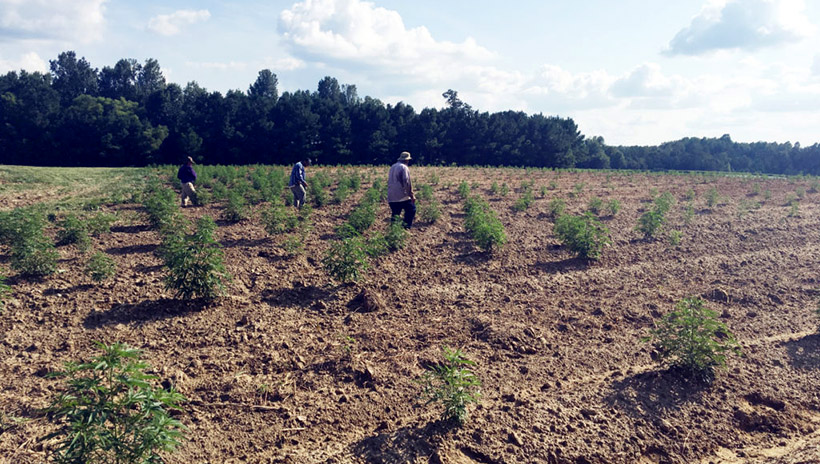 Field laborers search for and tag hemp plants that exhibit both make and female traits, to ensure they don’t pollinate the rest of the field. | Photo: Brooke Conrad/Carolina Journal

Meanwhile, a new statewide poll shows voters wish the government would stay out of the weeds.

A new version of Senate Bill 315, North Carolina Farm Act of 2019, passed the North Carolina House Rules Committee Tuesday, Aug. 20. The latest version of the omnibus bill would outlaw smokable hemp May 1, 2020. It's an unwelcome compromise for hemp farmers and hemp consumers alike.

Hemp, a non-psychoactive member of the cannabis family, is low in THC and won't get you high. Instead, the plant is rich in cannabinoids - compounds used to treat seizures, pain, and anxiety. In 2018, the federal government removed hemp from its list of controlled substances. The declassification opened a gaping, gray area between state and federal law.

With CBD stores popping up around the state, the popularity of edible, drinkable, and smokable hemp is spiking, a new survey from the Democratic firm Public Policy Polling shows. Of the 508 North Carolinians surveyed, 70% believed they should have the right to buy or use CBD products, and 66% believed the government shouldn't dictate what types of CBD products are acceptable. Only 22% thought hemp should be considered a gateway drug.

S.B. 315 was supposed to help clarify the law for hemp buyers and growers in North Carolina, but arguments over smokable hemp added to the haze.

State legislators for months have quarreled about expanding North Carolina's hemp pilot program into a statewide farming industry. The Senate in June passed S.B. 315 under the guidance of Sen. Brent Jackson, R-Sampson. The bill has since flip-flopped through House committees, shepherded by Rep. Jimmy Dixon, R-Duplin.

Dixon and Jackson clash over what to do about smokable hemp.

Law enforcers can't tell the difference between hemp and marijuana, argues Dixon, the N.C. State Bureau of Investigation, the N.C. Sheriffs' Association, and the N.C. Conference of District Attorneys. The original version of S.B. 315 would've banned smokable hemp by Dec. 1, 2019, but - after listening to concerned farmers - Jackson changed the date to Dec. 1, 2020.

Give the farmers and law enforcers time to work out a solution, he said.

"The longer we go without an official ban on smokable hemp, the more jeopardy we are in," he said Aug. 20 before the House committee. Law officers would like to see the date returned to Dec. 1, 2019.

The legislature should also set age limits on who can buy hemp products, Dixon said.

Most CBD retailers already check to make sure buyers are 18 or older, Jackson responded.

"I'm not going to overdramatically explain anything else," he commented to Dixon.

Last month, Dixon threw a curve at Jackson, attempting to ban smokable hemp via an amendment to the N.C. Controlled Substances Act. That legislation, Senate Bill 352, still sits in the House Rules Committee, its future uncertain now that lawmakers have chosen to address the hemp ban within the farm bill.

Even if the legislature manages to pass hemp regulations as part of S.B. 315, "This is a legal question that I think will be played out in the courtroom," Dixon said.

North Carolina isn't the only state facing legal challenges over hemp. In July, a group of Indiana CBD retailers sued the state over its smokable hemp ban.

"This is my life," Michael Sims, the founder of Charlotte CBD, a hemp dispensary, told the committee. "Why are we fighting this? We are doing nothing but hurting the industry. We're smarter than this."