In a defensive struggle, the ECU women's soccer team scored the only goal of the game to top VCU 1-0 in an exhibition on Friday night inside Johnson Stadium. east carolina university, ECU, women's soccer, VCU, exhibition, august 19, 2019
Home
Categories
Login 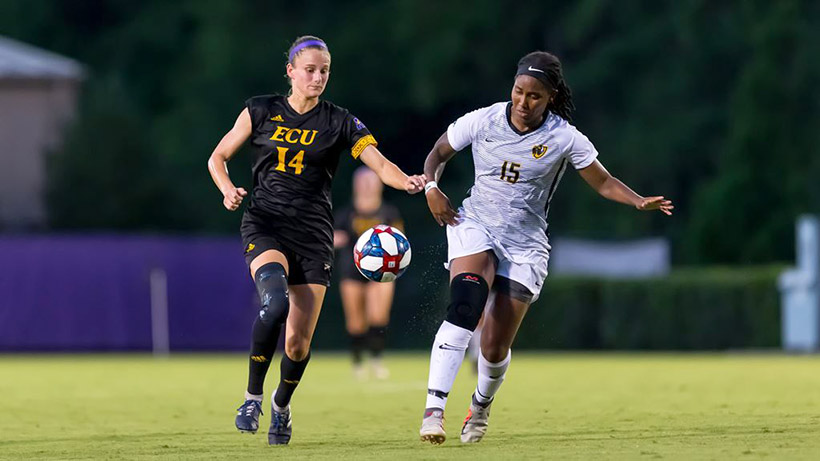 GREENVILLE, N.C.     In a defensive struggle, the ECU women's soccer team scored the only goal of the game to top VCU 1-0 in an exhibition on Friday night inside Johnson Stadium.

"First game against an opponent and we were very excited to get out and play against someone else for the first time this year," said head coach Jason Hamilton. "We knew VCU was going to be a very talented group, they've been a very successful program the past few years. They're tough to play against."

With the match slated as a preseason exhibition, the two teams played three 30-minute periods instead of the normal 45-minute halves.

In the opening 30 minutes, neither team could get anything going on the offensive end. VCU took four shots to ECU's one, but none of the five shots were on target.

The middle period saw the offenses begin to come alive. ECU had the first great chance of the game when Kim Sanford got on the end of a corner kick, but her headed effort bounced off the top of the crossbar.

The game's lone breakthrough came off another ECU corner kick. With Erin Mikalsen swinging in a cross, Jenna Dages rose up and lofted a header over the VCU goalkeeper and into the top corner.

"Set-pieces are something that we know we have to win that battle each and every game," Hamilton said. "We talked about not giving them anything off any dead ball situation and then if we can score off it, that's just a bonus and that's exactly what happened today. Erin served a great ball and Jenna climbed up there and put the ball into the back of the goal."

Dages' goal came at the 45:34 mark, nearly 15 minutes of the second period and the final 30 minute frame left to play. However, the ECU defense stood tall and did not allow the Rams to tie the score. Meaghan Haley, the sophomore goalkeeper from LIU Brooklyn was a large part of that defensive effort, making two stops in quick succession to end the second period followed by two saves in the final five minutes of the third stanza to close out the shutout.

"We tried a lot of things today and played a lot of players," added Hamilton. "We used all 23 healthy players, which is great to get that experience against a great team. Now we need to go back and look at film and get a plan for next week. We've got some areas we know we've got to work on just from watching it live. But we'll take a look at that video and see some things we did well that we can build off of and some things we need improve on."

The official start to the season comes on Thursday, Aug. 22 when the Pirates host George Mason inside Johnson Stadium. Kickoff for that contest is slated for 7 p.m.