Thursday's results were the exact opposite of Wednesday's as the ebb and flow of pre-season camp continued for the East Carolina Pirates. east carolina university, ECU, football, defense, august 15, 2019
Home
Categories
Login

Seize the Day: Defense Bounces Back 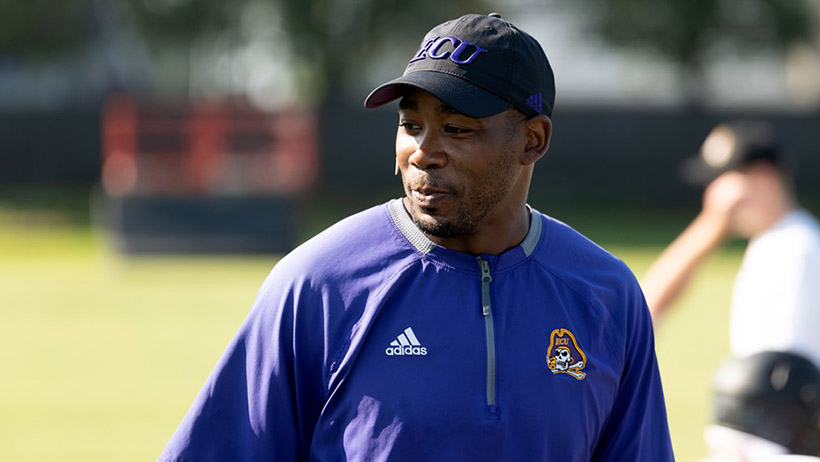 GREENVILLE, N.C.     Thursday's results were the exact opposite of Wednesday's as the ebb and flow of pre-season camp continued for the East Carolina Pirates.

Pirate defenders slept on it, then responded aggressively according to Houston.

"I thought the defense came out very energized today and looked completely different than they did yesterday," Houston said. "The defense was as energetic, physical and as locked in as we have been all pre-season today after seeing the same thing from the offense yesterday. The secondary in particular was much more aggressive and communicated better during the early drills and carried it over into the team segments."

As the team aims toward its August 31 opener against NC State in Raleigh, the challenge is for both units to perform well at the same time.

"I hope to see that from both sides Saturday when they really challenge each other," Houston said. "I told them today that just because I pat them on the back and tell them good job, it doesn't mean they can relax. It means they have to push themselves to get better the next day.

"We are going to see a quality opponent every single Saturday. We don't want a team that plays great one week, then dips the next. We want to be a consistent team that plays with the same intensity, physicality and energy no matter who we're playing against. That's the mark of a solid program."

Saturday will be the next chance for both sides to show improvement as the squad will wrap up pre-season camp with the second scrimmage in Dowdy-Ficklen Stadium. This one will bear a closer resemblance to a regular season contest, according to Houston.

"We want to see a physical, up-tempo scrimmage," Houston said. "It will be like a real game as much as we can make it with coaches up in the press box and on the sideline, special teams, play clock, officials, the whole deal. It will be a big evaluation day for everybody."

The cornerbacks will be among those under the microscope Saturday. Five freshmen join seniors Colby Gore and Mike Witherspoon in the secondary, making them the youngest Pirates unit. Rookies Ja'Quan McMillian, Juan Powell and Damel Hickman earned a place on the pre-season depth chart prior to the start of drills.

"Being young hasn't held them back," position coach Brandon Lynch said. "They play with edge and a sense of urgency to serve our team. They bring great passion and intensity every day. All are athletic, quick, love to compete and have an edge getting to the ball.

"Colby and Mike are the vets and have a sense of urgency," Lynch said. "Coach Trott says we want to play defense with a nasty attitude with an urgent mindset. Those guys have helped the younger ones learn to do that."

Lynch is the only holdover from the previous coaching staff, having spent the past two seasons at ECU. His relationship with Houston goes back to Lenoir-Rhyne after a professional career that saw him earn a Super Bowl ring with the Indianapolis Colts and a Grey Cup bauble with the Saskatchewan Roughriders.

"I learned from some great mentors, including Tony Dungy and Jeff Fisher," Lynch said. "However, they had the exact same message that Coach Houston and Coach Trott speak. It's the team first, then each player has to do his job urgently with a nasty attitude to make the team better. Every drill that we do every day out here has that message behind it."

Friday's practice will be the last pre-season camp workout at the Cliff Moore Complex. The Pirates will follow Saturday's scrimmage at the stadium by beginning their in-season late afternoon schedule early next week.

"I think our guys have responded better than I thought," Houston said. "Going through the winter and spring, I didn't know how they would handle a demanding pre-season camp. It hasn't been easy, but the kids have been coachable, they want to do well and understand what we have to do. We've had positive meetings at night and they show up in the morning ready to go."

PRESEASON CAMP NOTEBOOK     Houston also addressed ECU's current success in the 2020 recruiting process following Thursday's practice - "I think it speaks to what ECU is. We are getting our 1,2 and 3 at almost every position. We are getting the best kids who we think fit East Carolina University. That speaks to what a great place we have. There is no excuse to not be able to recruit at a high level here. Kids and parents visit campus and love everything the university has to offer outside of athletics. We are excited about the 2020 class and hope to have it complete in September."