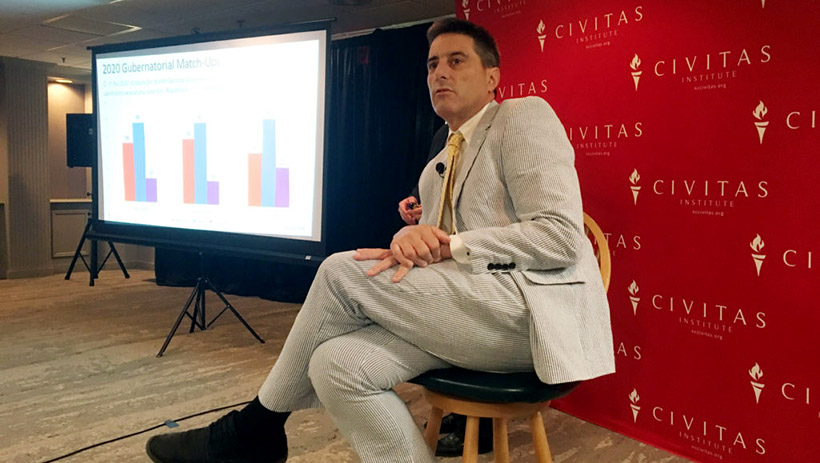 The result is one of several North Carolina election-related questions Civitas released Wednesday, Aug. 14. They suggest Republican President Trump has an edge over four of the top Democratic presidential contenders in the 2020 campaign. They also show a significant number of voters would support both Trump and Democrat Cooper next year, and that the majority of respondents favor private health insurance, while a growing number oppose socialism.

"You take all this polling, and we are not drastically headed, as of today, I don't think, for a very different election than we had in 2016," said Dallas Woodhouse, who served as North Carolina Republican Party executive director until earlier this year and spoke Wednesday at a Civitas Institute presentation.

Democrats are also about twice as likely to vote for Trump's re-election than Republicans are to vote for any of the four Democrats, the poll showed.

Meantime, a considerable number of Trump voters in North Carolina - between 8.5% and 12.5% - indicated they'd also vote for Cooper.

"Watch the Cooper-Trump voters," said Donald Bryson, president and chief executive officer of Civitas. "That is a significant portion of the electorate."

When poll respondents were told Medicaid expansion could cost $340 million a year and that the majority of recipients would be healthy, working-age adults with no children, 50% and 47% of respondents respectively said they'd be less likely to support it.

"Are you for ice cream, free beer, and a three-day work week? Yeah." Woodhouse said. "But what does it cost you?"

Woodhouse also noted that people generally don't know the difference between Medicare, which is health insurance for the elderly, and Medicaid, which is targeted at low-income and disabled individuals ages 19-64.

Another question showed North Carolinians largely favor private insurance over other coverage alternatives. If given a choice and price were not an issue, 53% would pick coverage from private insurers such as Blue Cross Blue Shield, 22% would choose Medicare, 8% Medicaid, 9% other options, and 9% were unsure.

Support of socialism is also on the decline. In the most recent poll, 55% said they strongly oppose it, compared with 60% in a February poll.

"North Carolina is a huge microcosm of the whole country," he said.

The poll, conducted Aug. 1-4 by Harper Polling, used live callers and surveyed likely voters reached by landlines and mobile phones. The margin of error was plus-or-minus 4.38%.