For the ECU women's soccer team, the biggest boots to fill will come on the forward line, as the Pirates will have to replace Courtney Cash, who graduated in the top-10 all-time at ECU in career points. east carolina university, ECU, women's soccer, jenna dages, august 13, 2019
Home
Categories
Login 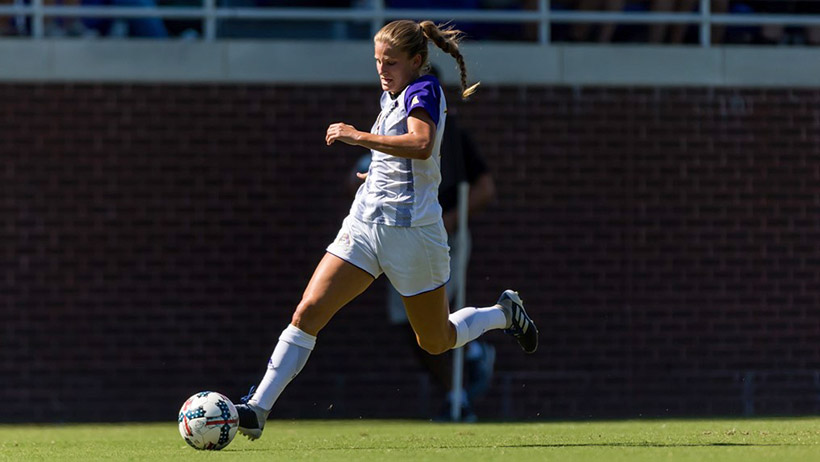 GREENVILLE, N.C.     For the ECU women's soccer team, the biggest boots to fill will come on the forward line, as the Pirates will have to replace Courtney Cash, who graduated in the top-10 all-time at ECU in career points.

"Cashlin who missed a lot of time last year with injuries, is in full form coming in to preseason," said head coach Jason Hamilton. "You can just see the difference in her from last year. She is healthy, fit, and confident which is exactly what you want from a forward."

The leading returning scorer for ECU is Jenna Dages. Dages scored six goals and added an assist in her first season in Greenville, with three of those goals standing as game-winners. The Louisiana Tech transfer also scored the fifth and final penalty kick as ECU advanced past SMU in the AAC Championship First Round. Dages was named to both the AAC Weekly Honor Roll and the Top Drawer Soccer Team of the Week as an honorable mention on Sept. 4.

"Jenna had a great year for us and is getting back in to form after having surgery in early spring," commented Hamilton. "With it being her last season, we are expecting her to come out every day and give it everything. She has the ability to score in so many different ways and that is what makes her dangerous."

Tori Riggs spent time last season on the wings for ECU, but she was still able to contribute three goals and two assists. Riggs scored the game-winning goal against both Charlotte and Richmond, joining Dages and Copley as the only Pirates with multiple game-winners. Riggs provided assists against Houston and on Dages' game-winning goal at UCF.

"Our plan for Tori is to move her closer to goal this season, and hopefully get her more chances in front of the goal," Hamilton said. "She played wide for us most of last season and will see time there again this year. Tori has good pace to get in behind as well as the ability to hold the ball up."

Daria Draovitch led ECU with five assists to go with two goals during the 2018 season. Draovitch was an important option off the bench for ECU, starting just two games. Her best stretch came in conference play, when she had an assist against Memphis, followed by scoring in consecutive games against Houston and SMU, helping her earn a spot on the AAC Weekly Honor Roll.

"Someone who will see time up top, out wide, and even in the backline, Daria is another player that has made huge strides in the last year and a half," commented Hamilton. "Daria has the ability to whip a good ball in, a very good range of pass, and good pace."

Kat Gonzalez provided a steady forward option off the bench during her freshman campaign. She scored her first collegiate goal on an individual effort against Radford while also providing assists against SMU and Connecticut. She remained calm and buried her spot kick when ECU advanced past SMU in the conference tournament.

"Kat is a very naturally talented soccer player and a goal scorer with a creative mind in the final third," Hamilton added. "She didn't adjust to the college game as quickly as we would have like to see, so we are hoping that the summer training has helped her to be more prepared for 2019."

Lauren Hollis came to ECU as a defensive player and she played five games there during the 2018 season. However, she made the move higher up the field during the spring and will contribute to the forward group during 2019.

"A converted center back, Lauren saw minutes as a forward for us this past spring," Hamilton said. "She has the size to be a good target forward who can hold the ball up for us and get on the end of crosses once she figures the position out."

The first newcomer among the forwards is Leesburg, Va., native Taylor Kibble. Kibble was the Virginia Player of the Year during her junior season, scoring more than 50 goals as she helped lead Loudoun County to the state championship.

"Taylor had an unfortunate injury early this spring that may potentially sideline her for the majority of the season," said Hamilton. "Taylor has the ability to score a lot of goals, and we are excited to get her back in a few months."

Also arriving in Greenville for her first collegiate season is Mackenzee Blaser. Blaser is coming off a season at Newport Harbor High School where she helped her team finish as the undefeated league champions. Blaser also helped lead Slammers FC to a pair of Florida State Championships.

"Mackenzee is another freshman who's physically ready for the college game," Hamilton said. "She has good pace and a strong frame. She has the ability to play up top centrally or as a wide player."