Week 2 - Back to Work for ECU | Beaufort County Now 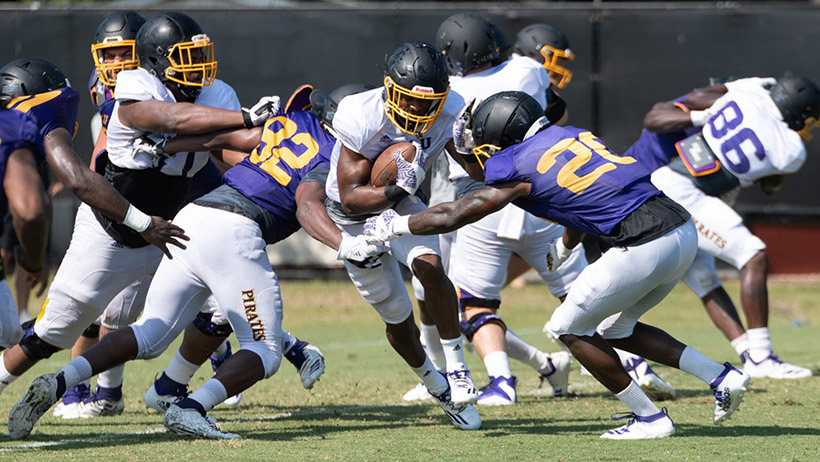 "There were some obvious things that we saw on film that we need to address this week," coach Mike Houston said. "I challenged our coaches a little bit on some things we needed to do better as a staff this week and I thought they did an excellent job in practice today. It was a solid day overall."

The scrimmage was the first chance for the coaches to evaluate how the players executed what they had been taught on the practice field during the first week of camp, so after a thorough film review, Monday was a day to reflect while building on the results and future.

"I thought our first two offensive drives were really good," Houston said. "Our top two quarterbacks (Holton Ahlers, Reid Herring) did not turn the ball over, which was a huge plus. Usually in a first scrimmage you have dropped passes, turnovers and penalties, but we played a pretty clean game with our first and second team offenses.

There's a lot of competition between those two guys and both have managed the offense well. We anticipate that somebody will rise above and be the guy come August 31st. Our defense responded well later, so we talked about needing to start better. We have to maintain our momentum and intensity throughout and we addressed that today. We'll build on the things we saw Saturday the rest of this week."

Houston has repeatedly emphasized the process of transforming the Pirates into a tougher squad, capable of overcoming fatigue and other obstacles. Monday presented another opportunity to drive the point home.

"I told them after practice that our actions have to reflect our words," Houston said. "If we say we are going to be a certain kind of team, then our actions on the field have to reflect that. That will be a big point of emphasis for film this afternoon."

Monday began the last week of preseason camp with the final scrimmage coming up Saturday. Classes start August 19th and practice will shift to the afternoon as the focus turns to preparing for the season-opener at NC State.

"We need to play with urgency, be physical and play with an edge," Houston said. "We need to consistently execute on both sides of the ball for an entire practice or scrimmage. I've been pleased with our attitude, effort and being coachable. We are making progress every day, but we have a long way to go before the opener."

The running game falls into the above assessment. Houston, offensive coordinator Donnie Kirkpatrick and position coach De'Rail Sims led a unit at James Madison that averaged 219 yards a game the past three years while racking up 37 victories, a national championship and a pair of title game appearances.

"We build the offense around the running game," Sims said. "Running the ball is crucial for us because it sets up everything that we want to do. We want it to be a strong point on this team."

They spend the majority of the time repeating various footwork drills over and over. Attention to detail is part of the coaching staff's attempt to build a new culture around the team.

"The eyes always tell the feet where to go, so we emphasize that in every drill," Sims said, who joined Houston's staff at JMU in 2016.

"The big plays will happen if we take care of our footwork and make sure our hips and shoulders are aligned," Sims continued. "A running back is always getting knocked onto one foot (in a game) so we drill on how to bounce back to both feet quickly. Once they regain balance, we work on explosion and acceleration straight ahead with pads low for a low center of gravity. It's lots of reps every day designed to help us on Saturdays."

Sims is familiar with coaching new players, having made stops at the University of Pikeville (Ky.), Carson-Newman (Tenn.) and Western Carolina before joining most of the current Pirate staff in Greenville. He says the faces change but the coaching method doesn't.

"They tend to rise to the temperature of the thermostat," Sims said. "I set the tempo and they rise to it. It's the same with this group. They've done a very good job of meeting my standards and expectations."