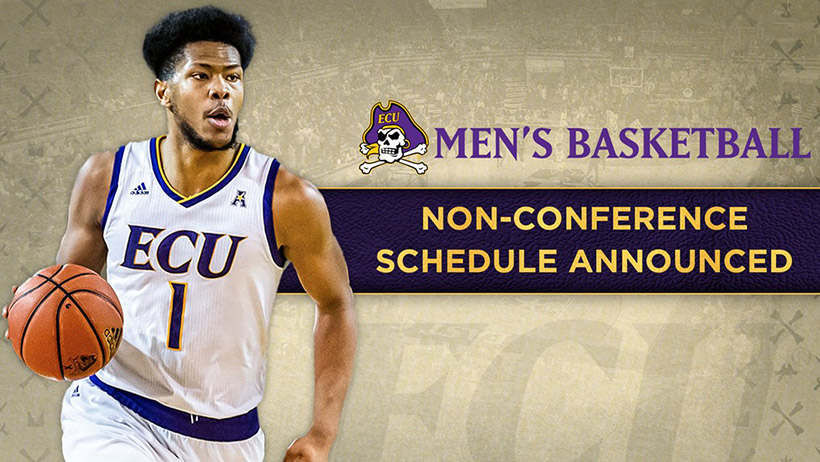 GREENVILLE, N.C.     A game against Navy in the prestigious Veteran's Classic and a trip to Nassau to compete in the Islands of the Bahamas Showcase highlight the 2019-20 East Carolina men's basketball non-conference schedule released Tuesday. In addition, ECU will play seven home games inside Williams Arena at Minges Coliseum.

The Pirates' American Athletic Conference schedule has not been finalized and will be announced at a later date along with tipoff times and the complete television slate.

ECU opens the regular season at home against VMI on Tuesday, Nov. 5. The Pirates then head to Annapolis, Md., to face Navy on Friday, Nov. 8 in the sixth annual Veteran's Classic. It'll be the first meeting between ECU and Navy since both were members of the Colonial Athletic Association in 1991. The Pirates and Mids will square off at 8:30 p.m. preceded by Auburn versus Davidson at 6 p.m. ET.

A trip to Boone to face Appalachian State follows on Tuesday, Nov. 12 before returning home to take on 2019 ASUN champion Liberty, who reached the second round of the NCAA Tournament last season, during the mainland portion of the Island of the Bahamas Showcase on Saturday, Nov. 16.

The bracketed segment of the Islands of the Bahamas Showcase runs Nov. 22-24 and will be played at the Kendal Isaacs National Gymnasium with ECU playing one game each day.

The Pirates will open the three-day event against Evansville on Friday, Nov. 22 at 8 p.m. ET and face either George Washington or Missouri - Kansas City (UMKC) on Saturday, Nov. 23, while Liberty, Milwaukee, Morgan State and Rice are on the other side of the bracket and will match up with the ECU on Sunday, Nov. 24.

The Pirates open their five-game home stand against Coppin State on Tuesday, Dec. 3. An 11-day break ensues for final exams before the Pirates return to the court hosting Campbell on Saturday, Nov. 14. The pre-Christmas slate wraps up with games versus Maryland-Eastern Shore (Dec. 17) and Charlotte (Dec. 22).

A first-ever meeting with Eastern Kentucky on Saturday, Dec. 28 closes the non-conference portion of the 2019-20 schedule.