This year's class was selected from a competitive field of 1,075 applicants - a record amount for the 42-year-old medical school.

In front of their families, friends and loved ones, the students were individually presented with the white coats they will wear in patient care areas throughout their time at ECU.

"With this cloaking, we welcome you into a community in which you will accept the obligations inherent in the practice of medicine: to be excellent in science, to be compassionate and to lead lives of 'uprightness and honor,'" Dr. Mark Stacy, dean of Brody and vice chancellor for ECU Health Sciences, told the students during the ceremony.

The students hail from a total of 26 North Carolina counties - from Buncombe in the west to Pasquotank and Carteret counties in the east - and 24 different undergraduate institutions.

Forty-five percent of the Class of 2023 are minority students and 30 percent are from minority groups - African-American, Native American and Hispanic or Latino - that the Association of American Medical Colleges considers "underrepresented in medicine." The class is 51 percent female and ranges in age from 20 to 44.

While the students have already excelled in many areas in order to earn their white coats, Dr. Claudia Daly, clinical assistant professor in ECU's Department of Emergency Medicine and president of the school's Alumni Society, provided them a glimpse of the endless possibilities that still lie ahead by sharing several examples of nationally recognized achievements of Brody alumni.

"While our country is amazed by the outstanding things we have accomplished, we know that we are the fabric of eastern North Carolina and the model for how to provide care through kindness, compassion, respect and resiliency. For all that is what matters to our patients," Daly said. "We are the doctors who practiced all week, are on call and work at the Greenville Community Shelter for free on weekends. We navigate complex situations in order to provide care for our patients who have limited or no resources.

"We care about the little things," she added. "And we accept the challenge that North Carolina needs us right here." 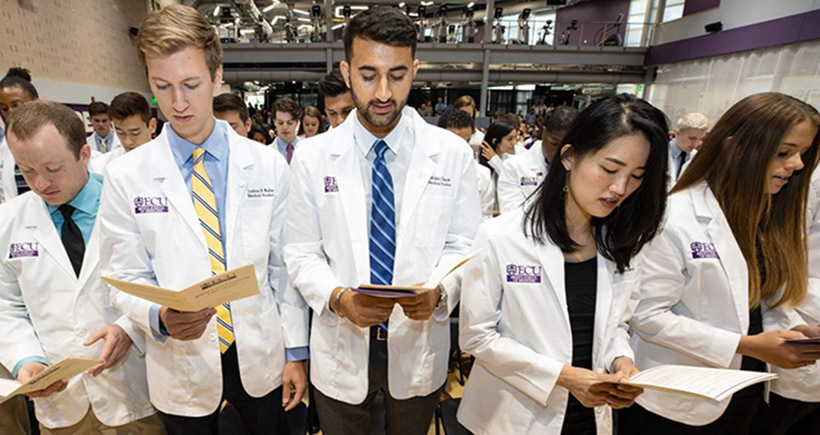 Greenville native Ghita Harris wanted to become a physician from an early age and spent two summers during high school working on medical research projects at Brody alongside ECU faculty. But when she did not initially get into medical school out of college, she elected to go to law school instead and spent eight years as a criminal defense attorney.

When her mother, Fannie, became seriously ill following a kidney transplant in 2015, Harris said it provided her the inspiration she needed to follow her heart. She closed her law practice and began retaking the prerequisite courses she needed in order to apply to medical school again. 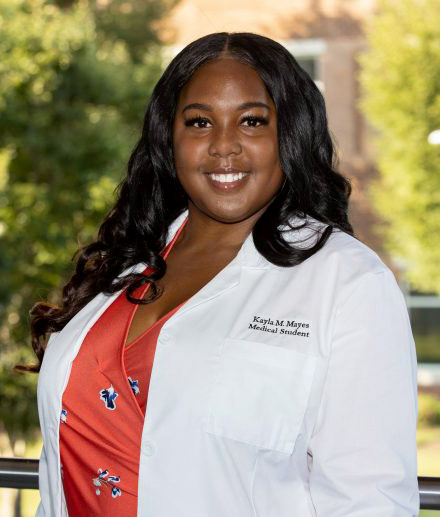 2019 Brody Scholar Kayla Mayes
On Friday morning, while proudly wearing her white coat, she reflected on her journey, honored her late mother and again took aim at her future.

"It's surreal to be fulfilling my dream. To have come totally full circle - from being here in high school and to be back here now - is unbelievable," Harris said after the ceremony. "Now I just want to make Brody proud for giving me this opportunity."

Kayla Mayes grew up in a two-bedroom house in Winston-Salem with her parents and three siblings. She remembers when the family could not afford furniture other than a mattress to sleep on. She remembers the empty refrigerator and her parents struggling to keep the power on.

On Friday, Mayes was one of three Brody Scholars to be presented a white coat. The Brody Scholar award is ECU's most prestigious scholarship and provides each recipient with four years of medical school tuition, living expenses and the opportunity to design his or her own summer enrichment program that can include travel abroad.

"It's not often that you find someone from my background able to not only graduate high school, but to go even further to graduate college with a four-year degree. And to be accepted into a medical school and then to be able to compete with great candidates (for the Brody scholarship) is truly an amazing opportunity for me," Mayes said.

"Coming from my background, my parents really ingrained in me the value of a dollar. So receiving full tuition was definitely huge for me," Mayes said. "By being able to have more flexibility with my income after I become a physician - because of this scholarship and not having to pay back student loans - I'll be able to pour more of those resources, and more of my focus, into other peoples' lives and paying it forward."

Many of the 86 new medical students are "non-traditional" students, who previously worked in other careers before deciding to pursue medical school.

Charlotte resident Andres Gil, who was born and raised in Columbia, graduated with a bachelor's degree in violin performance from Winthrop University.

To make ends meet while pursuing a career as a violinist, Gil took a job as a medical interpreter.

"After two years working in the pediatric emergency department as an interpreter, I fell in love with medicine and decided to go back to school to take the prerequisites I needed," Gil said. "Being able to put the white coat on today is the transition of one part of my life to another and signifies a culmination of five years of hard work." 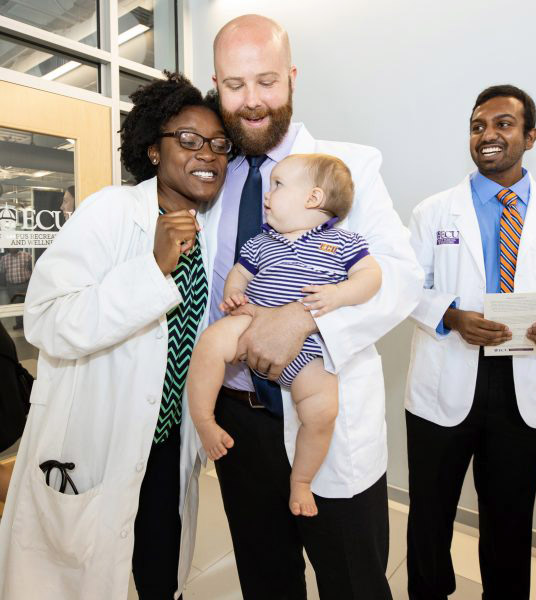 Ben Wise is congratulated by a friend while holding his daughter, Alice, after Brody’s annual White Coat Ceremony.
Gil said his prior hospital experience already has him interested in practicing either pediatrics or emergency medicine.

"Emergency departments have unfortunately become an urgent primary care for a lot of people," he said. "It's a place where they go and within five minutes have to divulge their most intimate secrets. And they trust you to take that information and enrich their lives in some way."

Durham native Ben Wise received undergraduate degrees in philosophy and economics from The College of William & Mary and then worked as an economic consultant in Washington, D.C. for five years.

After receiving a master's degree in applied economics, he worked for three years as a civilian contractor in Afghanistan doing military intelligence work.

While in Afghanistan, a sick goat set Wise on a path toward medical school.

The goat was suffering from bloat and Wise was told it was going to die.

"I was like, 'We just can't let him die,'" he said. "So we Googled what to do with it and about the sixth result said to pour cooking oil down its throat. So we massaged cooking oil down a goat's throat and we saved it."

Upon returning to the United States, Wise went to work in a veterinary clinic but quickly realized it was not the right fit for him. After subsequently volunteering at Duke Regional Hospital in Durham, he knew becoming a physician was his calling.

"It's crazy that a goat turned into medical school for me, but here I am,'" Wise said through laughter.

After the ceremony, Wise was greeted by his wife, Christine, and 10-month-old daughter, Alice.

"This is probably one of the proudest days of my life. It feels like the capstone on top of a long, long process," he said, happily holding Alice in his arms. "And getting into Brody, a place that is all about service, there is no better fit for me.