East Carolina trotted out the front doors of the Ward Sports Medicine Building on Saturday morning, passed the Pirate statue and entered through the Dowdy-Ficklen Stadium gates for its first full-fledged game simulation since the Purple-Gold matchup back in the spring. east carolina university, ECU, football, scrimmage game, august 12, 2019
Home
Categories
Login 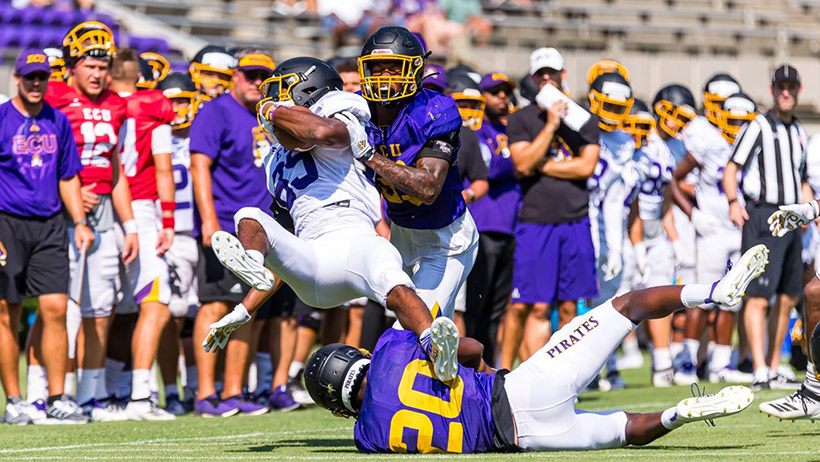 GREENVILLE, N.C.     After toiling for over a week in the practice complex, East Carolina trotted out the front doors of the Ward Sports Medicine Building on Saturday morning, passed the Pirate statue and entered through the Dowdy-Ficklen Stadium gates for its first full-fledged game simulation since the Purple-Gold matchup back in the spring.

"It was a perfect setting today," first-year ECU Head Coach Mike Houston said. "The turf was immaculate, we have the Towne Bank Tower completed, great weather with a nice breeze out here - just a great day for a scrimmage."

While an American Athletic Conference officials crew oversaw the action on the field, Houston and his staff meticulously scripted how the scrimmage would run, focusing on plays they needed to see live and which personnel would execute them.

"I told the players that this is the most valuable film (to evaluate) we have so far in camp," Houston said. "Coaches aren't out on the field like they have been in practice so you have to operate on your own. It's really the first time they've had to go out and operate like a football team. As the head coach, I'm happy and mad. Happy about the good things I saw and mad about the mistakes we made."

The top four offensive and defensive units competed against each other in a variety of situations, including field positions at the 25 after a kickoff, the one-yard line to simulate a full 'coming out' drive and extensive red zone work. The best result from a scrimmage is often a mixed one, meaning both sides had some highlights.

"Offensively we saw some guys who we hoped could make plays do so," Houston said. "Alex Turner stood out on defense with his leadership, toughness and intensity. We had very few penalties, which is great this early in the year.

"Negatively, I didn't like our sense of urgency at times on both sides of the ball. I also didn't like our lack of intensity at times. We have to be able to sustain intensity throughout. If it's going your way, ride the wave. If not, battle to get momentum back on your side."

Sophomore inside linebacker Xavier Smith led the defense with 10 tackles, while the unit combined for 12 tackles for loss and an interception. Turner, a senior tackle, contributed three stops, a quarterback hurry and lots of leadership.

"You just have to stay positive and bring other guys with you," Turner said. "You can't turn negative when something bad happens. I've seen our football intelligence increase dramatically and everyone is working really hard. We have to celebrate the positives and pull guys along to keep playing at a high level."

Quarterbacks Holton Ahlers and Reid Herring rotated snaps with the first and second units. Ahlers was the day's leading rusher with 113 yards and three touchdowns on just six carries, while Herring passed for a team-best 165 yards with a touchdown during his 12-of-23 performance.

The two combined for 307 passing yards on 26 completions (45 attempts) with three scores and no interceptions as the competition for the starting job continues.

"We are competing, but we are also working together," Herring said. "We are in the same (dorm) suite during camp and it's all been positive between us. We push each other every day."

Herring hit redshirt freshman Tyler Snead with a 24-yard scoring pass early in the action, while Ahlers broke off TD runs of 56 and 17 yards that confirmed his return from an injury late last season.

"Every day with Big John (Williams, ECU's strength and conditioning coach) has helped me," Ahlers said. "His off-season speed, agility and strength program has been really good. I feel faster because of it."

Ahlers agreed with Herring regarding the quarterback duel.

"He's a great guy," said Ahlers. "We push each other to get better. We talk all the time about coverages and plays. It's been good for both of us. We just want to win and bring these fans back to fill up the stadium. I grew up here coming to games when it was sold out all the time. The reason I came here was to bring that back."

Houston also lauded the efforts of specialists Jake Verity and Jonn Young during the action. Verity converted all four point-after attempts and drilled field goals from 26 and 41 yards out. Young averaged nearly 40 yards per punt in five boots, burying two inside the 10.