Like the defense, the midfield for the ECU women's soccer team returns all of its major contributors from the 2018 season. It will be up to head coach Jason Hamilton to fit together the returners with three newcomers in the middle of the field. east carolina university, ECU, women's soccer, midfield, august 9, 2019
Home
Categories
Login 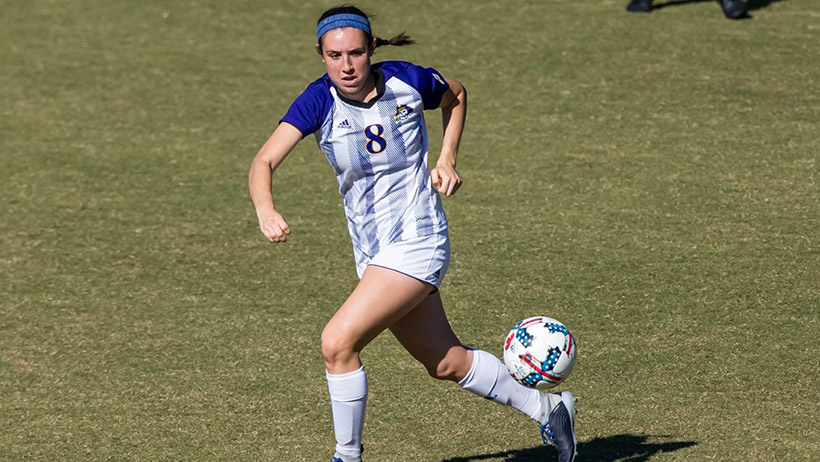 GREENVILLE, N.C.     Like the defense, the midfield for the ECU women's soccer team returns all of its major contributors from the 2018 season. It will be up to head coach Jason Hamilton to fit together the returners with three newcomers in the middle of the field.

Alexia Moore started 17 games in the midfield for ECU, playing 1,134 minutes. She was a constant presence in the lineup, playing at least 60 minutes in 13 games.

"Lexi was a true warrior last season for us, battling through multiple injuries," said head coach Jason Hamilton. "She used the down time to rehab and get herself healthy. Getting her fit and back to game shape is something that we are working on before jumping in to the full swing of things. She was key last season in protecting our backline in the defensive midfield role."

Marianna Shurina is one of just four seniors on the roster and will be the most experienced player in the midfield, having played all 55 games over the past three seasons. In 2018, the Celebration, Fla., native scored against Richmond. She also converted a penalty kick as ECU advanced against SMU in the AAC Championship First Round. After playing more than 60 minutes once through the first 16 games of the season, Shurina played at least 60 in the final three, including 98 against SMU.

"Mari was and will again be the utility player that can fit multiple roles for us," added Hamilton. "She peaked towards the end of the 2018 season and we are hoping that momentum is carried in to this year. Mari may see herself in multiple positions from game to game and even within each game."

Grace Doran is one of two returning Pirates that earned postseason accolades in 2018, as Doran earned a spot on the AAC All-Freshman Team. Doran had four points, scoring a goal against Radford while tallying assists against Richmond and Houston. Doran was an offensive threat throughout the season, taking at least one shot in 17 of the 19 games.

"Grace had a good first year with us and filled an attacking central midfield role," Hamilton said. "Having just recently competed in the WPSL Semifinals and working on a few areas to improve, we hope that she will come in and build off of the last season where she was voted to the AAC All-Freshman Team."

Madie Knaggs took on a bigger role in the midfield during her sophomore year, playing in 16 games. She scored the first two goals of her collegiate career in consecutive games, finding the back of the net in wins over SMU and UCF. Her goal against the Mustangs was the game-winning goal that helped start a run of five wins in six games for the Pirates.

"Madie is a very hard worker and came in to camp last year ready to go," Hamilton commented. "She's been playing all summer which is a great sign. She scored some big goals for us last year in conference and is a gamer. She saw her matches played from freshman to sophomore year double and we hope she continues to progress."

Rounding out the returners in the midfield is Catherine Holbrook. Holbrook played in just three games during her rookie season but is poised for more minutes in 2019.

"The most improved person on our roster since last August, we are excited to see Cat's progress from the summer," Hamilton said. "She didn't get many minutes last fall but saw a lot of action in the spring for us. She had the opportunity to be on a very good team this summer and being in that environment is something she said has helped her even more."

Melissa Fernandez will return to North Carolina after spending her first two collegiate seasons at Auburn University at Montgomery. The Cary, N.C., product appeared in 33 games for the Warhawks and had seven points (one goal, four assists) including five in 2018. She helped Apex High School earn back-to-back trips to the North Carolina Women's Soccer Class 4A State Championship during her prep career.

"Melissa brings a lot of experience to the team having played in over 30 college games thus far in her career," Hamilton said. "She brings a lot of good qualities, she is two footed, dangerous on set pieces, can play inside or out, attacking or holding, and more."

Sophia DeMark arrives in Greenville after being named to the Big South All-Conference team on three occasions while at South Point High School. She also played for the Charlotte Soccer Academy, helping her team reach the final of the North Carolina State Cup.

"Soph has the ability to be one of those utility players going forward," said Hamilton. "She is a good athlete who is physically ready for college soccer. Once she learns the game at a more tactically advanced level, she should see a lot of success. Finding the right spot for her in the college game is a challenge we look forward to taking on."

Alyssa Palmucci was one of the best players in New Jersey while playing for Kingsway Regional, helping the Dragons win a pair of Tri-County Championships. She was a Top Drawer Soccer All-American Top 400 selection as well as a NJGSCA All-State honoree. Along with playing at Kingsway Regional, Palmucci helped lead the LMSC Storm Club team to a trio of Pennsylvania State Cup championships.

"Alyssa has a high soccer IQ, which is great for the middle of the field," added Hamilton. "She sees the game well and has that sense of pressure. How quickly she can adjust to the speed of things in the college game we hope will not take her long."