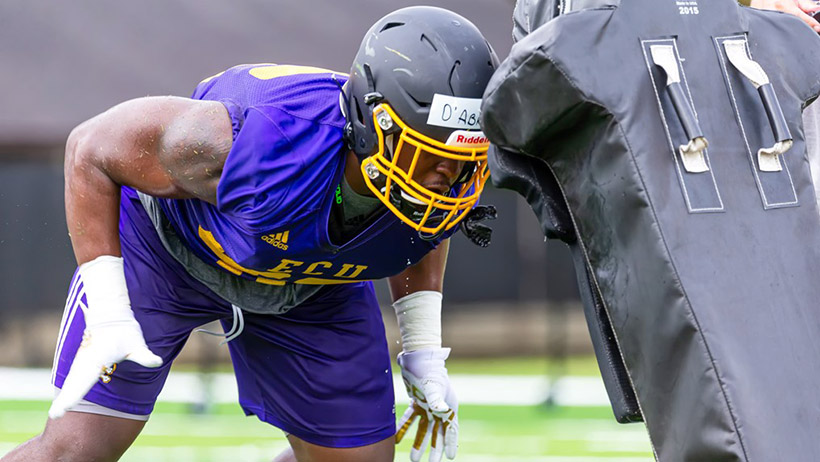 GREENVILLE, N.C. — With Saturday's scrimmage just over the horizon, the East Carolina Pirates throttled back a little during Friday's practice.

Mike Houston's squad worked under the warm August sun in black helmets and dark shorts without any pads, a welcomed reprieve from the last two outings that included full gear.

Friday's first flurry of activity involved multiple special teams drills on the turf field. Players, early designees on the 'hands team' unit, dove on the football to simulate on-side kick recoveries, while punters booted the ball high and far delicately trying to find a landing spot inside the five-yard line before it skipped out of bounds.

The kickoff team sprinted down the field, the return men tracked the ball tumbling end over end toward them and the up-men tried to put a purple blocking pad on the defender coming at them.

"It was a little chaotic since it was the first time we've done it this fall," Houston said of the added emphasis on special teams drills. "The thing we've found over the years is by working those fundamentals so diligently every week during the season is that our special teams improve as the season goes on."

Houston is expecting returning kicker Jake Verity and punter Jonn Young to build on a solid 2018 campaign. Verity nailed 19-of-21 field goals to earn All-AAC honors in his sophomore campaign, while Young averaged 40.5 yards per punt after transferring from West Virginia.

"I couldn't be more pleased with Jake and John," Houston said. "They've been really solid during camp and we're blessed to have two guys handling those two spots that we believe in and trust."

Another unit the coaches plan on improving every week is the defensive line. While the sound of toe meeting leather and sudden bursts of speed emanated from the turf, a group of defenders labored in near silence, broken only by coach Jeff Hanson's instruction.

"I'm a very detailed teacher," Hanson said. "We start with a couple of basic techniques and go from there, so it becomes second nature in a game. I expect my players to be disciplined and focused and that starts with hand and footwork and builds from there.

"We're very detailed in teaching them how they need to step and the rest of it. You build it by going over it and over it every day. I expect them to progress to doing it full speed and getting it right. Alex Turner and Kendall Futrell have done very well making it second nature since spring practice. It's the first time through for most of the freshmen. They don't have it yet, but a couple of them are going to be very good players."

Hanson started coaching in 1971 as a graduate assistant after his playing days ended at the University of Richmond. He joined Houston's staff at James Madison in 2016 at current Pirates' defensive coordinator Bob Trott's behest, then followed Houston to Greenville.

"There are so many (head coaches) in this business who only care about wins and losses," said Hanson. "Coaching is not only about teaching techniques, more importantly it's about teaching kids to be successful in life and Coach Houston is one of those guys.

"I think every player in our room knows I and the rest of the coaches care about them. They want to work hard for us because they know we're doing it for the right reason."

Saturday's scrimmage inside Dowdy-Ficklen Stadium will be the first game-like situation for the players to show their coaches what they've learned. For the coaches, the contest will serve as their first opportunity to critically evaluate their personnel.

"I'm excited about what tomorrow is going to be," Houston said. "I expect a competitive energetic scrimmage and a chance to really start establishing our depth chart. We'll have a full crew of AAC officials and we'll start with various special team situations -kickoff vs. return, punt vs. return and field goal block.

"I have a script of where the ball is going to start on each drive and we'll put them in as many different situations as they'll see in a game."

For Houston, his expectations are for the Pirates to compete - a message that has resonated with his players since his hiring last December.

"I really want to see us compete, be very aggressive and execute at a high level," Houston added. "A lot to times what happens in the first scrimmage is that guys get all ramped up and then you go out there and have false starts and busted assignments. I think we (coaches and players) are excited to see what we are capable of doing after one week of camp."