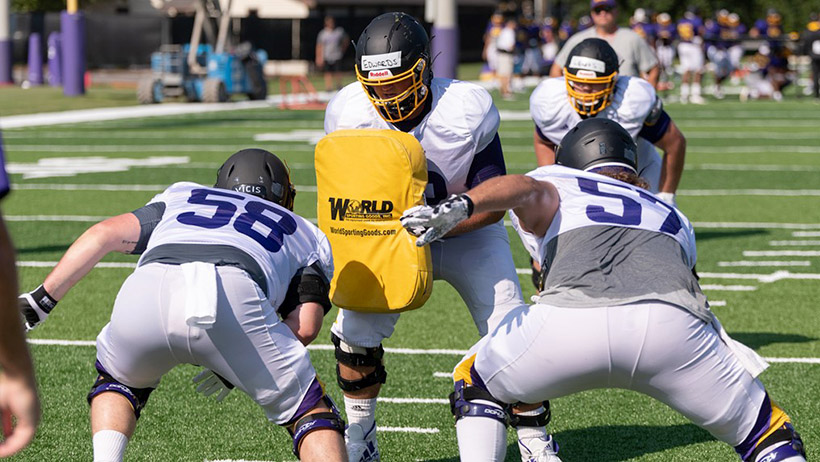 The second day in full gear was as focused and intense, but in a less flashy, more even-keeled fashion.

"It was a challenge," head coach Mike Houston said. "We talked about it in our staff meeting last night and this morning, that after four days in pads, the second day in full pads and pushing ourselves that today would tell a lot about who we were because you're going have heat to deal with, you're fatigued, your body hurts and you are aching right now. This is a true indicator of mental toughness and leadership.

"I saw some guys continue to improve, continue to push and rise up to play at a high level during a challenging practice. I also saw some who reverted a little bit. The big thing to talk about is how do we handle adversity. The guys that are rising up, they've got to grab somebody and bring them with them."

Competition is ongoing at all almost every position as the first-year staff continues the process of both evaluating and teaching technique, while making sure play doesn't get too physical too soon. All the while, the culture change within the program continues.

"You have to be smart about how you structure practice," Houston said. 'We had two live periods today, one in the middle and one at the end, so we are trying to balance all of that. At the same time, when you are trying to change a program from what has been a finesse, pass-first, perception as a soft football team into what we want to be, you can't let your foot off the gas. We have to overcome mental weakness and all the things that have haunted our program in the past. To do that we can't be distracted and must keep pushing forward."

Houston and his staff have tried to hammer home that philosophy during breaks in practice by making sure each unit runs to water stations together, with a do-over if they don't. It's a time for teammates to encourage each other to push through the heat and fatigue to continue to improve.

"Today was the kind of day that we needed it to be," Houston added. "It was about that 'Tough Times Don't Last, Tough People Do' shirt I wore on Saturday. The mentally weak fold. We need to be a team that preserves and overcomes adversity and that's where leadership comes in."

Ask any football leader where games are won and he'll tell you the trenches - the offensive and defensive lines.

"ECU is a special place," Shankweiler said. "All three of my children grew up here in Greenville and two of them graduated from ECU. This is home to us. Coach Houston has the characteristic that all great coaches have - demand - and he's never backed off from that. He demands the best from everyone every day and that's what it takes to build a consistent winning program."

Thursday was another step toward consistency for Shankweiler's unit. Two groups, four at a time, sometimes the reverse, worked on various hand and foot drills designed to open holes for running backs or to protect the quarterback over and over, then again.

"They've had three line coaches in three years," Shankweiler continued. "So, it's starting over three straight years in teaching kids to play a position that's unnatural. They are trying to move a 300-pound man when he doesn't want to be moved.

"The fundamentals of the feet to maintain lower body strength and hand placement to control the defender is critical. They've had to unlearn old habits and figure out the way I teach it. Their effort has been fine and we have a chance to be good at some point. However, right now, we are a work in progress with all positions up for grabs. We need the best five guys. I don't care if we go with five centers. We need the best five on the field at the same time."

The process continues Friday with the first scrimmage of fall camp set for Saturday morning inside Dowdy-Ficklen Stadium.