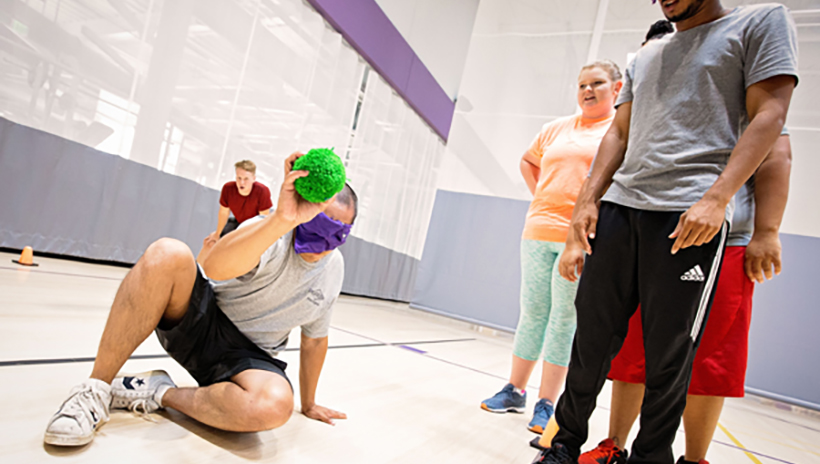 During their first week at ECU's Brody School of Medicine, first-year medical students are inundated with typical orientation-related activities, such as learning about the school's policies, classes, exams and technology.

But before they are presented with their professional attire during the annual white coat ceremony that culminates orientation week, the students don sneakers and athletic clothing to have some fun together during team-building exercises that will likely reap benefits long after their medical education is complete.

They are directed to work together to complete a variety of tasks, such as conquering physical challenges while blindfolded or navigating their entire group across a room by stepping on a limited number of pads.

"Medicine is now a team sport. You not only need to work with your physician colleagues... but also with all kinds of staff members who are involved with all aspects of patient care," said Dr. Kori Brewer, a professor in Brody's Department of Emergency Medicine. "It is not a singular position anymore. And the earlier they learn that - and learn teamwork, shared governance and shared decision making - it'll serve them well down the line."

Brewer added that the students had to "work very hard as individuals" in order to get into medical school.

"What we need to instill in them early is the fact that they're going to have to trust their colleagues, work with their colleagues and have a shared vision in order for everyone to be successful as a physician," Brewer said.

Wednesday's team-building activities also served as the first time the Class of 2023 was divided into the small groups that they will work with during their first two years of medical school. They were also paired with faculty members who will lead their groups during this important phase of their medical education.

"This is their first time in those groups and being able to see who they will be mostly interacting with for the rest of the year," said Mackenzie Baciuska, who helped to organize the orientation events for Brody's Office of Student Affairs. "And not only are they getting to know their classmates and building communication skills, they're also getting to know their faculty and staff, and starting to build that relationship as well."

Lauren Robertson, a first-year medical student from Roanoke Rapids, said she chose to attend the Brody School of Medicine because she is very interested in patient education - not just healing patients, but also educating them - and that she saw many of those traits in Brody's curriculum.

Robertson, who received her undergraduate degree from Wake Forest University, said the team-building exercises will help the students be able to communicate better as a class - both in medical school and as physicians in the future.

"There have been a lot of laughs today. The communication exercises have been really great and really eye-opening," Robertson said. "We are all from North Carolina, but we have really different perspectives and backgrounds. I think this will help us communicate better together and have a greater respect for everyone."

First-year medical student Olajide Olatidoye said he grew up knowing that he wanted to be a doctor because both of his parents are physicians.

The Wilmington resident and North Carolina A&T State University graduate said he is aware that he can be a competitive person at times, but that the family atmosphere at Brody and the opportunities to work together with his peers will help him to be a better physician.

"Working with a group of people on complex ideas is what medicine is all about, so being able to know that you can work with them and communicate to figure things out is really important," Olatidoye said. "That's the way it's going to be in residency with high-level problems and with an attending physician looking at how you solve cases. It's more of a team effort, not an individual thing, and we're getting introduced to that now."