Not only does the ECU women's soccer team bring back its entire backline from 2018, but the Pirates will also add four new members as they try to improve on a defense that ranked fourth in the conference. east carolina university, ECU, women's soccer, backline, improvement, august 8, 2019
Home
Categories
Login 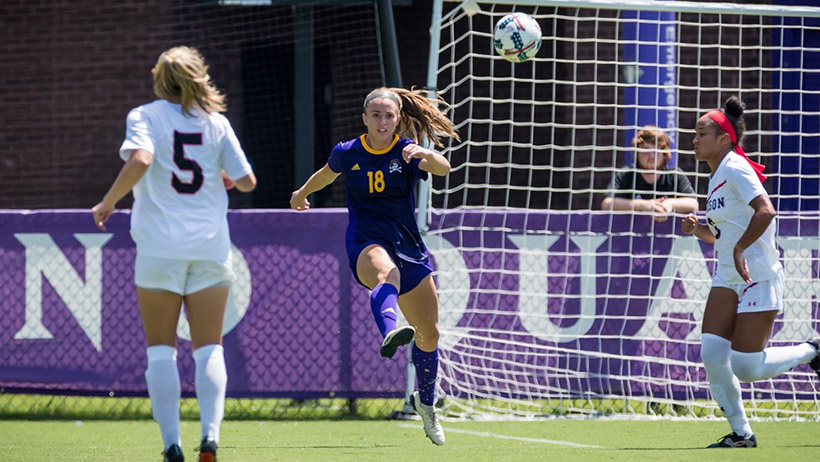 GREENVILLE, N.C.     Not only does the ECU women's soccer team bring back its entire backline from 2018, but the Pirates will also add four new members as they try to improve on a defense that ranked fourth in the conference.

"We saw nothing graduate from last season in our backline, but know it is where we need to get better this year," said head coach Jason Hamilton. "With a tougher schedule this season, we have to limit the mistakes that lead to goals. We have to be able to win games 1-0, and we let a few of those games slip away after taking the lead. Having more depth in the backline should be able to help accomplish this goal. This group will also allow us to play in different shapes than last season which can help us be less predictable."

Kim Sanford started the season in the center back role, but contributed all over the field throughout the year. The junior set new career highs with seven points on two goals and three assists. Sanford was named the AAC Defensive Player of the Week on Aug. 27 after helping ECU tie then-No. 16 NC State and scoring a goal to go with an assist in a win over Davidson.

"Kim did a very good job for us last season," commented Hamilton. "She even stepped into some other roles over the course of the year which we could see again this season. She has worked very hard since last November to get better in a few areas that she knew she could grow. We are hoping that she grows in to a leader on the field this season as well."

Carsen Parker was one of ECU's most reliable players during her first season in Greenville, finishing third on the team with 1,591 minutes played despite missing one game. She scored her only goal of the season on a penalty kick against Radford. In her 18 games played, Parker went the distance on 10 occasions, including playing more than 100 minutes in three games.

"Carsen is one of those players whose name doesn't show up much on the stat line, however she is solid back there for us day in and day out," added Hamilton. "You know what you are getting with Carsen, and sometimes as a coach that is the best thing you can ask for."

Addison Salz played a key role in the defense during her freshman campaign, racking up 1,043 minutes on the field despite missing three games. She played all 90 minutes on three different occasions while also playing all 102 minutes against Houston.

"Addi gave us quite a few minutes last season, which was great to get from a freshman," Hamilton said. "She's been a little banged up since the beginning of the spring but is getting healthy at just the right time. Being left footed it gives up options in how to play against certain opponents."

One of just four seniors on the roster, Jayda Hylton-Pelaia is the most experience Pirate on the backline. Hylton-Pelaia racked up honors in 2018, earning a spot on the All-AAC Second-Team as well as the AAC Championship All-Tournament Team. She set new career-highs with two goals and four assists while finishing second on the team with 1,695 minutes played. In her 19 games, Hylton-Pelaia played the entire game in 14 of them.

"Jayda was one of our top players on the team last year both defensively and offensively, and we have very high expectations for her," said Hamilton. "She will be coming off the Pan-American games with Jamaica when she gets to camp. I feel this is an advantage for her getting games under her belt, being a little more game fit, and having been in a good training environment to prepare for our season."

Morgan Dewey came to Greenville after a freshman season at Louisville and instantly improved ECU's defense and set pieces. Along with holding down the left back position during all 19 games, Dewey racked up four assists, with three of those helpers coming from either corner kicks or free kicks.

"Morgan is coming off of an injury from the spring, but is progressing very well," commented Hamilton. "Some of the new faces will compete to fill her role and once she returns it gives us another left footed option that is very dangerous in the attack."

Erin Mikalsen returns after helping ECU in both the defense and midfield in 2018. Mikalsen's most important contribution came in the AAC Championship First Round when she scored against SMU to level the contest at 1-1. ECU went on to beat SMU in penalty kicks to advance to the AAC Semifinals for the first time since 2014.

"A player that split time for us as a back and midfielder last season, she could again see time as a back or higher up the field like before," mused Hamilton. "A left sided player with a lot of energy and good experience gives us more options at the outside back position."

Taylor Platt will be looking to make a bigger impact this year after she was limited to just 73 minutes in five games during her freshman season. The Exton, Pa., native was an All-State selection during her prep career.

"Taylor got some minutes last season, but an injury prevented her from getting much action for us," added Hamilton. "We are hoping that she is back to herself and comes in with a lot of energy. She has the ability to be a very good outside back for us."

Two of the newcomers in the defense bring collegiate experience. Maycie McDougal held an integral role in Louisiana Tech's defense during the 2018 season, playing all 21 games.

"We are excited to see Maycie and what she brings to this group," Hamilton said. "Having played over 1000 minutes last season as a freshman at Louisiana Tech, she is an option to come in right away and fill the void left from (Morgan) Dewey. She has the ability to play wide or inside on the back line and being two footed gives her the ability to be on the right or left side."

Mikala Rhody comes to Greenville after two seasons at Vanderbilt where she helped the Commodores win the 2018 SEC Championship.

"Mikala brings us more options in the center of the back line and possibly other positions," Hamilton said. "Coming from Vanderbilt and the SEC, you can see the competitiveness she has in her. She just needs to get back to game speed and game fitness after taking the spring off from soccer with her transfer."

Sierra Lowery comes to ECU from Wakefield High School where she was an All-Conference and All-Region selection. She also helped the NC Courgae win the 2017-18 Girls Developmental Academy Southeast Division Championship.

"A very technical outside back, Sierra is a soccer player," said Hamilton. "Her ability to keep the ball and get in advanced positions up the field fits well with our style of play."

"A naturally left footed player, Katie is most comfortable as a center back," finished Hamilton. "She also has the possibility of playing on the left side or as a defensive central midfielder. As with most freshman, it will all depend on how quickly she adjusts to the college game."