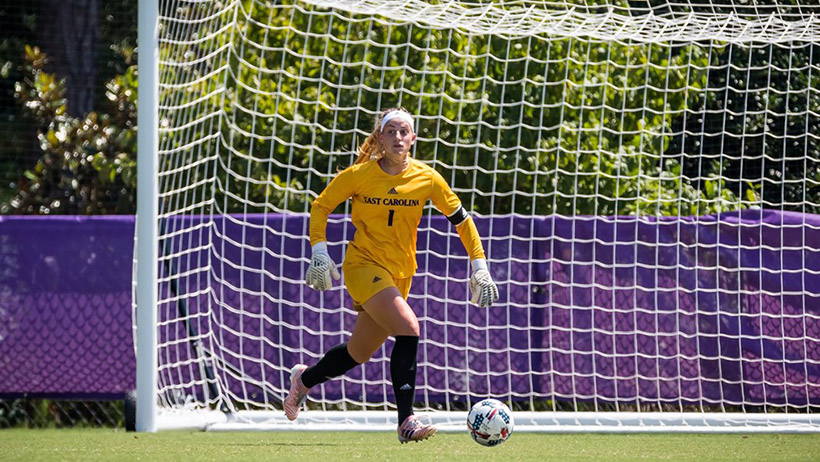 GREENVILLE, N.C.     After a season with very little depth at the goalkeeper position, the ECU women's soccer team has added a transfer as well as a new goalkeeping coach to work with returning starter Melanie Stiles.

Stiles returns for her second season with Greenville after starting all 19 games during the 2018 campaign. Stiles finished with 87 saves (2nd in the AAC), a 1.17 goals against average (5th in the AAC) and six shutouts (2nd in the AAC). The Bowie, Md., native earned a place on the AAC Championship All-Tournament after helping ECU push past SMU on penalty kicks in the First Round. Stiles finished the regular season with three straight shutouts and was named the AAC Goalkeeper of the Week. Her 10-6-3 record represented the most wins for an ECU goalkeeper since Christiane Cordero had a 10-7-3 record in 2012.

"Mel is coming off of a fantastic year for us, and we have high expectations for her," said head coach Jason Hamilton. "She made the decision to come to ECU over some bigger programs when making her decision to transfer based on having the chance to come in and compete to be one of the best keepers in the conference. She finished the regular season with three straight shutouts and then was huge for us in post season play. She has the mindset that a lot of coaches look for in players, all business all the time. The work she puts in when she is away from the team is first class, we know she will be ready on day one. We have highlighted some areas that we want to see her improve on and we will focus on those areas as we lead up to the season."

Joining Stiles will be LIU Brooklyn transfer Meaghan Haley. The Scituate, R.I., product appeared in four games for the Blackbirds during her freshman season. She finished with 16 saves and a 1-1-1 record, including a career-best six stops in a win over Saint Peter's. Prior to heading to LIU, Haley was a Connecticut All-State selection at the Pomfret School as well as helping FC Boston win the ECNL NE Regional Division.

"Meaghan is transferring in from LIU Brooklyn where she got some experience last season as a freshman," Hamilton said. "She is another player that I had recruited in the past so there is a high level of familiarity on both sides. She will give us depth in such a crucial position, which is key. Last year we pushed Mel through the season, and she had to play through some knocks. Having someone we are confident to step in to games and play will allow us to not have that situation. Mel won't have to start every game this year and with the position being so tough on the body, that is a good thing."

Stiles and Haley will be mentored by first-year assistant coach Courtney Hofer. Hofer was most recently playing professionally for Empoli FC in Italy. Hofer has experience in the American, having spent her final year of collegiate eligibility at Connecticut where she finished sixth in the conference in saves per game (4.40) and 10th in both total saves (44) and goals against average (1.70). Hofer started her collegiate career at TCU, helping the Horned Frogs reach the first NCAA Tournament in program history.

"Adding (assistant coach) Courtney (Hofer) to our staff will be very good for us this season, she has good ideas and energy that will make the keeper environment very professional," added Hamilton. "The duo she has to work with both have the right mentality and work rate to push each other and make each other better."