After reporting back to campus on Monday, the ECU women's soccer team was on the practice field bright and early Tuesday morning as the Pirates opened up the 2019 preseason schedule. east carolina university, ECU, women's soccer, august 6, 2019
Home
Categories
Login 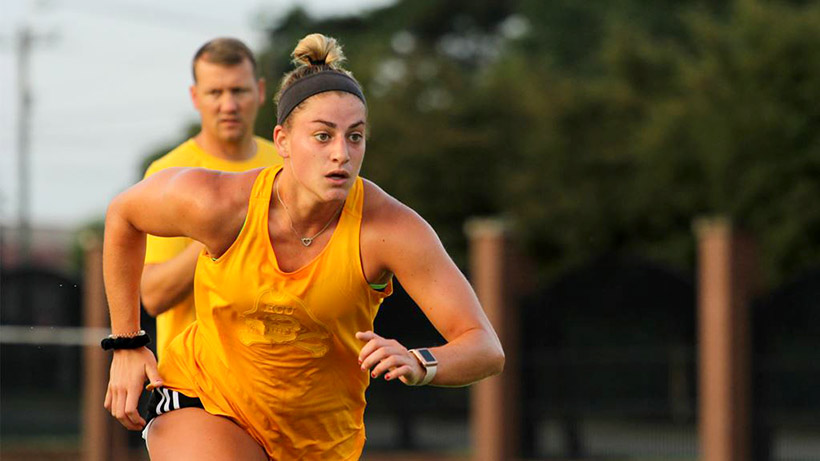 GREENVILLE, N.C. — After reporting back to campus on Monday, the ECU women's soccer team was on the practice field bright and early Tuesday morning as the Pirates opened up the 2019 preseason schedule.

"It's great to be back out. We're ready for the season to get going," said head coach Jason Hamilton. "It's tough to be a sport that doesn't get to be with their team in the summer and then has a very short window to get ready. We know we've got a lot of work to do. We're just glad to have the girls back and will start getting after it."

The Pirates returned to campus on Monday and got together for the first time as a team that afternoon with a team meeting that included a presentation from ECU's Director of Sports Nutrition Kristina Parrish. The players took the field for the first time Tuesday morning in a session that started with the team's annual fitness test before moving into a training session.

"Just a few things that we told the team yesterday in our team meeting is that we have to be better than we were last year, on both sides of the ball," Hamilton said. "We have a much tougher schedule. We kind of talked about being road warriors. We have to wins games on the road this year. Last year, we were set up to play teams at home where we had a better chance of winning, especially in conference. This year, we play the top three teams in the conference at home. That means we're going to have to obviously take care of business at home, but we also need to go on the road and get some wins to be able to compete in the conference like we did last year. That's going to be the big thing, putting them through adversity in training, making it tough so that when we're on the road in other environments, they're ready to be successful."

ECU will have high expectations after a successful first season under Hamilton. The Pirates went 10-6-3 and reached the AAC Championship Semifinals in 2018, marking the first time since 2014 that ECU had won double-digit games as well as reaching the final four of the conference tournament. ECU was especially dominant at home last year, going 8-1-0 inside Johnson Stadium, including going 4-1-0 against conference opponents.

The Pirates will have just 10 days together before their first game action as VCU will come to Greenville for an exhibition match on Friday, Aug. 16. The season will officially get underway on Thursday, Aug. 22 when ECU welcomes George Mason to Johnson Stadium.

"We need to get the new players caught up to how we play and how we do things so they're on the same page with all of our returners," added Hamilton. "We need to pair some players up and see how people work together in different partnerships to see what we're going to do with our lineups. Overall, we just want to see what people did this summer to prepare and who's ready to go."

All home games this season will be played at Johnson Stadium and are free for all fans to attend. The 2019 schedule can be found HERE.