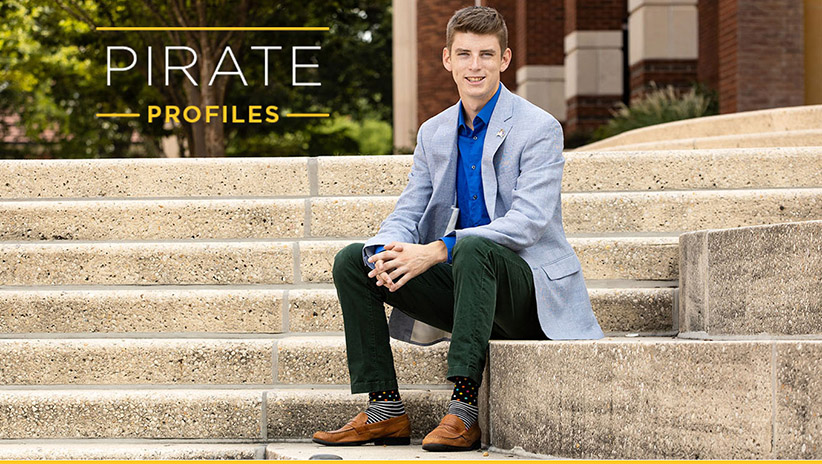 Joshua Spears is an Honors College student at East Carolina University who wants to get others connected and see them succeed.

Spears, a rising senior from Emerald Isle, originally started college as a dually-enrolled high school student at Carteret Community College, where he was the Student Government Association (SGA) president, finished with a 4.0 GPA and received an associate degree.

"I came in to ECU with a lot of credits, and I also wanted the full college experience and wanted to get into the Honors College here," Spears said.

Spears is majoring in economics and classical studies with a concentration in classical civilizations. He is pursuing minors in English and math and is working towards earning an entrepreneurship certificate.

"I've changed my major several times since I've been at ECU, but I think it's OK as long as you're finding value in the classes you take and you're spending time doing something you enjoy and can apply that to the future," Spears said.

Spears said he was originally going to triple major but decided to get more involved on campus.

And he certainly has.

Spears is an intern this summer in Greenville for RISE29, a Golden LEAF Foundation-funded program through ECU's Division for Research, Economic Development and Engagement. RISE stands for Rural Innovation Strengthening Eastern North Carolina, and 29 refers to the 29 counties in eastern North Carolina. 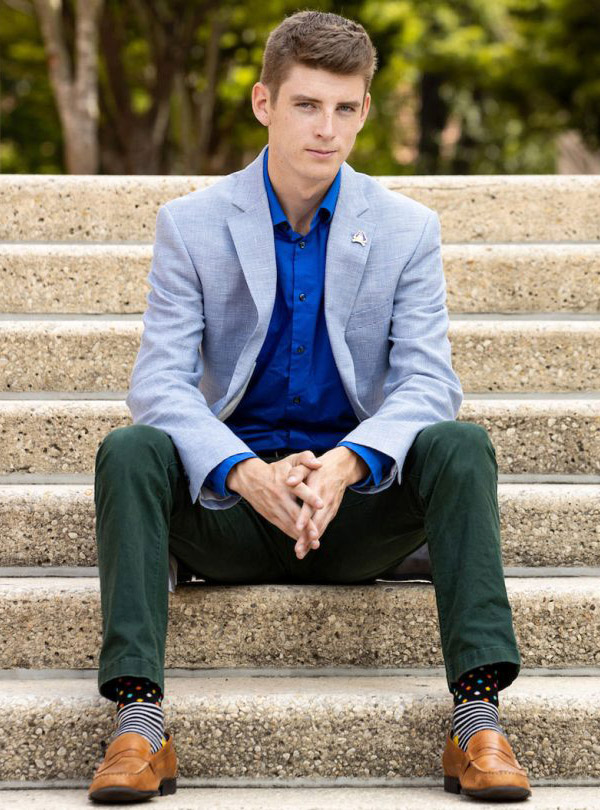 Spears is majoring in both economics and classical studies and plans to attend graduate school to earn an MBA or economics degree.
"The program is trying to connect interns with businesses and local governments to make sure they promote economic and community developments. These can be things like working on succession plans or business," Spears said.

"I'm working on rural broadband so I've been researching rural broadband companies, different electric and telephone cooperatives throughout the state to try and make connections so that we can help people who don't have proper internet access and try to get them connected to the resources that they need," he said.

Spears said the program would partner with the Miller School of Entrepreneurship, which he hopes will encourage students to start businesses in rural parts of the state instead of working in bigger cities.

This fall, Spears will begin his second year as a resident advisor for Gateway West. He also will serve as SGA's director of academic affairs.

"I will head a committee where our focus will be the academic success of students and it can involve things like textbook costs, nutrition, mental health, not just their grades," said Spears, who has been involved with the SGA since last year. He received the Helen Bahnson Award, which is given to an SGA member who shows great leadership and is dedicated to the student body.

Spears is also interested in game theory and econometrics that are taught through the economics department. Econometrics involves applying statistical data to economic data to determine economical relationships.

"Game theory can be games, politics or refugee movements. We are trying to find out decisions that different entities would make so we can predict what they'll do or figure out what the best outcome of the situation is," he said.

Last summer, Spears studied with the ECU Italy Intensives Program. He also received the Papalas Award, which is given to the classical studies student who shows outstanding performance and is involved in the department.

Spears has received various scholarships from ECU as well including the Class of 1982 Scholarship, Chancellors Fellow Award, Papalas Award, and the Economics Department Advancement Council Merit Scholarship. In addition, Spears also has received two scholarships outside of ECU, which are the Sunshine Lady Foundation Award and the Carteret Craven Electric Coop College Scholarship.

After graduation, Spears plans to attend graduate school and earn an Master in Business Administration or economics degree.

What is something cool about ECU that you wish you knew during your first year? Einstein Bros. Bagels has the best pizza bagels anywhere. You definitely need to try it with barbecue potato chips and a classic Honest Tea.