The East Carolina Pirates walked a little taller and looked a little bigger as they returned to practice Monday morning. Day three on the field was the first in shoulder pads as the march toward the August 31st opener in Raleigh against NC State continues. east carolina university, ECU, football, shells, practice, august 5, 2019
Home
Categories
Login 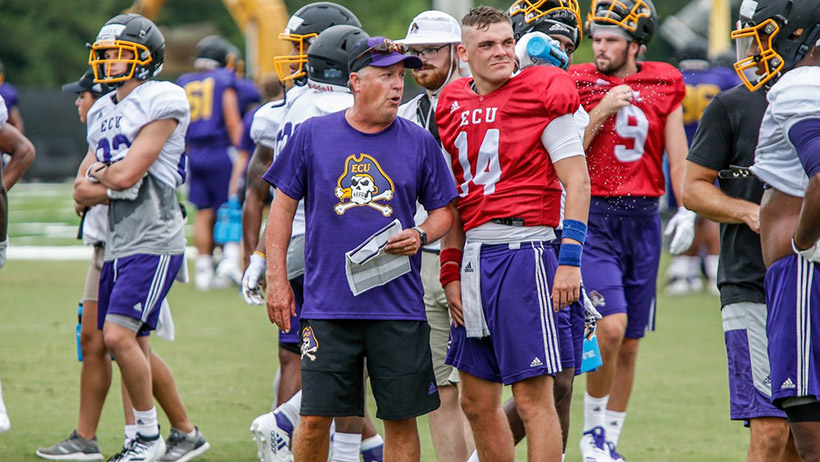 GREENVILLE, N.C.     The East Carolina Pirates walked a little taller and looked a little bigger as they returned to practice Monday morning. Day three on the field was the first in shoulder pads as the march toward the August 31st opener in Raleigh against NC State continues.

Balls flew through the air as the pads popped throughout the two-and-a-half-hour session that featured plenty of humidity and periods of sunshine, especially when the squad conducted its 11-on-11 work. The position groups moved through their rotations at a brisker pace and with a more business-like purpose after a day off Sunday.

"I thought we continued to make strides today," first-year head coach Mike Houston said. "I told the kids we would be in pads virtually every day from now until game week. I thought there was good and bad, which is what happens when you incorporate contact. Our offensive linemen continued to improve and responded well to contact with solid execution. Defensively, Kendall Futrell has been a bright spot. He missed spring practice with an injury, but has returned to make some big plays for us. We need his athleticism and leadership.

"Everyone needs to improve their fundamentals with the pads on, but we'll continue to work on it and get better tomorrow."

After Saturday's practice Houston mentioned the progress the receivers had made. That continued Monday with very few dropped passes and several nifty catches in coverage during the team-on-team segment.

"We have returning depth at that position, so you would expect them to start strong," Houston said. "The younger guys have had some moments as well." Senior Deondre Farrier (30 catches in 2018) along with sophomores Blake Proehl (29) and Leroy Henley (20) are the top returnees on the unit.

Those three will join more of their teammates on the field at the same time this fall as the Pirates return to the concept of inside and outside receivers, made popular (and successful) under former ECU Offensive Coordinator Lincoln Riley. Current coordinator Donnie Kirkpatrick was the Pirates' inside receivers coach then and took the look to James Madison as Houston's OC with the Dukes.

"It's the continued evolution of what they called the old Air Raid offense a few years ago," Kirkpatrick said, explaining the formation of four receivers - two closer to the sidelines and two in the 'slot' closer to the line of scrimmage. The offense started in the 1980's at BYU where LaVell Edwards coached Jim McMahon, Steve Young and Ty Detmer to huge success.

Former Kentucky coach Hal Mumme added his own wrinkles as did his then-assistant coach, Mike Leach, who took the alignment to Texas Tech where it set all kinds of passing records and exploded in popularity.

Riley started his coaching career under Leach in Lubbock and brought the concept to Greenville in 2010 under Ruffin McNeill. Fast-forward to today and let Kirkpatrick pick up the narrative.

"The major differences are working the tight end into it and the run-pass option for the quarterback," Kirkpatrick said. "We also like to run the ball more out of it than they did in the beginning.

"Our tight ends have to be versatile in that they have to play as a true tight end with their hand down on the ball, flex out like a receiver and they have to play like an H back when they line up in the backfield. We think we have quarterbacks who can do the RPO and running backs who can give the defense a different look. We will line up in an outside-inside formation quite a bit, but there will be more options out of it. Defenses continue to evolve, so we have to try to stay ahead."

The new look offense is another step toward getting the fans excited to cheer on the Pirates.

"I've yet to meet an ECU alum who doesn't love this place." Houston said. "They love the Pirates and that speaks to what the tradition is here. Pirate fans are passionate about their team and they look forward to game days. I can't wait to experience it first-hand from the home sideline. We look forward to building a program they can be proud of and passionate about."