After the first practice of the preseason Friday, first-year ECU Head Football Coach Mike Houston made it clear that his squad needed to respond better in all areas Saturday, specifically playing as hard at the end of practice as they did in the beginning. east carolina university, ECU, football, preseason, mike houston, head coach, august 5, 2019
Home
Categories
Login 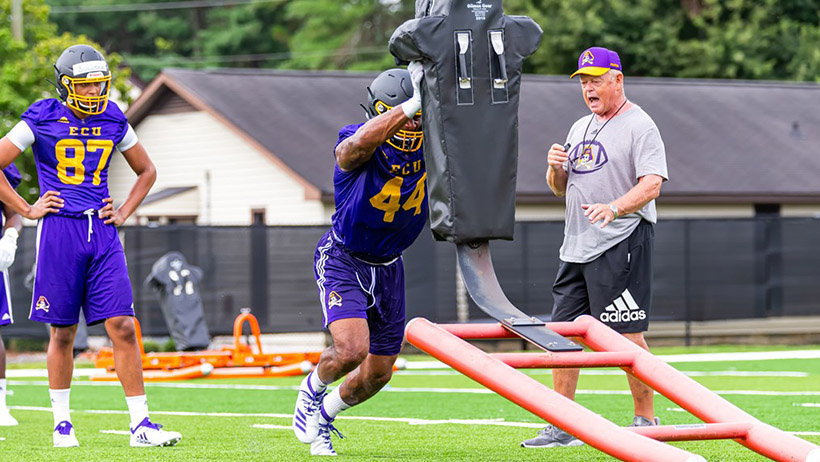 GREENVILLE, N.C.     After the first practice of the preseason Friday, first-year ECU Head Football Coach Mike Houston made it clear that his squad needed to respond better in all areas Saturday, specifically playing as hard at the end of practice as they did in the beginning.

The Pirates took the field Saturday with a skip in their step and plenty of chatter on a sunny morning, eager to get started and finish equally as strong.

The booming voice of strength and conditioning coach John Williams, Jr. rang out across the three practice fields.

"Pirates, are you ready?" He not much asked, but commanded. A hearty chorus of "yes sir" responded and calisthenics followed. Houston, clad in a gray t-shirt that read 'Tough Times Don't Last' on the front and 'Tough People Do' on the back, was in the middle of it all, observing and taking mental notes.

"We challenged the older players in our meeting yesterday," Houston said. "It was going to be a tough day for them today if they didn't respond, but they showed maturity leadership and took it to heart. It might have hurt their feelings a little bit, but they showed some pride and responded well."

The first burst of activity came on the defensive practice field. Coordinator Bob Trott split his players into three groups. Each unit sprinted onto the field, dropped to the ground, then popped up quickly. Trott fired a 20-yard pass into the ground that bounced twice. The players had to sprint to dive on the loose ball to simulate a fumble recovery. The rest of the team huddled around the man on the ground, then everyone sprinted to the sideline. Correct execution was rewarded with a break while the other two units took a turn. A do-over was in order otherwise.

During Trott's three-year tenure at James Madison, the Dukes collectively ranked first at the FCS level in turnovers forced with 97. In comparison, ECU stood 120th among all FBS squads in 2018 with only 11 takeaways, while producing only a combined 30 over the same three-season span.

"That's why we work hard in the off-season," Williams said. "Practice simulates game situations and we have to be ready and willing to push through. We emphasize nutrition, hydration, and rest and recovery to get these guys ready to go. It's not just about how much they can lift.

"Our off-season workouts are supposed to be about getting them ready for camp, which is every day and difficult. I thought we did a great job in bouncing back from yesterday and had an even better day today."

The players have Sunday off before returning in helmets and shoulder pads Monday morning. Houston will be able to tell more about his team at that point.

"These first two weeks are about us," he said. "We need to establish who we are. You will see a lot of guys get a lot of reps the first two weeks of camp. We moved some guys from the second unit to the first and vice versa today and you'll see more of that. Two weeks out from game day, we'll establish a two-deep and really start working on NC State."

PRESEASON CAMP NOTEBOOK     Another common rite of preseason camp which offers a connection to the Pirates' strength & conditioning program is the updating of player weights on the roster following summer workouts ... ECU's roster (PDF) was adjusted following Friday's workout and now reflects current weight numbers ... Perhaps the greatest gain was made by sophomore D'Angelo McKinnie, who moved from 235 (as a 2018 freshman tight end) to 277 (as a 2019 sophomore defensive lineman).