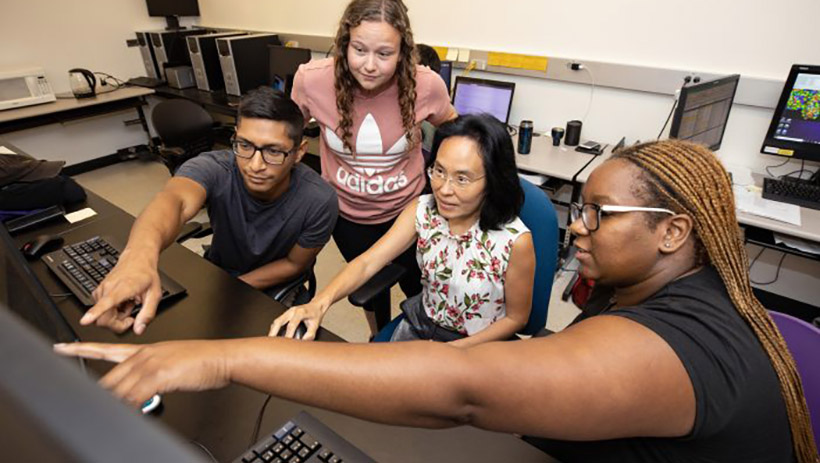 Students from universities in North Carolina and across the U.S. fine-tuned their research skills with a range of projects -from creating useful organic compounds to detecting concussions through virtual reality - at East Carolina University this summer.

ECU hosted two Research Experiences for Undergraduates (REU) sites - a new one in chemistry and biochemistry, and an ongoing one in biomedical engineering in simulations, imaging and modeling, both funded by the National Science Foundation.

Participation is encouraged by students from underrepresented groups in the sciences and those with limited or no access to research opportunities, said Dr. Yumin Li, co-director of the REU in chemistry and biochemistry.

"Our program provides research experiences to those who may not have the opportunity otherwise to encourage students to pursue STEM fields, especially graduate education," said Dr. Stephanie George, principal investigator of the REU in biomedical engineering in simulations, imaging and modeling.

Nearly 40 students, including high schoolers from across the state participating in ECU's Summer Ventures in Science and Mathematics program, presented their research interests and tested their pitches to audiences.

"There are a lot of students on campus over the summer conducting research, but we've never had an undergraduate summer symposium before," said Mary Farwell, ECU's director of undergraduate research. "We had a great turnout for our first event."

However, one project stood out. Davidson College's Andrea Robinson was named the People's Choice Award winner for her work using virtual reality with eye-tracking technology to detect concussions.

"When people are concussed, they can't control their eye movements as much. Using eye tracking will allow us to detect those deficits," Robinson said. Virtual reality will make the tests more portable, allowing assessments to be conducted on the spot instead of in an office or hospital.

"As an athlete, I've had experience with those that have suffered injuries. I want my research to be able to help them," said Robinson, a rising senior and physics major. "This research was a great way to apply my physics background and interest in biology and computer science and expand my professional network."

Avery Hatch, a rising senior at Elon University, said the REU program in chemistry and biochemistry helped her gain experience with instrumentation, equipment and research methods that she probably would not have encountered outside the program.

"It has been instrumental to my personal growth to be able to have a project here at ECU that is so different from my independent research project at my own university," said Hatch, who is a biochemistry major.

Hatch worked in the lab of Dr. Shouquan Huo, an ECU faculty member and REU co-director. Huo has successfully used platinum as a catalyst to drive reactions that create useful organic compounds. 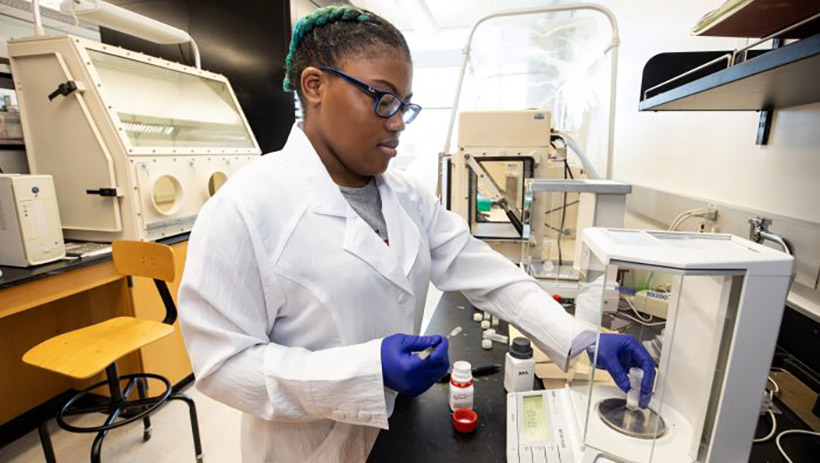 "Compounds like these are often seen in medicinal and biological contexts, so the interest in synthesizing these compounds in a safe, relatively simple, and relatively inexpensive manner is significant," Hatch said. "Dr. Huo's use of platinum as the catalyst is a novel and important method of synthesis, as it allows these reactions to proceed faster, with better yields, without the use of more dangerous or expensive additives."

Hatch intends to pursue a doctoral degree to eventually work in a research laboratory. Before that, she is applying for a Fulbright research grant to travel to Switzerland to study microplastics in food packaging following graduation. "It was incredibly helpful for me to participate in this program this summer as a stepping stone to achieve these goals," she said.

ECU engineering student Samantha Augustine said that the symposium gave researchers a chance to show that they're making an impact in the community.

"There is a diverse amount of research going on at ECU," Augustine said. "Most people do not know that we're doing this level of research here on campus. The symposium is a great chance to showcase the intelligence of our student body and let others know that the research we're doing at ECU is contributing to society."

Augustine had advice for students who haven't started their journeys into research.

"Talk to the students and professors in your department," she said. "Start doing research in whatever interests you. It's not only a great learning experience, but you do a lot of networking, get a chance to practice your public speaking skills, and it looks fantastic on your resume."

ECU offers multiple research presentation opportunities for undergraduates, graduate students and postdoctoral scholars throughout the year. The university's Capture 180 Research Challenge is open to all undergraduate students, while the Three Minute Thesis Challenge is open to graduate and doctoral students. Each spring, ECU offers presentation opportunities at its annual Research and Creative Achievement Week for students and postdocs.