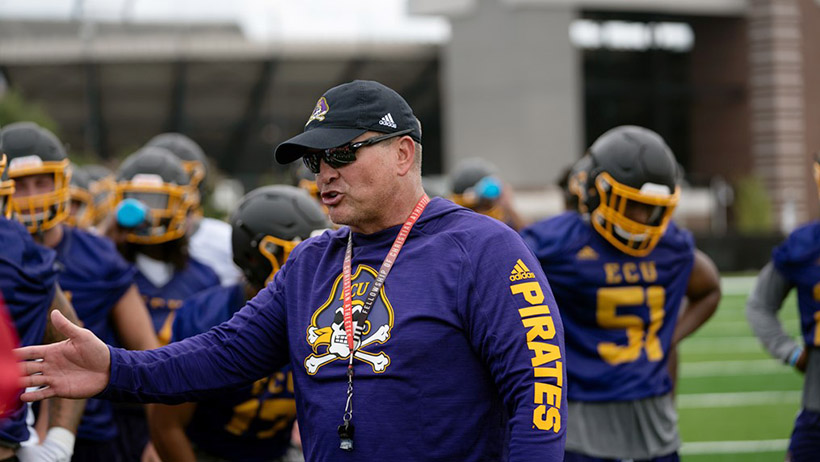 Greenville, N.C. — There's nothing like Opening Day - no matter the sport.

The first preseason practice of the Mike Houston Era at East Carolina dawned under a sunny sky with seasonal humidity as 108 pumped-up Pirates spread out over three practice fields to begin where spring drills ended.

The offense wore white jerseys, the defense came out in purple but all donned popular black helmets. There were no pads, just shorts to formally open the 2019 season. The whistle blew promptly at 9:10 and then the Jimi Hendrix classic Purple Haze blared through the speakers.

Amid whoops and hollers, organized stretching began. High knees, side straddle hops, you name it, the players did it to prepare for the next two hours. Houston, clad in a long-sleeved purple hoodie with shorts and a black cap, was in the middle of it all, excited, but intent upon setting a tone that would focus on hustle and attention to detail that he expects to translate into success on the field.

"I thought we started practice with great enthusiasm, then some guys struggled at the end," Houston said. "God was good to us today because he brought us the sun. He knew we needed to handle the heat starting with our first practice. It's going to be hot in Raleigh on the 31st, so we need to get used to it quick. You give up big plays when you are hot and tired, so it was good that it was like that today.

"The returning players know the X's and O's from spring ball, but it was new for some of the freshmen. The schemes are in from the spring as well, so today starts the building point off that. We are focused on ourselves for the next couple of weeks."

Preparation began as the Pirates broke into position groups with drills focusing on technique for the first few periods. To a casual fan, it might seem a bit mundane to work on a receiver's stance and start (first step) for five minutes or longer, but again attention to detail early could mean the difference in making (or giving up) a big play when things count.

"I thought our young guys showed good work habits today," the first-year Pirate head coach said. "Some of the older guys need to get better. That's part of changing some habits. They need to learn that they can't tap out during practice and expect to play in the game. I would a lot rather they give us three hard reps than a walkout six. We are in the process of changing habits and hopefully, that will come quickly to them."

Houston has said more than once during the off-season that all positions are up for grabs and the first practice mirrored his statement. Players rotated in and out on offensive and defensive side of the ball so everyone had a chance to show the coaches how they had improved since spring practice.

All six quarterbacks on the roster saw plenty of reps, first throwing one-on-one with receivers, who sharpened their routes at the same time. The QB's also worked on hand-offs with running backs, who were refining their form as well. That gradually morphed into seven-on-seven drills, then 11-on-11 during the second hour.

While the skill position players were running, throwing and catching, the linemen were hitting the blocking sleds, firing off the ball and hitting the blocking pads, all repeating and sometimes correcting the technique they will need to make the upcoming season a success. Offensive linemen John Spellacy, a junior and Peyton Winstead, a sophomore, returned to the field after missing spring practice with injuries. Houston was glad to see them back in uniform.

"They both had some great snaps and will help us along the front if they stay healthy," Houston said. "They give us several different center/guard combinations and that's always a good thing."

Toward the end of practice, Houston put the team through what is frequently referred to as a 'Fourth Quarter' drill. The players lined up on one side of the newly re-turfed practice field, split into position groups and sprinted the width of the field, down and back. That was the first quarter. The drill continued into the second quarter (two sprints) with a quick halftime break. Then three down and back sprints followed by the fourth quarter - you get the idea.

"We have to come out on fire for the second half," Houston added. "That's when we win games, if we haven't already won it. We have to have the commitment to back up the expectations that we and others have for this program. NC State is the most important game of the season because it's the next game. After that, Gardner-Webb will be the most important. This camp is every day and we have to get better every day. We can't slow down."