Voting system approval in North Carolina is in for yet another delay. carolina journal, elections board, vendor certification, august 2, 2019
Home
Categories
Login

Elections Board to Vote Aug. 23 on Vendor Certification 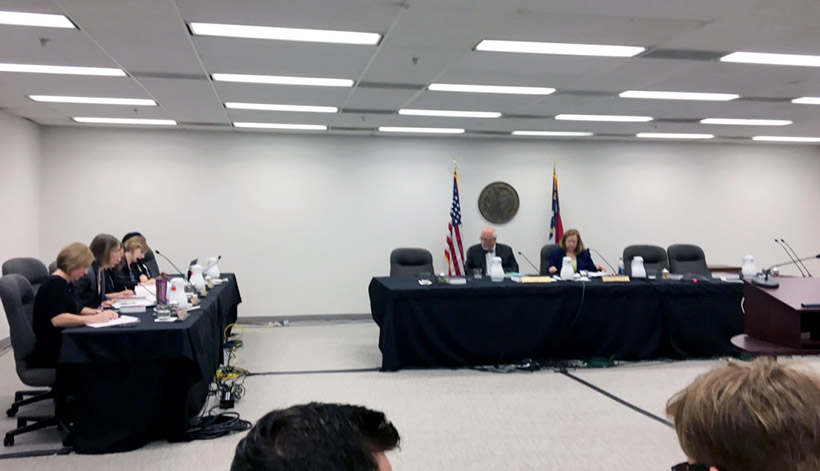 State Board of Elections members (from left) David Black and Stella Anderson at a special Aug. 1 board meeting. | Photo: Brooke Conrad/Carolina Journal

Voting system approval in North Carolina is in for yet another delay.

In a split vote, Thursday, Aug. 1, the State Board of Elections reaffirmed its decision to delay approving new voting machines until the board adopts new certification requirements. The delay has some board members worried about getting new election machines in place in time for the 2020 primary season.

Monday, the board voted 3-2 to require this standard from voting machines: "An electronically assisted marking device or other ballot marking equipment shall produce human readable marks on a paper ballot. A voter must be able to identify his or her intent as evidence by the mark on the ballot."

The elections board is responding to concerns about hacking and other interference with election technology, perhaps from foreign governments. Requiring "human readable" paper ballots would allay many concerns.

Republican board member David Black, who voted with Monday's majority, said his vote was a mistake. He says he misunderstood how much a delay could affect preparations for next year's elections. He made a motion to rescind the Monday resolution, necessitating Thursday's vote.

Black said delaying certification until the "last moment" is unfair to the three voting system vendors that have waited for certification for two years and have completed current state and national certification procedures.

In the meantime, the board's chairman, Democrat Bob Cordle, abruptly resigned. Cordle made a joke with sexual references Monday evening at a conference attended by hundreds of election officials. He resigned after getting withering criticism for the joke.

Without Cordle's vote, the 2-2 tie Thursday ensured the board would have to wait at least 15 days before adopting new requirements.

Board member Stella Anderson expressed concern that certifying the three vendors now, before adopting certification criteria, could lead to at least one vendor losing certification later. She noted that the vendors that are approved probably would be used for the next 10 to 15 years, and it's worth the extra delay.

"We have to get this right," she said. "Even though it does delay what we had intended to be able to vote on, in terms of final consideration of certification of the three vendors, we have to get it right."

Anderson restated her earlier position that the board needs a 15-day notice meeting to consider how it will modify certification requirements. The meeting is 1 p.m. Aug. 23.

It's still unclear who will replace Cordle as chair. Anderson took his place at Thursday's meeting, but said she has no idea who Gov. Roy Cooper will choose for the permanent position.

If legislative Republicans have any say, the new chairman would be Gerry Cohen. The longtime legislative attorney, who worked for nearly four decades as a bill drafter and reviewer for the General Assembly, got a vote of confidence Wednesday from Sen. Ralph Hise, R-Mitchell, and Rep. David Lewis, R-Harnett, who chair the two chambers' elections committees.

In a letter to Cooper, Hise and Lewis called Cohen "a well-known public servant whose deep knowledge and experience has earned respect from both parties. ...There are many Republicans who could do an exceptional job, but we feel Mr. Cohen meets your [Cooper's] political requirements and our professional requirements."

Cohen changed his voter registration from Democratic to unaffiliated last year to make himself available to serve as the unaffiliated member of an earlier iteration of the elections board. He serves on the Wake County Board of Elections.

Carolina Journal reached out to Cohen, who said neither Hise nor Lewis had consulted with him about the chairman's position. While Cohen said he was "very flattered" about all the praise he's getting across the political spectrum, he hasn't lobbied for the job. But he would be happy to take it if offered.