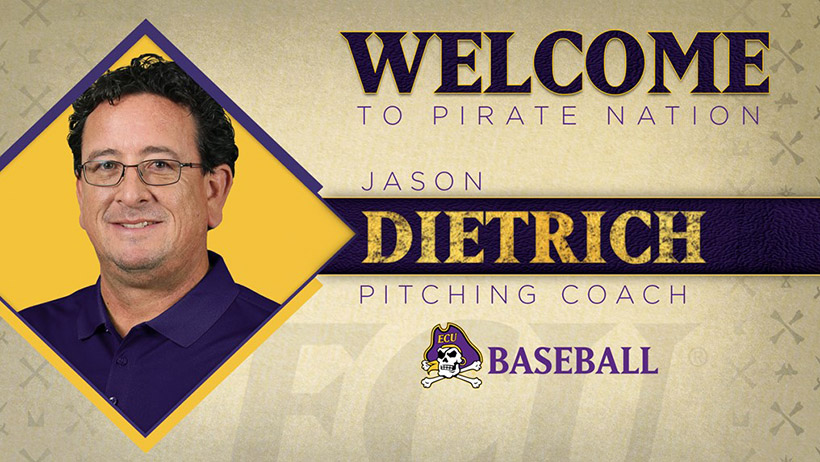 GREENVILLE, N.C. — Jason Dietrich, a nine-year coaching veteran at the Division I level and Collegiate Baseball's 2016 Pitching Coach-of-the-Year, has been named the pitching coach at East Carolina University according to an announcement by head coach Cliff Godwin Thursday.

Following stints at UC Irvine (2008-12), Cal State Fullerton (2013-16) and Oregon (2017-19) that resulted in eight NCAA Regionals and one College World Series appearance, Dietrich will work directly with the Pirate pitching staff and help associate head coach Jeff Palumbo with recruiting efforts. During his 13 full seasons at the Division I level, which includes two as director of operations, Dietrich has worked under ABCA Hall of Fame Coach Mike Gillespie (1,156 wins) as well as George Horton (1,089 wins) and Rick Vanderhook (298 wins).

"We are super excited to welcome Jason, Bibi, Dean and Leila to the Pirate baseball family," Godwin said. "Jason is a star when it comes to pitching coaches in the college game. His track record for developing pitchers and winning at the highest level is impressive to say the least. We are very fortunate that ECU Baseball has put itself in a position to hire someone of Jason's caliber to be our pitching coach. Pirate Nation, let's welcome Jason and his family to Greenville!"

During three seasons with the Ducks, Dietrich mentored a pair of All-Americans, three First-Team All-Pac-12 members and six Major League Baseball draft selections, while leading a pitching staff that ranked among the national leaders in strikeout-to-walk ratio, strikeouts per nine innings, walks allowed per nine innings and WHIP from 2017-19.

In 2019, junior Ryne Nelson led the club and Pac-12 with 104 strikeouts (fourth nationally) in 65.0 innings. The second round selection by the Arizona Diamondbacks appeared in 23 games (four starts), posting a 3-4 record with four saves while walking just 41.

Two years ago, Kenyon Yovan claimed his second consecutive First-Team All-Pac-12 accolade after posting a 6-4 record with five saves and a 2.98 ERA. The right-hander, who started the season as the closer, struck out a team-best 98 batters in 84.2 innings.

In Dietrich's first season with the Ducks, two of Oregon's pitchers received All-America honors. David Peterson became the first player in the modern era of Ducks' baseball to be a consensus All-American. The eventual first-round draft pick of the New York Mets (20th overall) lowered his ERA from 3.63 to 2.51 and was named a semifinalist for the Dick Howser and Golden Spikes Award. Under the tutelage of Dietrich, he also improved his strikeout-to-walk ratio from 2.03 as a sophomore to 9.33 as a junior. Yovan claimed a pair of All-America honors, while also being named a Freshman-of-the-Year by Collegiate Baseball and a freshman All-American by five different organizations.

The Oregon pitching staff, as a whole, ranked in the top 12 in the country in three different categories in 2017. The Ducks stood second in the nation in strikeout-to-walk ratio (3.25), while ranking 10th in walks allowed per nine innings and 12th in shutouts (7).

Dietrich joined the Ducks after spending four seasons (2013-16) at Cal State Fullerton where he led one of the premier pitching staffs in the country. He was a part of a group that won 160 games during a four-year span that included three Big West Championships, four NCAA Regionals, two Super Regionals and a College World Series appearance in 2015. The pitching staff ranked among the nation's best each of Dietrich's four seasons with the Titans.

Dietrich's pitching staffs at Cal State Fullerton also ranked no lower than third in strikeouts-to-walk ratio during his four seasons, while also ranking no worse than sixth in WHIP and seventh in base on balls per nine innings.

Before coaching at Fullerton, Dietrich spent five seasons (2008-12) at UC Irvine where he was the pitching coach during the final two. During his five-year tenure, the Anteaters posted 202 wins and made four NCAA Regionals including a Super Regional appearance in 2008. His club was 17th nationally in both ERA and walks per nine innings in 2011, and were 36th in ERA and 11th in WHIP in 2012.

Dietrich began his coaching career as the pitching coach at Arcadia High School (1999-2001). He became a college pitching coach at Los Angeles City College in 2002 before moving to Irvine Valley College (2003-06) and Cal State Los Angeles (2007). He also spent time as a pitching coach for the Hyannis Mets (2004-05) of the Cape Cod Baseball League and Southern California Fire (2003) of the Western Wood Bat League.

Prior to coaching, he played one year with the New Jersey Jackals of the Northeast Baseball League (1998) and four in the Colorado Rockies organization (1994-98) after being selected in the 19th round of the 1994 MLB Draft out of Pepperdine earning West Coast Conference Honorable Mention accolades. During his professional career, Dietrich posted a 7-2 record with a 2.84 ERA with seven saves in 44 appearances.

Dietrich, a 1999 graduate of Cal State Fullerton, and his wife Bibi have a son (Dean) and a daughter (Leila).