Published: Thursday, August 1st, 2019 @ 6:06 pm
By: James G. Martin Center for Academic Renewal   ( More Entries )
Publisher's note: The James G. Martin Center for Academic Renewal is a nonprofit institute dedicated to improving higher education in North Carolina and the nation. Located in Raleigh, North Carolina, it has been an independent 501(c)(3) organization since 2003. It was known as the John W. Pope Center for Higher Education Policy until early January 2017.

Flagship universities such as the University of North Carolina at Chapel Hill and other public universities were created by their states primarily to support the higher educational needs of in-state students. 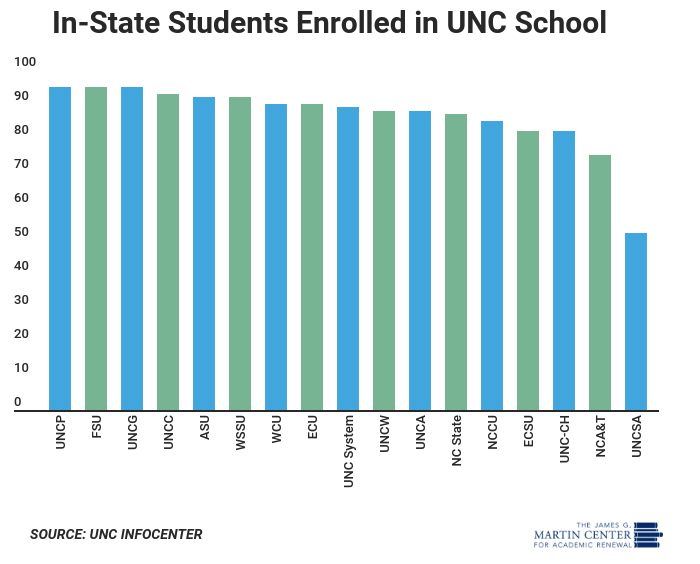 So how do UNC-Chapel Hill and other UNC schools stack up? Surprisingly well.

In-state students make up 82 percent of the UNC-Chapel Hill student body and 89 percent of all students within the UNC system. With the exception of UNC School of the Arts, UNC schools all maintain high levels of in-state enrollment, largely because of a 1986 UNC Board of Governors policy which capped out-of-state enrollment at no more than 18 percent of total enrollment. When North Carolina high school graduates apply to college this fall, they're likely to be surrounded by other local students.

David Waugh is a Martin Center intern. He is currently a student at Hampden-Sydney College, where he studies economics.