It may be weeks ⁠— perhaps months ⁠— before a three-judge panel issues a ruling on whether lawmakers drew N.C. voting districts legally, or whether the legislative districts are partisan gerrymanders. common cause v. lewis, supreme court, july 31, 2019
Home
Categories
Login 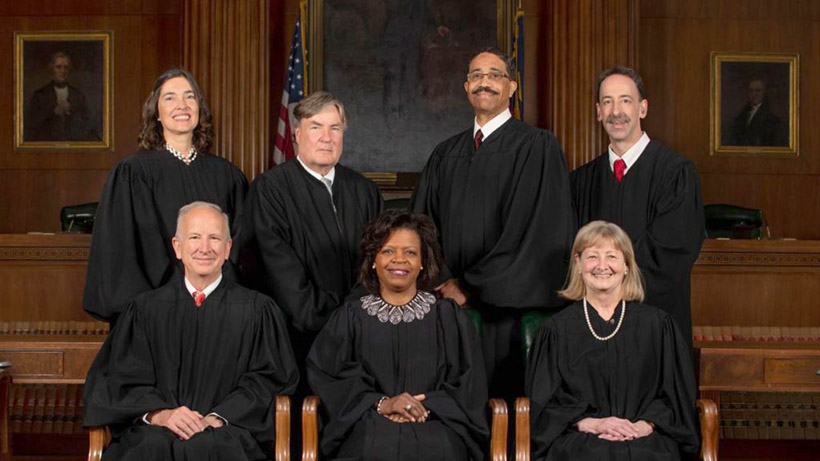 It may be weeks ⁠- perhaps months ⁠- before a three-judge panel issues a ruling on whether lawmakers drew N.C. voting districts legally, or whether the legislative districts are partisan gerrymanders.

The three-judge panel handling Common Cause v. Lewis at the trial level could obviously rule either way: for the defendants - who represent Republicans - or for the plaintiffs - who mainly represent Democrats. But in either scenario, the judges' ruling won't be the final word. The loser will appeal to the state Supreme Court, which holds 6-1 Democratic majority.

It's a near certainty, Wake Forest University professor John Dinan says, that the high court would rule the Republicans' maps an unconstitutional partisan gerrymander.

"At least three of the Democratic-backed judges on the State Supreme Court would have to join the lone Republican-backed colleague in declining to overturn the state's legislative maps, and I don't see where those three votes would come from among the six Democratic-backed judges on the court," Dinan, professor of politics and international affairs, says in an email.

Former N.C. Supreme Court Justice Bob Orr suggests watering the case down to politics may be unfair. Orr served as a justice on the 2002 Stephenson v. Bartlett redistricting case, which raised similar questions about the legality of partisan gerrymandering. Orr said the judges' political registration may have, in the end, rendered a different understanding of constitutional limitations, but they still have to explain their reasoning in a viable, logical way for other legal scholars.

"I think Stephenson was a good-government decision," Orr said. "It recognized whoever's in charge of the legislature can manipulate the drawing of districts and the requirements that limit the ability to do that, and the court has the authority to enforce those requirements."

The 2002 case shares similarities with the current one, except the roles are reversed: Back then, Republicans accused Democrats of skewing district lines to their favor.

It's often forgotten or ignored, but political blame goes both ways.

"This is the great irony," Orr said. "In 2002, Democrats were saying Republicans were the wide-eyed political activists. Now, Democrats are relying on what the Republicans wrote in 2002 in large part to support their case."

Several groups have proposed legislative alternatives to the current system, and Orr belongs to one of them - the bipartisan nonprofit North Carolinians for Redistricting Reform. The group, headed by former University of North Carolina System President Tom Ross, proposes a constitutional amendment to the state legislature that would attempt to minimize partisanship in drawing district lines. (John Locke Foundation Chairman John Hood is a member of the group's board.)

Specifically, the move would prevent the use of voter data, such as party registration, and would maintain traditional map-drawing guidelines. These rules include minimizing instances in which districts cross county lines, ensuring borders are contiguous, and keeping districts compact ⁠- that is, limiting them to shapes resembling circles and squares, as opposed to the lopsided salamander-like formations, which is where we get the word "gerrymander."

"Partisan gerrymandering isn't good government," Orr said. "I think the public is better served and both parties are better served if we had an independent redistricting process. or at least one that limits ability to cook the books in their favor."

Politics aside, Common Cause v. Lewis comes down to how judges interpret the state's constitution. They could say the sections mandating "free elections" and "equal protection of the laws" could be interpreted broadly or, as the Supreme Court ruled earlier this summer in Rucho v. Common Cause, the judges could rule the court has no jurisdiction in the matter, thus leaving it to the state.

"I could see it going either way," said Michael Bitzer, professor of politics and history at Catawba College. "'All elections shall be free' ⁠- what does that mean? If legislators decide to use partisanship in drawing the lines, are they considered to be free?"

Some constitutional experts echo defense witnesses, noting the court has no measure of how much partisanship is too much.

"They cannot assess the facts without having some standard to measure those facts by," said Greg Wallace, associate professor at Campbell School of Law. "You can't decide how long something is unless you've got a ruler."

It's unclear how the recently discovered and widely controversial Hofeller files will impact the judges' final ruling. Plaintiffs say the files, which include racial data charts, implicate the late Republican map-drawer Thomas Hofeller in racial gerrymandering, which is illegal under the U.S. Constitution.

But in Southern states it's often difficult to discern whether maps were gerrymandered along partisan or racial lines, Bitzer said. Black Southerners vote for Democrats 95 percent of the time; upward of 60 percent of white Southerners vote Republican.

If racial intent was truly evident from the Hofeller files, plaintiffs probably would have made it a more emotional issue, said David McLennan, professor of political science at Meredith College. The truth is, accusations of racial gerrymandering in North Carolina are decades old.

"Going back to 30 years of North Carolina lawsuits looked at in the courts, they tend to have been racially gerrymandering lawsuits," he said.

In a trial that lasted two weeks and ended Friday, the court ran out of time to hear closing statements. Briefs, which will lay out the sides' concluding summary arguments, are due Aug. 7.