Hylton-Pelaia to Represent Jamaica at Pan Am Games 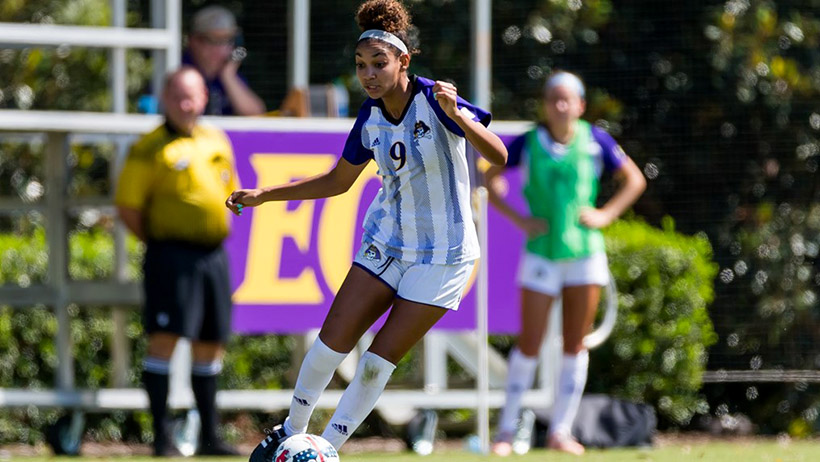 GREENVILLE, N.C.     Jayda Hylton-Pelaia of the ECU women's soccer team will get a taste of international competition this summer when she represents Jamaica at the Pan American Games in Peru.

"Being invited to the Pan Am Games as part of the Reggae Girlz squad is an honor," said Hylton-Pelaia. "I am extremely excited to represent Jamaica at this major sporting event."

Hylton-Pelaia has represented Jamaica at the youth levels, including with the U20 team at the 2018 CONCACAF Women's U20 Championship, as well as in friendly's. However, the Pan American Games will represent her first crack at an international competition at the senior level.

The Jamaican team will open play against Mexico on July 28 at 10 a.m. The Reggae Girlz will take on Colombia at 1 p.m., on July 31 before concluding the group stage against Paraguay at 10 a.m., on August 3. Should Jamaica finish in the top two of the group, the team will advance to the semifinals which will take place on August 6. All games will be played at the Estadio Universidad San Marcos in Lima, Peru.

Jamaica is coming off an appearance at the 2019 Women's World Cup in France, the first time the country had qualified for the tournament. The Reggae Girlz will try to continue their momentum later this year when they take part in qualifying for the 2020 Olympics in Tokyo, Japan.

Hylton-Pelaia has been a standout performer for the Pirates during all three of her seasons in Greenville, but she took her performances to another level in 2018. The Brampton, Ontario native set new career-highs by tallying eight points on two goals and four assists while also being named the AAC Defensive Player of the Week on two occasions. She was named to the All-AAC Second Team as well as to the All-Tournament Team for the league's postseason tournament. Hylton-Pelaia helped the Pirates storm to a 10-6-3 record and a place in the AAC Championship Semifinals during the 2018 campaign.