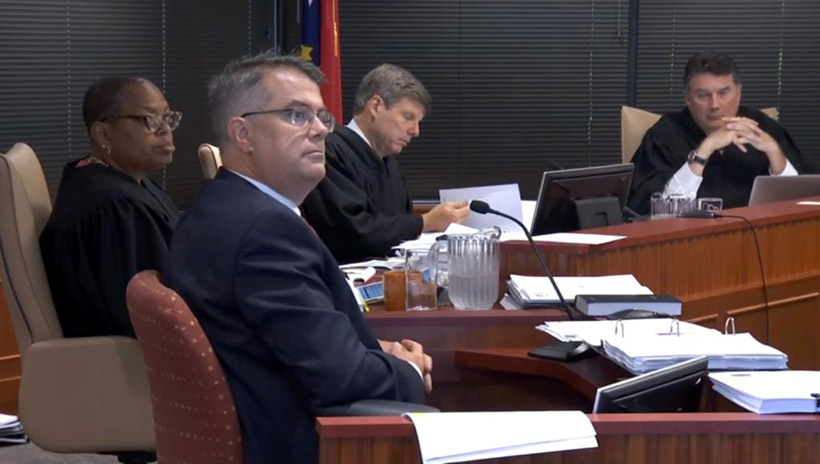 North Carolina's redistricting trial Common Cause v. Lewis concluded Friday with heightened tensions, a day after the court threw out part of the testimony of one of the General Assembly's key witnesses.

Discrediting the other side's witnesses became a main theme for plaintiffs and defendants as the two-week trial wound down. Plaintiffs asked the court to reject testimony from one of the legislative defendants' expert witnesses, Claremont McKenna College political scientist Douglas Johnson, after he admitted his numbers were incorrect. Defendants meanwhile criticized plaintiffs' witnesses for overlooking various factors that can influence map-drawing. They also rebutted accusations of racial bias, noting that Democrats have used racial data to draw earlier sets of maps.

Attorneys' post-trial briefs are due to the three-judge Superior Court panel Aug. 7. Beyond that, it's unclear how long it will take the judges - Democrats Alma Hinton and Paul Ridgeway, and Republican Joseph Crosswhite - to rule. Plaintiffs' attorneys said Friday if they win their case, Democrats will have time to draw new maps in time for the 2020 primaries.

An appeal to the state Supreme Court is expected no matter which side prevails.

Johnson's testimony - tossed by the court - regarded the controversial "Hofeller files." Two months before the trial began, attorneys obtained draft files created by in June 2017 Republican map-drawer Thomas Hofeller. The files included maps done months before the legislature adopted its map-making criteria later that year. Plaintiffs said 95% of the Senate drafts and 90% of the House drafts from Hofeller matched the enacted 2018 election plans, saying not much changed after the legislature adopted its criteria.

Johnson tried to refute criticism of the Hofeller files, saying the draft maps and enacted maps weren't as similar as plaintiffs claimed. But his calculations excluded 11 districts showing nearly 100% overlap between the two maps. Even after admitting the calculations were wrong, he emphasized that corrected numbers would lead to "a change in degrees, but not a change in conclusion."

Defense attorneys also questioned Bill Gilkeson, a Raleigh attorney and former General Assembly staffer. Gilkeson, who was called by the defense, tried to assert attorney-client privilege regarding redistricting work he had done with the state Democratic Party and the Southern Coalition for Social Justice, a 501(c)3 nonpartisan group that sued the General Assembly in earlier redistricting lawsuits. (SCSJ founder Anita Earls is a justice on the state Supreme Court.)

Gilkeson testified he also reviewed maps drawn for this lawsuit on behalf of Common Cause - one of the plaintiffs. He said Democratic lawmakers used racial and partisan data when drawing up replacement maps after the 2011 plans were ruled unconstitutional.

Republicans hammered this point home, as Hofeller was also accused by Democratic plaintiffs of using both racial and partisan data in drawing his own maps.

Thomas Brunell, a professor at the University of Texas at Dallas, tried to discredit the simulated maps of one of the plaintiffs' star witnesses, Jowei Chen, a University of Michigan political science professor. Brunell criticized Chen for relying too much on statistical modeling in his analysis of district maps. Brunell said Chen failed to include incumbency protection in his simulations, or consider many political factors that go into North Carolina's mapmaking rules, including requirements of equal population per district and not breaching county lines.

Brunell wrote "Redistricting and Representation," a book arguing voters would prefer elections that are less competitive and districts filled with more like-minded voters. He was the only defense witness to denounce partisan gerrymandering as harmful to the democratic process.

"I've been unequivocal about being against partisan gerrymandering," he said.

Testimony and arguments over evidence took the trial past 5 p.m. Friday. It ended without closing arguments from either side.

Plaintiffs' attorneys renewed their pleas for fairer representation in the legislature Friday afternoon at a news conference after the trial ended. Responding to courtroom questions, they asserted that even though the U.S. Constitution was silent about partisan gerrymandering, the state constitution would make the Republicans' maps illegal.

"The practice strikes at the very foundation of representative democracy," plaintiff attorney Stanton Jones said, "particularly in the most extreme form, as seen here."

Defense attorneys argued in their opening statements that since the U.S. Supreme Court has said partisan gerrymandering is an issue for the political branches of government rather than the courts, a challenge of these districts under the N.C. constitution isn't valid, either.