Twenty Retired Faculty Artists Will Be Featured in an Exhibit Opening Aug. 2 at ECU

Twenty retired faculty artists from East Carolina University will be featured in an exhibit opening Aug. 2 in Gray Gallery.

It is the second of three planned exhibits celebrating the 110th anniversary of art education at ECU. Last summer, the school hosted the "In Memoriam" exhibit featuring artwork from late faculty and university notables such as Francis Speight and Wellington B. Gray. Next year, an alumni showcase is planned.

"It's extremely important for our students to look back at the foundation of teaching and the art that was made by our retired faculty because they will better understand the esthetics which made the school the exemplified learning institution it was and continues to be," said Sue Luddeke, curator for the exhibit. "The instruction influenced the work of so many alumni who continue to practice art making." 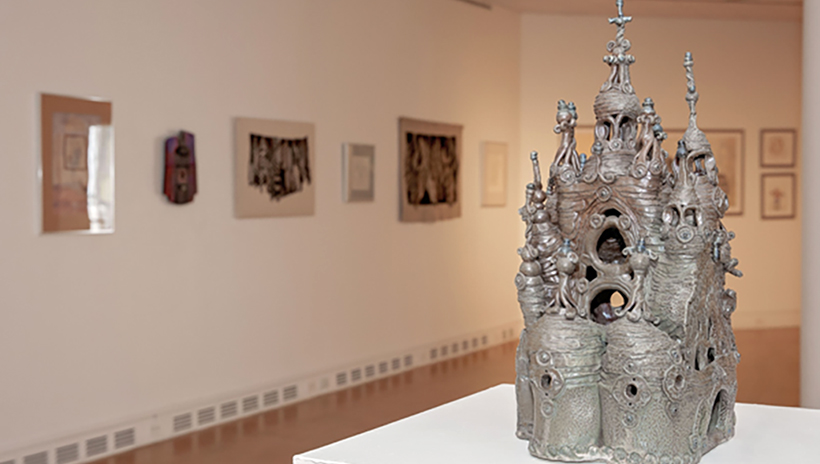 "We will try to honor them and show what's been passed on, what was taught here - the building blocks of this art department," said Luddeke, who arrived at ECU as a student in the 1970s. She earned a degree in painting and has taught in the School of Art and Design since the early 1990s.

One of the first things Luddeke said she saw when she walked through the art school doors was a sculpture, titled Sand Castle, by Chamberlain, which is in the exhibit.

Chamberlain - who joined the faculty in 1967 - taught ceramic design at ECU for 39 years.

"We taught many students, and we probably have close to 30 or 40 or more who have gone on to set up their own studios and made excellent livelihoods," he said. "We taught clay forming methods, clay and glaze technology and formulation, kiln building, and studio practices."

The ECU Ceramics Guild was the first student guild to host an annual holiday sale with profits going to off campus summer study stipends, such as Penland School, and visiting artists, he said.

Along with the Sand Castle - one in a series of about 40 Chamberlain created - he has three other pieces in the exhibit, which illustrate the various directions he worked in through the years. "All were made from a larger series of pieces so as to carry through on whatever creative theme I was pursuing at the time," he said.

There is a wheel-thrown fish vase, a flat wall mixed media piece, and a watercolor painted in the last class taught by then visiting artist-in-residence Ed Reep, who retired and relocated to California. Reep died in 2013.

"I believe this exhibition is important because it showcases not only professionalism, but how diverse our faculty colleagues are," Chamberlain said. "We have many stories to tell. And, I recall that when Gray Gallery was dedicated it was said metaphorically that it was our (ECU School of Art and Design) window to the world. And, as a window, you, the viewers can look in. It is another way that the school communicates its mission."

Chamberlain took Reep's class with Stanforth, who taught at ECU for more than 30 years. Stanforth was a painter, photographer and a lithographer. His art was shown at the N.C. Museum of Art, Greenville Museum of Art and in a retrospective show at The Imperial Centre for the Arts and Sciences in Rocky Mount.

Twarog, who was curator for the Sonic Plaza multimedia art installation outside Joyner Library, taught animation and interactive design at ECU. Primarily known for his 2D computer graphic work, he also was a talented watercolor and pencil artist and woodworker. Included in the exhibit is a 1989 painting of the Notre Dame Cathedral and a self-portrait.

An opening reception will be held Sept. 6 during Uptown Greenville's First Friday ArtWalk. The exhibition will be on display through the third week of September.