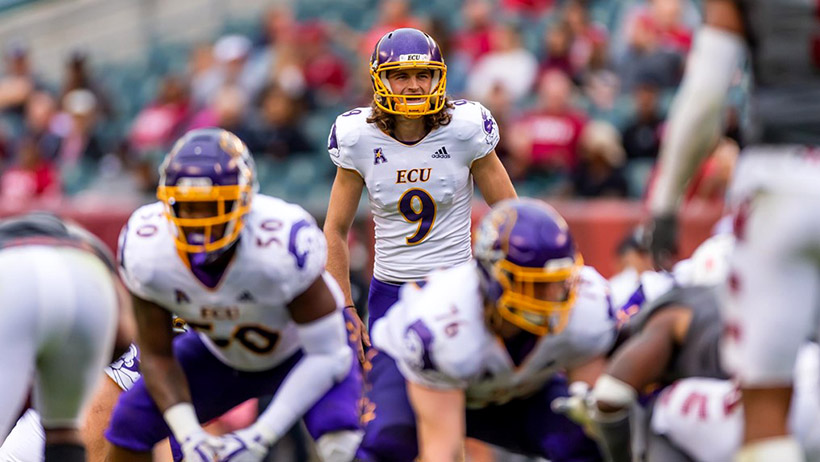 WEST PALM BEACH, Fla. — ECU junior kicker Jake Verity has been named to the 2019 Lou Groza Place-kicker Award Watch List, according to an announcement by the Palm Beach County Sports Commission Wednesday. The award recognizes the top collegiate placekicker and is named for National Football League Hall of Fame kicker Lou "The Toe" Groza, who played 21 seasons with the Cleveland Browns.

Verity, who has garnered Preseason First-Team All-American Athletic Conference honors by Athlons and Phil Steele's College Football Preview Magazine, is the third Pirate since 2011 to be named to the watch list joining Michael Barbour (2011) and Warren Harvey (2013).

A year ago, Verity was a First-Team All-AAC selection after leading The American in field goals made per game (1.58) and FG percentage (90.5, an ECU single-season record), while standing fifth in kick scoring (7.0 ppg). The Bremen, Ga. native ranked among the national leaders in FG percentage (fourth) and FGs made per game (12th) in 2018, while currently standing eighth in career FGs made per game (1.38) after making 36-of-48 attempts in three years. Verity, who connected on 27-of-28 PATs, successfully made 19-of-21 FGAs and tied his career-long with a 52-yarder against Memphis. In all, he made at least one field goal in 11 of 12 games (multiple seven times) and was also credited with a 38-yard game-winning kick versus Old Dominion, the first of his career.

Accomplishments are tabulated throughout the season and the Lou Groza Collegiate Place-Kicker Award will announce its 20 semifinalists on Thursday, Nov. 7th. From this list, a panel of more than 100 FBS head coaches, SIDs, media members, former Groza finalists, and current NFL kickers selects the top three finalists for the award, announced on Tuesday, Nov. 26th. That same group then selects the national winner, who will be announced on Thursday, Dec. 12th during the Home Depot College Football Awards Show on ESPN.

The 28th Annual Lou Groza Collegiate Place-Kicker Award, presented by the Orange Bowl, recognizes the three finalists during a celebration in Palm Beach County, culminating with a gala awards banquet at West Palm Beach's Kravis Center for the Performing Arts on Dec. 9th.