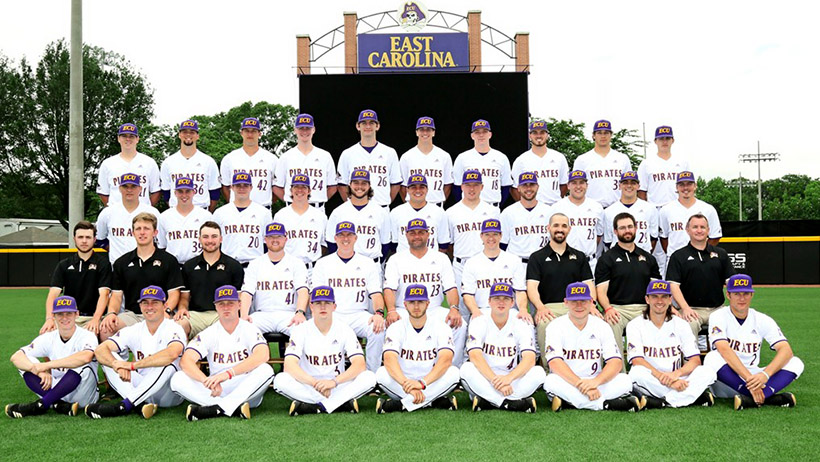 The Pirates, who sported a 3.448 GPA for the 2018-19 academic year, are one of five American Athletic Conference teams to be honored joining Cincinnati, Memphis, Tulane and Wichita State. ECU has registered a 3.05 or higher grade point average in nine of 10 semesters, including a spring semester-best 3.48 in 2019 besting the previous mark of 3.43 (2018). ECU's top semester GPA was recorded in the fall of 2017 when it posted a 3.52.

Under fifth-year head coach Cliff Godwin, a two-time Academic All-America selection, his teams have combined to have 240 members on the ECU Director of Athletics Honor Roll (3.0 or higher), while 66 Pirates have earned inclusion on The American All-Aca­demic Team maintaining a minimum 3.00 GPA.

Following the 2019 season, the Pirates earned their fourth-straight Team Academic Excellence Award (2016-19) from The American and the American Baseball Coaches Association (ABCA). For the second time in Godwin's tenure, the Pirates had a pair of players named Google Cloud CoSIDA Academic All-America honors with Jake Agnos (first-team) and Alec Burleson's (third-team) selections in 2019. Two years ago, Travis Watkins (first-team) and Charlie Yorgen (third-team) were named CoSIDA Academic All-American, while in 2018 Jake Agnos was an All-District 3 First-Team selection.

In the Fall of 2018, all 35 members of the club posted a 3.41 cumulative GPA with 36 earning ECU Director of Athletics Honor Roll accolades. In the spring, 29 members were named to the ECU Honor Roll while four in Burleson, Jake Kuchmaner, Evan Odum and Evan Voliva each registered a 4.0 GPA.