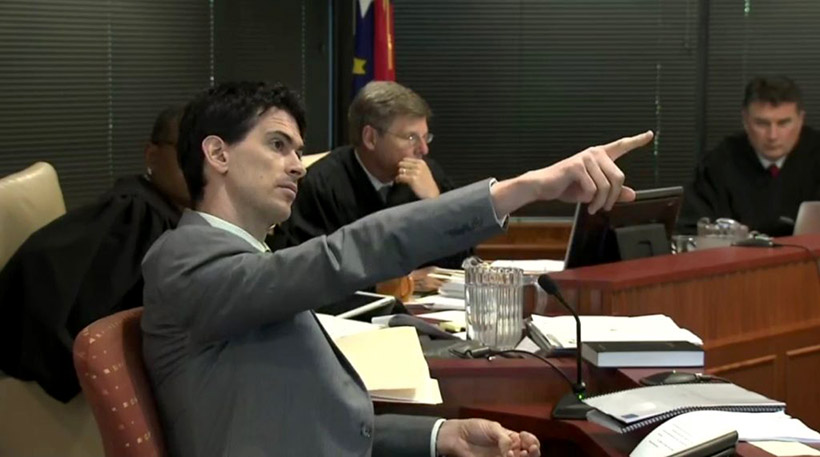 Before mounting a defense in the Common Cause v. Lewis partisan gerrymandering trial, one lawmaker has issued a news release hinting at arguments he and fellow defendants are likely to make.

"Dem 'Expert' Reports Are Sociological Gobbledygook," reads the headline of the release from Sen. Ralph Hise, R-Mitchell. Hise co-chairs the state Senate's redistricting committee. He is a named defendant in the case.

Hise takes aim at expert witnesses plaintiffs have put forward during more than one week of trial action before a three-judge Superior Court panel in Raleigh.

"For most of the last week of North Carolina's redistricting lawsuit, lawyers for the Democratic Party and Common Cause have bored the court with 'expert' testimony comprised of what U.S. Supreme Court Chief Justice John Roberts has called 'sociological gobbledygook.'" according to the Hise release.

Omitting that race, in which Republican Mike Causey unseated Democratic incumbent Wayne Goodwin, leads to an overinflated assessment of Democrats' statewide electoral performance in 2016, according to Hise's release.

As the Senate drew one of the maps on trial in Common Cause v. Lewis, Blue recommended Wake County district line changes accepted by the Republican Senate majority. "Blue testified that his districts 'cure the foundation on which one would probably bring a political gerrymander claim,'" according to Hise's release.

"Some of them even put Senator Blue in a Republican-dominated district - an outcome no legislature would ever support," according to Hise's release. "Why? Because actions by legislators are the product of compromise and conversation, not some computer algorithm."

Third, "plaintiffs' experts built their simulations using the wrong criteria," according to Hise. None of the plaintiffs' experts developed alternative maps that used the same criteria lawmakers used to draw the 2017 maps on trial.

At press time, plaintiffs still were presenting their case. It challenges state House and Senate election maps as examples of overly partisan gerrymandering. Legislative defendants are expected to make their counterargument as the trial continues this week.