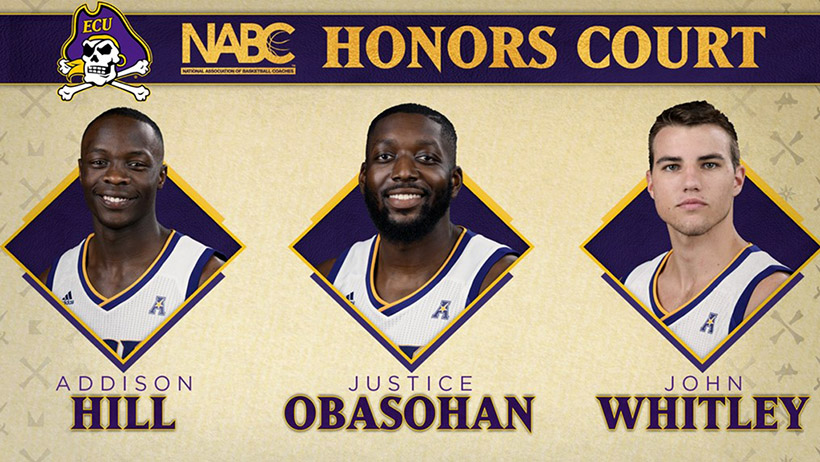 KANSAS CITY, MO — A trio of ECU men's basketball student-athletes were honored by the National Association of Basketball Coaches (NABC) as it released its 2018-19 NABC Honors Court.

Seniors Addison Hill and Justice Obasohan along with junior John Whitley were among the student-athletes from NCAA Division I, II and III a NAIA to be recognized for their excellence in the classroom. It was the second career Honors Court accolade for Obasohan, while Hill and Whitley were named to the list for the first time in their respective careers.

The three selections were the most of any American Athletic Conference institution and the highest total in school history.

The trio was among just six American Athletic Conference student-athletes to earn the honor, joining James Pyle of SMU and Tulsa's Alex Foree and Reggie Jones.

In order to be named to the Honors Court, a student-athlete must be a junior or senior academically on the varsity men's basketball team and have achieved at least a 3.2 cumulative grade point average at the conclusion of the 2018-19 academic year.

Each of the three aforementioned ECU student-athletes completed their undergraduate requirements and received his bachelor's degree in May.

A four-time American Athletic Conference All-Academic Team honoree, Obasohan earned his Bachelor of Science degree in public health studies, while playing 22 games this past season. Hill appeared in 25 contest and completed his requirements for a degree in applied sociology, while Whitley saw action 10 games and earned his bachelor's degree in business administration.