Most oceanographers would rather find themselves studying sardines instead of being packed like one, but East Carolina University assistant professor Rebecca Asch squeezed into the research vessel Kilo Moana last month for a training cruise off the coast of Hawaii with nearly two dozen researchers. Rebecca Ashe, assistant professor, training cruise, kilo moana, july 17, 2019
Home
Categories
Login

Most oceanographers would rather find themselves studying sardines instead of being packed like one, but East Carolina University assistant professor Rebecca Asch squeezed into the research vessel Kilo Moana last month for a training cruise off the coast of Hawaii with nearly two dozen researchers.

Asch, who was awarded a Sloan Research Fellowship last year, recently returned from the National Science Foundation and University-National Oceanographic Laboratory System's chief scientist training cruise. The training opportunity is designed to teach early-career scientists how to plan and write effective research cruise proposals, while also familiarizing them with the ship's equipment and crew.

The ship departed from Honolulu, Hawaii, on June 15 as part of Asch's 10-day excursion, traveling 60 miles north of the island of Oahu into the open ocean.

"I had two main goals heading into the cruise," Asch said. "First, I wanted to learn more about how researchers write grants and proposals for cruises. Second, I wanted to study specific fish and their interactions with the ocean's nutrient cycle. The cruise was hectic with nearly 23 researchers on board with their own sets of experiments and observations, but in the end we were able to work together and get more work done than we initially imagined." 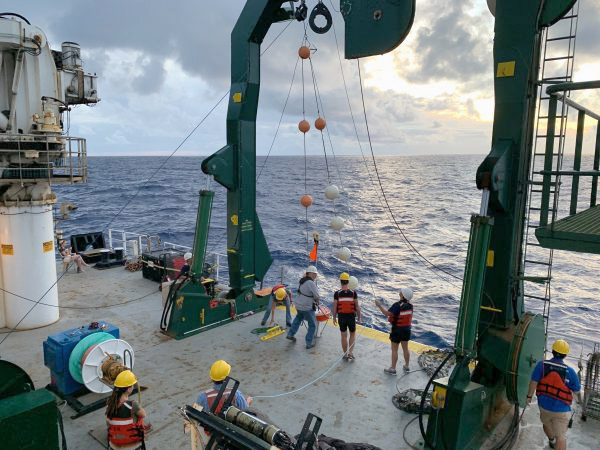 Scientists aboard the research vessel Kilo Moana take samples in the Pacific Ocean. While on the training cruise, Asch sampled fish at mid-ocean depths and will study how the fish cycle nutrients through different ocean layers. 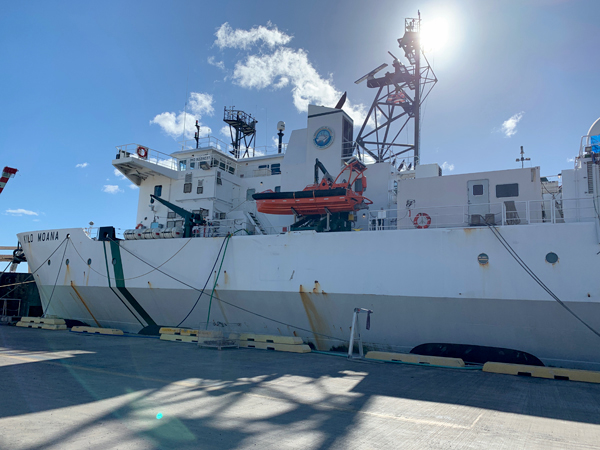 The research vessel Kilo Moana is owned by the U.S. Navy and is operated by the University of Hawaii Marine Center. Asch spent 10 days on the vessel as part of her training cruise.

The cruise provided an opportunity for Asch to bring back new knowledge for her Thomas Harriot College of Arts and Sciences colleagues and students at ECU. The cruise offered a valuable learning opportunity for her to understand the process of requesting research vessel ship time when writing project proposals. Asch said that seeing the sheer amount of coordination needed on research cruises was impressive, and in the future she hopes she can help match writers requesting cruises with vessels that fit their research needs.

"I hope it will be helpful to other faculty members and especially our students," Asch said. "There are often work or volunteer opportunities on these research vessels, and it would be great if our students could get connected and be a part of these cruises."

The cruise also provided Asch an opportunity to collect fish samples at the ocean's mid-depth regions. Past research work at the cruise station has focused on aquatic life lower on the food chain, including plankton. However, Asch is interested in fish that eat that plankton, but live a few hundred feet below the surface.

"We collected fish from 10 different depths - nearly 500 fish in total," Asch said. "They'll be shipped back to campus next month. We'll then dissect the fish, examine the food they're eating at different depths, and learn more about the role these fish play in transporting nutrients."

Asch's team will investigate the role mid-depth fish play in moving nutrients from the surface to lower ocean depths by examining their stomach contents. By investigating the nutrients these fish are transporting through different ocean depths - including carbon and nitrogen - scientists can better understand how organisms affect environmental processes.

"A few research papers have suggested that these mid-depth fish are up to 10 times more abundant than we previously believed," Asch said. "This could play a large role in carbon cycling because the ocean takes a lot of carbon dioxide out of the atmosphere. If these fish are helping carbon reach the deeper depths of the ocean, it could remove that carbon from the greenhouse gas cycle for several hundreds of years."

Even with all of the time consuming scientific work, the trip wasn't all just sample collecting and data crunching for Asch and her colleagues.

"We really got to see some pretty cool marine life like the pygmy killer whale and the whale shark," she said.

Asch's trip has been part of a busy year for Pirate researchers around the globe. Earlier this spring, ECU hydrogeologist Alex Manda received a Fulbright U.S. Scholar Award to assist in water quality testing in Zambia, while science education professor Dan Dickerson traveled to the Arctic to deploy data collection sensors to gather information to study climate change.