Can Higher Property Taxes in Orange County Save the Planet? | Beaufort County Now

Can Higher Property Taxes in Orange County Save the Planet?

Before delving into the details, let's take a look at the big picture. Orange County, North Carolina, occupies 401 square miles. The globe whose climate this tax increase is intended to affect occupies 196,900,000 square miles.

The implied rationale for the tax increase is provided in a quotation from The Guardian (U.K.) in an article entitled "We have 12 years to limit climate change catastrophe, warns UN." Another reason could be that, "As a signatory to the Global Covenant of Mayors, the County is expected to produce a Climate Action Plan within the next 2 years."

•  Up to $100,000 to devise the "Climate Action Plan" that would "provide robust information to inform the County's transition to renewable energy and other GHG emission reduction activities"

•  Install rooftop solar on county buildings (estimates from 2017 for three buildings come in at over $820,000)

•  Hire third parties to analyze, recommend, and upfit existing county buildings with "adjustments needed to restore the building's [energy] performance to its original performance or better" (estimated cost of $0.75 to $2.00 per square foot)

So, are these the policies in a 401-square-mile area that is keeping the world from narrowly averting catastrophe? Would they do anything to move the climate needle at all?

For that matter, is there anything Orange County could do to influence the world's climate, with or without resorting to higher taxes? Do the math; the answer is a clear no.

The costs of it will have impacts, though. It will make it a little more expensive to live in the county.

And what will taxpayers be buying? Nothing. But county leaders being able to say we have a plan to mitigate climate change.

Is Orange County an enemy to the planet's climate? That, too, is a no.

To the extent that emissions are responsible for climate change, recall that Orange County is part of North Carolina, a state whose emissions from energy generation have fallen - dramatically - all century long.

As part of North Carolina, Orange County is also part of the United States, the nation leading the world in reducing emissions:

In 2017, the U.S. reduced its carbon dioxide emissions by 42 million tons, the biggest reduction among the nations.

It was the third year in a row the U.S. had the largest decline in emissions in the world - and the ninth time this century. 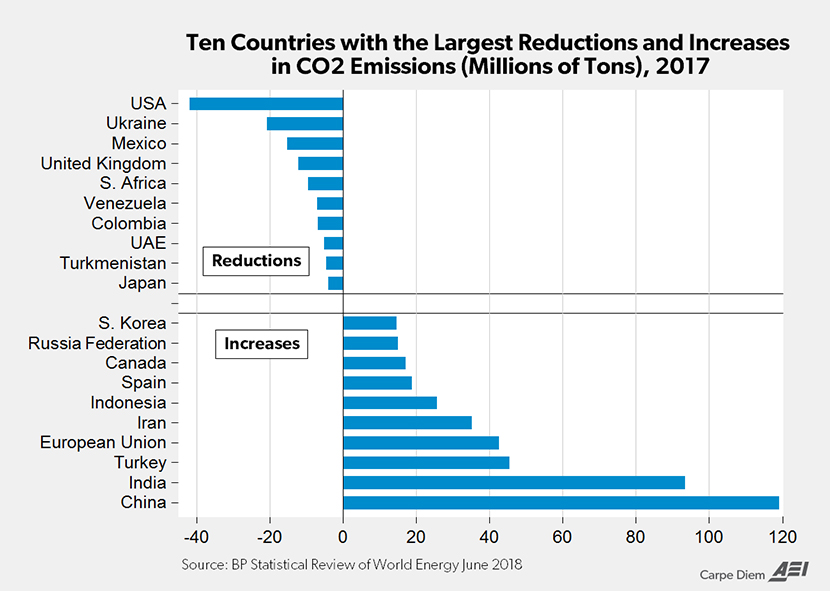 The real problem is that all the climate good Orange County is already doing is being obliterated in minutes by the emissions fuming forth from the likes of China, India, Turkey, the European Union, and others.

Orange County leaders stand a better chance of producing some climate impact by sending strongly worded missives to China, India, Turkey, the European Union et al. telling them to get their acts together. Plus, it shouldn't require higher property taxes to do that.