If you can’t get a law, then go to court. redistricting, trial, court's role, common cause v. lewis, july 16, 2019
Home
Categories
Login 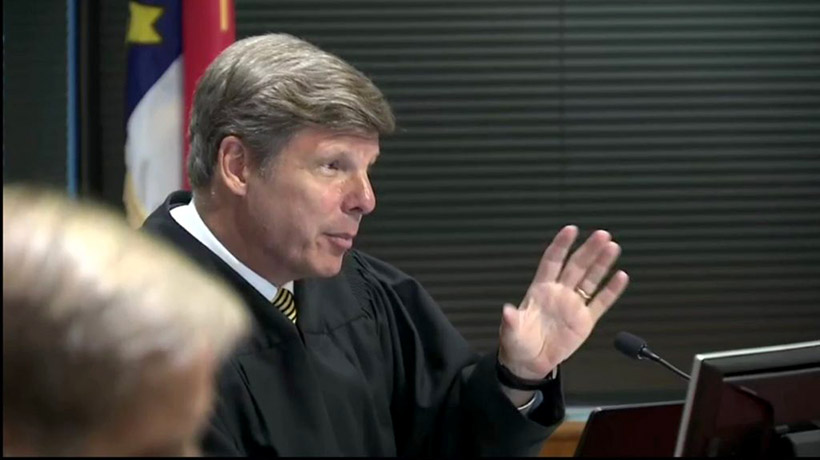 If you can't get a law, then go to court.

Such was the theme of opening testimony for Common Cause v. Lewis, the partisan redistricting lawsuit launched last year by Common Cause NC, the N.C. Democratic Party, and a handful of individual plaintiffs. Republicans violated the state constitution by carving out voting districts to their advantage, disenfranchising voters, plaintiffs say. GOP lawmakers deny any legal wrongdoing.

North Carolina needs redistricting reform, said Bob Phillips, executive director of Common Cause NC, during his July 15 testimony. Since legislators on both sides so far have refused to stop misusing power, the organization had no choice but to sue, he said.

But redistricting is a legislative issue, and therefore should be dealt with by lawmakers, not courts, said Phillip Strach, an attorney for the defense. An organization can't sue the General Assembly simply because legislators refuse to pass a law the group wants, he said.

The plaintiffs passionately contested those arguments. The legislature never will fix redistricting politics, Phillips said, and therefore courts must act.

The case is about how lawmakers - both Republican and Democrat - abuse power to stay in power, said Stanton Jones, an attorney for the plaintiffs.

"This is fundamentally unfair. It doesn't matter which party does it. It's wrong," Jones said.

The ruling left cases like Common Cause v. Lewis to state courts. Republican maps violate the state constitution, which provides greater equal protection than the U.S. Constitution, and the courts must uphold the law, plaintiffs say. But Republican legislators argue maps were drawn constitutionally, following laws about district borders, grouping of residents, and minority voting power.

As long as maps are legal, courts have no business telling the General Assembly how much partisanship is too much when states draw legislative and congressional districts, lawmakers say.

After Phillips' appearance, the rest of the day was taken up with testimony from Senate Democratic leader Dan Blue of Wake County and Rep. Graig Meyer, D-Orange, who led the N.C. Democratic Party's legislative candidate recruitment and fundraising during the 2018 campaign. UNC Wilmington Professor Derrick Miller, one of the individual plaintiffs in the case, also testified. Miller, an activist and Democratic voter, told defense attorneys partisan gerrymandering has blocked fair representation for his district. Sen. Bill Rabon, R-Brunswick, holds the District 8 seat. Miller is represented in the House by Rep. Deb Butler, D-New Hanover, who serves as House Democratic whip, defense attorneys said.