ECU officials and representatives from the design and construction firms responsible for the Life Sciences and Biotechnology Building break ground on the $90 million project. | Photos: Cliff Hollis

The East Carolina University Board of Trustees swore in five new members and elected officers during its regular meeting Friday morning. It also approved the sale of alcohol in athletic facilities and broke ground on the ECU Life Sciences and Biotechnology Building.

Robert Moore Jr. of Winterville and Thomas Segrave of Kinston were appointed to the board by the N.C. General Assembly, replacing outgoing members Kieran Shanahan and Edwin Clark. Also joining the board were Angela Moss of Chapel Hill, Thomas Furr of Durham and Phillip Lewis of Greenville, who were appointed by the UNC Board of Governors. Leigh Fanning was appointed to a second term by the BOG.

The new BOG appointees will fill the seats of Deborah Davis, Mark Copeland and Kel Normann. Colin Johnson, ECU's student body president, was sworn in as an ex officio member of the board. Sara Beth Fulford Rhodes, clerk of court for Pitt County, conducted the swearing-in ceremony.

Davenport, a resident of Wake Forest, is a partner at NovaQuest Private Equity, a Raleigh-based health care investment firm. He earned his bachelor's and master's degrees in business administration at ECU. He has served on the ECU Board of Trustees since 2013 and was previously a member of the ECU Board of Visitors.

"We have a ton of work to do, and it will take all of our collective energies and efforts to be successful in our service to this great institution that we love, and I'm ready to get started," Davenport said.

During the meeting, the board approved a resolution authorizing the sale of alcoholic beverages at athletic events, which was recently authorized by the N.C. General Assembly and the governor.

Jon Gilbert, ECU athletic director, said the athletic department's plan is to allow the sale of beer and wine in athletic venues and within 500 feet of those venues. Nine out of 12 institutions in the American Athletic Conference allow the sale of alcohol in their football stadiums; ECU will become the 10th.

"We think it will enhance our game day experience for those who choose to participate," Gilbert said. "We also think it will increase revenue."

Gilbert said his staff has consulted with a variety of university and community groups and stakeholders, as well as other institutions within the UNC System, and that the promotion of responsible consumption will be a priority. There will be a limit of one alcoholic beverage per person per transaction, and the sale of alcohol to visibly intoxicated individuals is prohibited. Sales of alcohol will not be permitted after the third quarter during football games. 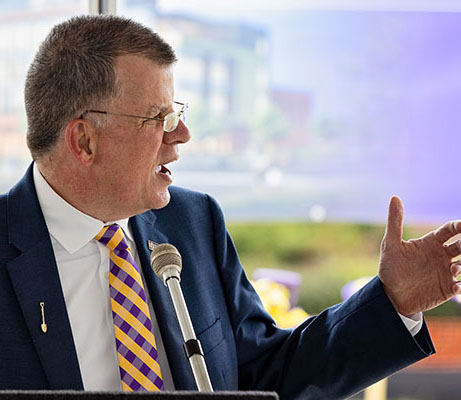 "We will not jeopardize the safety of our students or the fan experience," Gerlach said.

Following a break for lunch, the board members attended a groundbreaking ceremony for the ECU Life Sciences and Biotechnology Building, a 141,500-square-foot facility located at the corner of 10th and Evans streets in Greenville. The $90 million project was funded by the N.C. Connect bond referendum passed by the state's voters in 2016.

The four-story building is envisioned as a gateway to ECU and eastern North Carolina, bringing together interdisciplinary researchers with interests and expertise in biotechnology, bioprocessing, biophysics, biofuels, imaging and sensor development, and environmental engineering. It will provide a dynamic environment where industry and community partners can engage with university faculty and students, and access university resources to address problems, develop innovative solutions and make strategic decisions for future growth and development in the region.

Provost Ron Mitchelson pointed out the nearby intersection of two major roadways and drew a comparison to the interdisciplinary nature of the facility.

"I've been through this intersection twice a day for 20 years and have seen my share of collisions," Mitchelson said. "But not all collisions are bad. Our new building is a space designed for collisions. We want those scientists and engineers to collide on a daily basis, because that's where good accidents happen. ... Those collisions will be good not only for our students, but for our region as well."


The next regular meeting of the ECU BOT is scheduled for Sept. 12-13.