The stern post of the Queen Anne’s Revenge is raised from the bottom of the ocean in 2007. It is in the process of being preserved and examined at ECU’s West Research Campus. | Photos: N.C. Department of Natural and Cultural Resources

East Carolina University engineering students faced a daunting task. They had to come up with a way to flip a 1,600-pound piece of wood.

But this was no ordinary piece of wood. It is the stern post from the pirate Blackbeard's ship, the Queen Anne's Revenge (QAR), and it had been sitting on the bottom of the ocean for nearly 300 years.

"It is an extremely precious artifact for us," said Kim Kenyon, QAR conservator with the N.C. Department of Natural and Cultural Resources at ECU's West Research Campus outside Greenville.

The stern post that was pulled up from the wreck site in 2007 is one of the few intact wooden pieces from the ship. Kenyon said wood doesn't do well in the warm waters off North Carolina's coast where the ship's wreckage was discovered in 1996. On top of that, the location of the wreck near the turbulent Beaufort Inlet as well as wood-boring teredo worms that live in the ocean likely caused more degradation to the piece.

"The wood is highly degraded and very soft in places," Kenyon said.

Kenyon said as conservators try to preserve the artifact, they also study it to learn more about the ship, its construction and perhaps the people who built and sailed it before it went to the bottom of the ocean in 1718.

But they've been able to see only one side of it as it sits in a preservation solution in a tank at the research lab. Kenyon said conservators wanted to flip the stern post to see the other side but weren't sure exactly how to do that with such an important yet delicate artifact.

They contacted the ECU College of Engineering and Technology for a solution, and a capstone project came to life for five seniors - Christian Dowell, Thomas Gryb, Shawn Harbin, James Jaruseski and Edwin Sifuentes.

"That team of five guys was fantastic," said instructor Jeff Foeller, faculty advisor on the project. "I had them all in class before, and I knew when I saw their names as being part of the team that we would have a good year." 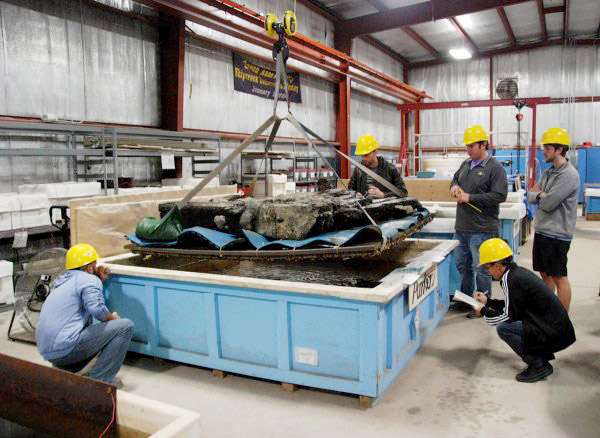 ECU engineering students look over the stern post from the pirate Blackbeard’s ship the Queen Anne’s Revenge. The students did a capstone project that determined flipping the stern post to examine the other side would cause potential damage to the artifact.
The students researched similar shipwreck restoration projects, interviewed authorities on the subject, created a 3D model of the artifact and brainstormed possible solutions.

"This project was great all the way around for me," said Dowell, who graduated in May with a degree in engineering and currently works as a manufacturing engineer with Hyster-Hale Group in Greenville. "It really gives you an opportunity to see how all of your schooling prepares you for actual engineering problems. We are trained to think like engineers and take principles we've learned and use that to solve real world problems."

While doing the work, the team realized the significance of working on something so historically important.

"That is a big part of eastern North Carolina, and Blackbeard is part of the claim to fame of North Carolina, so working on artifacts from Queen Anne's Revenge has some definite prestige," Foeller said. "There's a wow factor of, 'hey, this is Blackbeard's ship.' It's kind of cool."

Dowell, the son of a history teacher, described himself as a "history buff."

"I think that my favorite part of this project was the historical significance of the task we were assigned," said Dowell. "... We were the first people to be hands-on with such a significant a piece of history. We got to literally handle a 300-year-old part of history in order to help the conservators at the QAR lab learn more about this infamous ship."

After months of examination, the students came to a conclusion about flipping the artifact: Don't do it.

"They could not predict the artifact's safety, and you don't want to destroy something that is a one-of-a-kind thing," Foeller said.

For the QAR conservators, it may not have been the news they wanted, but they valued the information about the precious piece.

"Sometimes as an engineer you do have to deliver bad news, so that was some good practice for them I'm sure," Kenyon said.

The students, despite designing an apparatus that could flip the stern post, determined that the piece was simply too fragile to try it.

"When you are given a task, it is difficult when you determine you cannot complete it given certain constraints, and sometimes you have to give the client bad news, and no one ever wants to have to do that," said Dowell, who lives in the Craven County community of Ernul. "We were disappointed that we could not complete the rotation but confident in our analysis showing why it could not be done." 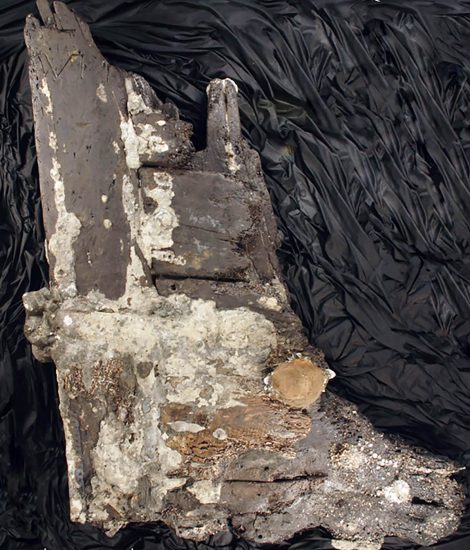 The stern post of the Queen Anne’s Revenge.
The 82-page report the student team generated on the project details options for the piece, such as attempting to flip the stern post while it is still submerged, which would better preserve the wood. QAR conservators continue to work on the issue.

"The team, we're really proud of them," Kenyon said. "They worked very hard this last year to come up with a number of solutions for us."

Kenyon said the project was the fourth or fifth in which ECU engineering students have helped QAR conservators. A previous group created a table to help bore out the interiors of cannons of concretion that had formed on the iron after sitting in the water for nearly 300 years. The table helps eliminate possible damage to the cannon from the drill.

"It's really changed our process. It makes it a lot easier for us to get going on boring out all of that concretion," Kenyon said.

Along those lines, the next QAR project for engineering students will be to design a better way to unload the cannons. Kenyon explained that of the 24 cannons recovered from the site so far, many are still loaded with either cannonballs, scrap iron or bolts that were used for ammunition. Conservators want to preserve these items as well.

As for the stern post, Kenyon said the next step is to continue desalination and to build up the cellulose within the wood so it does not collapse when it is eventually dried for future display - a lengthy process she said considering it was in the ocean for nearly 300 years.

Meanwhile, some of the 400,000 artifacts recovered from the site are on display at the N.C. Maritime Museum in Beaufort or on loan to other institutions.

Those wishing to tour the QAR lab can do so on the first Tuesday of each month. Tours are scheduled for 10 a.m. and 2 p.m., but registration is required and can be done online at www.qaronline.org.