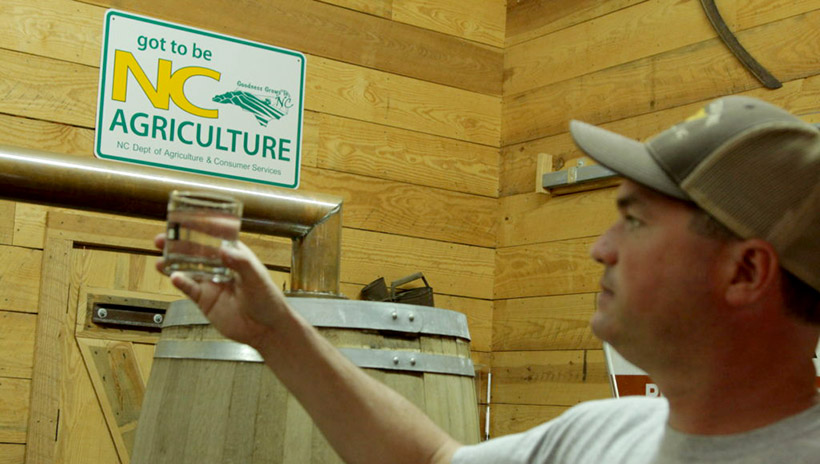 Jeremy Norris, owner of Broadslab Distillery in Benson, built the still for the distillery, which he started after learning the craft from his grandfather. | Photo: N.C. Department of Agriculture

A new version of S.B. 290 on Wednesday, July 10, passed the House Rules Committee. Sen. Rick Gunn, R-Alamance, announced in the meeting the bill had been combined with House Bill 536, which cleared the N.C. House, 91-24, on Tuesday.

The revised S.B. 290 passed on the House floor later Wednesday, 91-21, but an objection on third reading forced it to Thursday's calendar for final vote.

H.B. 536, sponsored by Rep. Chuck McGrady, R-Henderson, and now part of S.B. 290, will allow brewers to offer tastings at farmers markets and removes a limitation on sales at the state's craft distilleries. The bill allows restaurants and other venues to sell up to two drinks per customer at any one time, and would allow liquor tastings at state ABC stores, from 1 to 7 p.m., for three hours, with no more than three tastings per week.

S.B. 290, as it is now, would allow N.C. distilleries to sell malt beverages and unfortified and fortified wine, as well to sell mixed beverages. The bill would allow distillers to, much like ABC stores, sell to consumers without facing the current five-bottle-per-person annual restriction.

After the final House vote, the combined bill goes to the Senate for concurrence, and presumably, to Gov. Roy Cooper for his signature.