Neurodegenerative diseases - such as Alzheimer's, Parkinson's and ALS - are a leading cause of morbidity and mortality among older adults.

The risk of these diseases is reduced by intake of the omega-3 fatty acid, docosahexaenoic acid (DHA), which is mainly in fish and fish oils. However, not much is known about exactly how DHA gets to the brain in order to be effective, and why the intake of the fatty acid is more beneficial for some people than others.

A recent research breakthrough by an East Carolina University researcher discovered that a specific enzyme - Acyl-CoA synthetase 6 (Acsl6) - is critical for enriching DHA in the brain. 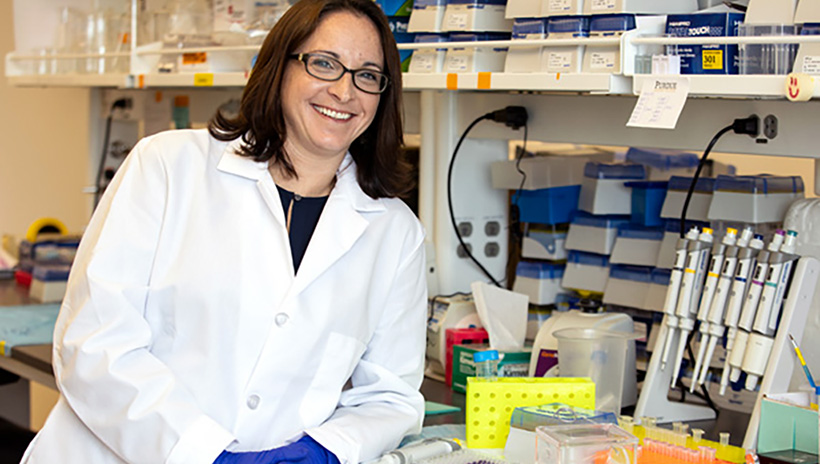 "We set out targeting this enzyme, hoping to land where we actually landed." said Dr. Jessica Ellis, an assistant professor in the Department of Physiology at ECU's Brody School of Medicine.

"Then we were like, 'OK this is it, this is it, we found it! This is one of the main missing components!'" added Ellis, whose research was assisted by ECU doctoral student Regina Fernandez.

The discovery - which was published by the Proceedings of the National Academy of Sciences journal in December - provides critical insight into brain DHA metabolism that could have broad health implications.

"We've shown that the animals that lack this enzyme have various motor-related impairments, they have impairments in memory and learning, and that they develop pathology in their brain over time which is indicative of early onset aging," said Ellis, who conducts her research out of the East Carolina Diabetes and Obesity Institute at ECU. "It seems DHA is critical for numerous biological functions within the brain that allow us to move properly, remember well and essentially age well."

The Dementia Alliance of North Carolina awarded Ellis a $100,000 grant in June to further her research into the fatty acid to better understand its role in dementia.

"There is a lot of correlation between dietary consumptions of fish or fish oil supplements and reducing the risk of Alzheimer's or other disorders that have a dementia component in them. But it's not really understood what that connection is," Ellis said. "We're proposing to take our model where we have less DHA and indicators of memory impairment to better understand the molecular mechanisms that are causing that and that can facilitate drug targeting, therapeutic targeting to try to prevent or alleviate dementia in human population."

Even though the potential cognitive benefits of fish oils have been known for some time, little was known about why or how it was effective for some people and not for others. Ellis attributed this limited understanding to how difficult it is to work with the fat metabolism in the brain.

"It really wasn't clear how the fatty acid was getting to the brain. All of these people are taking these supplements, but it's not always super effective," she said. "Because there's a lot of things that have to happen between our mouth and our brain, one of the things we were interested in understanding was what are the critical enzymes that allow that fat to get into the brain. So we discovered one of them and it's responsible for about 50 percent of the DHA that's in the brain, which is a lot."

Ellis, who was awarded the 2019 Lina Mae Edwards Young Investigator Research Award from the Dementia Alliance of North Carolina for her research, said being on the other side of a breakthrough such as this is "great, but also overwhelming."