The new Student Government Association (SGA) officers of East Carolina University are focused on advocacy for all students for the upcoming 2019-2020 school year.

Student Body President Colin Johnson and Vice President Taylor Chappell prioritized the success of students during their campaigns this past spring. 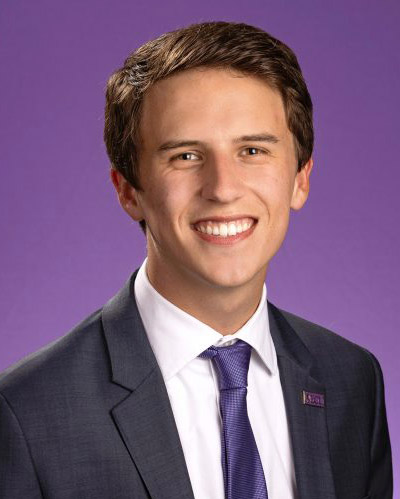 SGA president Colin Johnson
To help students achieve that success, Johnson said the officers plan to implement a textbook cost transparency program, which will help make textbooks more affordable and accessible as students register for their respective courses. The SGA is also working on a grant program for students who earn academic credits or work off campus through internships.

"We've been thinking about the best way to support our students with their internships so we can prepare them for the workforce," Johnson said.

In addition to serving as ECU's student body president, Johnson will be sworn in as an ex-officio member to the Board of Trustees on July 12.

"That's the greatest responsibility of this job as SGA president, to be on the Board of Trustees. I'm looking forward to working with the board to focus on a number of initiatives and to make sure that students are the main focus of everything we do," Johnson said.

Chappell said her goal for the upcoming school year is to assist Johnson and provide a strong support system for SGA representatives and for the student body. Chappell also wants to create a more inclusive campus community.

"My greatest hope for this year is to be true to the values our university was founded upon, to be undaunted during difficult times, and to always embody the spirit of being a Pirate," Chappell said.

Along with Johnson and Chappell, other SGA officers are Secretary Noah Shuler, Speaker of the Assembly Morgan Estes, Treasurer Morgan Fried and Attorney General Mariama Ibrahim.

Estes said her goal is to unite everyone on campus from the student government to the student body and make sure that the SGA is hearing what the students have to say.

"I want the student body to know that we are here for them and all that we do is to help make that connection," Estes said.

Fried is launching a "Use It or Lose It" system, which combines the funds of the SGA committees and gives them a budget for each semester. The funds are obtained from student fees. Fried said he feels this will help ensure that the money is being used for more events for students.

"If all the money isn't used in a semester, then the remaining money will be put into my committee, which is the Funding and Appropriations committee, and we basically give money back to the student population for things such as hosting events," Fried said.

Shuler said his goal is to ensure that the information and documents produced by the SGA is accessible by students.

Ibrahim said her personal goal is to crack down on the retention issue in the assembly and make sure that the SGA is seen and heard.

"Some students have reached out to me and are concerned that we aren't being seen so we really want to push SGA as a whole this year and let the students know that we support them," Ibrahim said.

Other initiatives include a platform for mental health wellness called the U at ECU, a redesigned website and Club Shipmates, a program that allows first-year and transfer students to attend SGA meetings and join in on discussions.

"We're going to be doing things that students care about, and we want to be present and make a difference," Johnson said.