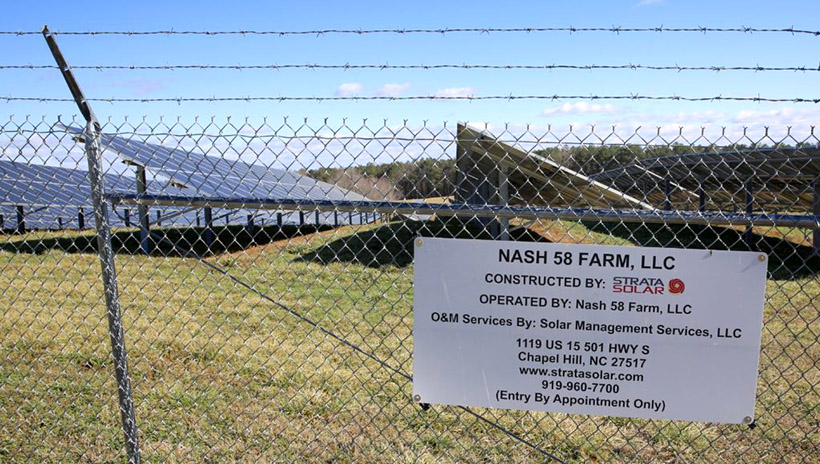 A ground-level photo of the land housing a solar farm from which Gov. Roy Cooper and his brother, Judge Pell Cooper, received lease payments for most of 2013 and 2014. | Photo: Don Carrington

Meredith Cooper, Gov. Roy Cooper's sister-in-law, has been listed since April as manager of the company that owns the Cooper family's Nash County solar farm property. That's when Meredith filed an annual report with the N.C. Secretary of State.

Meredith Cooper's husband is Pell Cooper, a District Court judge. Pell and Roy Cooper are brothers. This is the fourth ownership arrangement since 2012 of a 40-acre site in Nash County where a 5-megawatt solar farm leased to Durham-based Strata Solar LLC resides.

The most recent change in management appears to bring the company's owners - Pell and Meredith - in compliance with a December 2018 opinion from the state's Judicial Standards Commission dealing with a judge's role in managing real estate investments. The opinion was issued six months after Carolina Journal questioned whether Pell Cooper's role as manager of a company with solar interests potentially violated judicial ethics.

In June 2018, CJ reported that Pell was listed as manager of Will Clark Properties. He refused to speak with CJ about his role with the company. He did contact the Rocky Mount Telegram and said his role was appropriate.

"It is a real estate investment that is solely owned by me, and the land is leased to a solar company," Cooper told the newspaper. "Limited liability companies are common in real estate holdings, and this is in compliance with the North Carolina Code of Judicial Conduct."

But, the opinion added, the code requires a judge to "refrain from financial and business dealings that reflect adversely on the judge's impartiality, interfere with the proper performance of the judge's judicial duties, exploit the judge's judicial position or involve the judge in frequent transactions with lawyers or persons likely to come before the court on which the judge serves."

The opinion then states judges should not serve as managers when practicable: "Based on these restrictions, a judge should not voluntarily serve as a manager of a LLC formed to manage the judge's real estate investments if other members are available who could otherwise serve in that role, and a judge should avoid that role when practicable in order to ensure that serving as a manager does not create the appearance of exploiting the judge's judicial position or unnecessarily adding business obligations where other members of the LLC could easily undertake those same duties."

After the ruling was issued, the LLC's manager switched from Pell to Meredith.

Roy and Pell acquired the land in 1996 from their father.

In 2013 and 2014 annual business filings with the N.C. Secretary of State, both Roy and Pell Cooper were listed as managers of Will Clark Properties. From 2015 through 2018, Pell Cooper was listed as the only manager of the company. In a 2015 economic interest statement, Roy Cooper - then the state's attorney general - stated he had no interest in Will Clark Properties as of November 2014.

Roy Cooper has not answered questions from CJ about his ownership interest in Will Clark Properties or the income stream from Strata Solar.

CJ reached out to Pell Cooper to ask about changes in the ownership and management of the solar property. He didn't respond to an email or a message left with his office staff.

The News & Observer reported in March that a Cooper spokesman "did not respond to a question about whether the governor and/or his family members still receive regular rent payments from Strata."

Property records show the Cooper brothers own individually, or through LLCs, at least 25 properties totaling more than 500 acres in Nash County.

Based on solar industry standards, the lease, renewable for two five-year terms, may be worth as much as $1.68 million. CJ hasn't been able to determine exactly who receives the lease payments. Cooper is a strong advocate of solar energy and in 2017 Strata Solar's CEO asked Cooper for help in a dispute with Duke Energy, as first reported by WBTV in Charlotte.

The Nash County Tax Office lists Will Clark Properties' mailing address as P.O. Box 12181, Raleigh, NC, 27605, located at the Cameron Village Post Office. It is the same address Gov. Cooper has used in the past. Pell and Meredith Cooper live in Rocky Mount.