An occupational license is a special kind of government regulation known as an entry regulation. The state forbids a would-be worker from entering his chosen field of work until he gets a license from the state board governing that occupation. Legally, he can't start work without it.

Barring entry is what makes occupational licensing the most extreme, restrictive regulation over a lawful job. Other forms of government regulation of occupations still uphold a person's right to earn a living and protect competition. They don't preclude a person from starting work.

Especially in North Carolina, licensing ought to be the regulation of last resort.

Shutting the door on second chances

The costs of these entry regulations have a disproportionately worse impact on the poor - not just would-be workers, but also poor consumers and low-income communities. They also have an especially bad impact on people with conviction records.

Not only do license boards in North Carolina impose costly burdens on workers in general, but also they make it very difficult for people with conviction records to get jobs in their field. Licensing boards here also require criminal background checks and "good moral character" requirements.

But North Carolina law lacks a way for boards to discern whether a conviction is relevant to the job requirements. Was it a youthful indiscretion, or was it something that would mean the applicant is truly unsuited to working in that field? Right now, either can be used to disqualify an applicant on the grounds of moral turpitude.

Going further, North Carolina has 641 different disqualifications in state occupational licensing laws for having a criminal record, more than all the other Southeastern U.S. states except Florida: 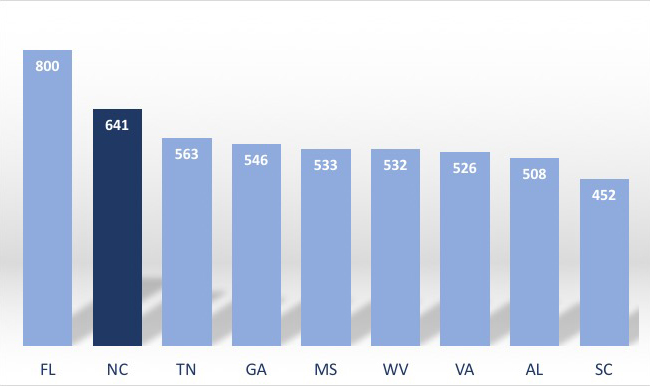 Meanwhile, about 15 percent of North Carolinians have a conviction record, and 22 percent of the state's workforce is required to have occupational licenses. In 2017, nearly 25,000 people were released from North Carolina prisons.

Think about those numbers in the broader context. When people are released from prison, they are considered "rehabilitated" and ready for re-entry into society. That they make the most of their second chance is very important for them as well as for society in general. One of the best ways for people to avoid going back to prison (recidivism) is to find employment.

So a clear way to reduce recidivism is for licensing boards not to disqualify an applicant merely for having a conviction record. A disqualifying conviction ought to be for something either directly related to the duties of the job or for egregious violent or sexual offenses.

Remember, this isn't a matter of nine employers turning down an applicant over worries about a conviction record, where the tenth decides to take a chance on him. Denying an occupational license denies entry in the job field.

The state doesn't let anyone take a chance on him. He can't even self-employ in the field.

Making it easier to access the right to earn a living

A bill before the General Assembly would make several important changes to how occupational licensing boards handle applicants with conviction records. House Bill 770 would:

•  require a board not to deny a license to an applicant with a conviction record unless it had "clear and convincing evidence that the applicant's criminal history is directly related to the duties and responsibilities of the job."

•  allow someone with a conviction record to petition an occupational licensing board "at any time" to find out if his record would disqualify him from receiving a license (importantly, even before he took on the expensive work of satisfying the board's licensing requirements)

Being able to petition the board "at any time" is a particularly strong reform. For people whose conviction record would disqualify them from the license no matter what, being able to find out beforehand would save them a great deal of time and money, let alone heartbreak. They wouldn't have to pay the tuition, sweat the classwork, study for (and travel to) the exams, and pay the exam sitting fees, only to find out at the last possible second that they never even had a chance.

It would also let the appeals process of an unfavorable decision start earlier.

Also, requiring boards to give a favorable consideration of Certificates of Relief would better honor the intent behind the certificates. As explained by the Legislative Analysis Division:

An individual may petition a court for a Certificate of Relief to relieve some of the collateral consequences associated with criminal convictions that could impede their reintegration into society. A petitioner may obtain a certificate of relief if he or she has three or fewer prior Class H or I felony convictions, as well as any prior misdemeanor convictions.

Such reforms would fight recidivism in North Carolina, broaden access to employment to people with conviction records looking to get back on their feet and expand entrepreneurship and competition in areas that need them the most.