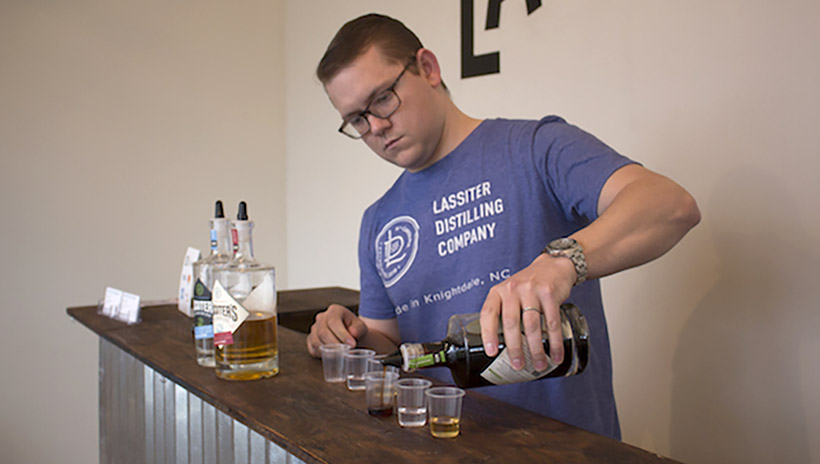 Gentry Lassiter at his distillery in Knightdale. | Photo: Kari Travis

A bill that would ease restrictive regulations on N.C. craft distillers is closer to becoming law.

The N.C. Senate on Tuesday, June 25, passed Senate Bill 290, Distiller Regulatory Reform Bill, 39-4. It was sent by special message to the House.

An amendment to the bill clarified some of the language in the bill and effectively delayed implementation for about a month.

The bill, if it becomes law, would significantly impact the state's distillers, aligning rules more closely with those governing wine and craft beer, industries that have grown exponentially throughout North Carolina in recent years.

The bill, maybe most important, would allow distillers to, much like ABC stores, sell to consumers without facing the current five-bottle-per-person annual restriction, according to state and local laws.

Many of the laws governing the production, sale, and distribution of alcohol in North Carolina go back to Prohibition. North Carolina, by some accounts, in the early 1900s had as many as 500 distilleries.

With the bill, Gunn said, a permit holder (restaurant or bar) can order a single bottle, which would be delivered to the local ABC store. If the local store cannot deliver the product, for whatever reason, the store will notify the commission within 48 hours, and the commission will allow the distiller to deliver an approved product to the ABC store for pickup, Gunn said.

House lawmakers filed a companion bill, but Gunn effectively took the lead on the measure. Gunn and Rep. Chuck McGrady, R-Henderson, have long been proponents of reforming the antiquated system and are among the sponsors of the most recent bills.